I published my blog yesterday as we were driving from Estes Park to Canon City.  Shortly after I posted it, we had a very scary experience.

We were still on I-25 and as we crested a hill, we saw traffic completely stopped in the left lane and everyone hitting their brakes.  We were in the center lane and there was traffic in the right lane.  Kevin was able to slow down considerably, but as we got closer, we saw the problem.  The left lane had a ladder laying across it with a car stopped in front of the ladder and another car had crashed into the front car.  The center lane had a step-stool laying in it.  Kevin tried to straddle it, but caught it with the back right tire of the truck.  We heard the noise as we hit it, but had nowhere to go as there were cars on both sides of us.

Everything seemed to be all right, so we continued on.  We were both pretty shook.  When we pulled off to get gas, we saw there was a hole in the camper right above one of the front jacks.  Luckily, the jacks are working.  As Kevin inspected the hole, he found the rubber foot from the step-stool stuck inside. 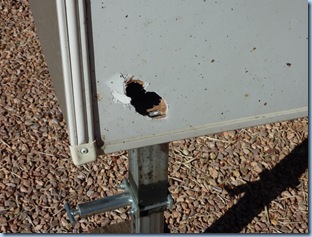 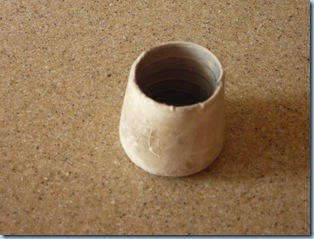 I really hope everyone around us was able to avoid an accident.  It happened so quickly, it’s really a blur.  So, it was unlucky that it happened at all.  But, I feel incredibly lucky that it wasn’t worse.  We really could have been in a serious accident.  I’m thankful that Kevin is such an excellent driver.  He did the best he could!

I’ve contacted our insurance company, and we’ll see what they say.  We’re not in an area where we can get it fixed, and we’re hoping to wait until we are in a place for a longer period of time.  Kevin has covered it with tape to keep water and creatures out of the hole.  Of course, if the insurance company wants us to get it taken care of sooner, we’ll just have to readjust our plans.

As I said yesterday, I hate interstates.  There seem to be more and more crazy drivers out there.  Whoever lost those ladders was nowhere to be seen and was responsible for a great deal of chaos.  Our 5-1/2 hour, 250 mile trip yesterday was quite stressful.  Defensive driving has become incredibly important.

Deciding which roads to travel is a real conundrum.  On the one hand, interstates are usually fairly flat and have gas stations readily available.  State and county roads can be just fine, but in a mountainous area like this, it can be risky to travel on them.

We’re staying at the Royal View Campground about 10 miles west of Canon City, Colorado.  This place is very well maintained with nice level sites.  We have full hook-ups with 50 amp service.  The cost with tax is $32.40 a night after the Good Sam discount.  There is free wi-fi, but it’s very slow.  Here’s the view outside of our back window. 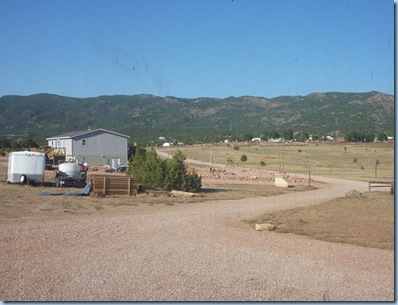 It’s been difficult finding inexpensive camping in these tourist areas.  That’s the price you pay for being a tourist :)

We’re looking forward to an enjoyable day today at the Royal Gorge.

Posted by RV Khronicles of Kevelyn at 10:00 AM 5 comments: Links to this post