Golf, Hikes, and a New Car

In my last post, I mentioned we were golfing in the Canadians versus Americans tournament here at the resort. It was a beautiful day with lots of sun, friends, and fun. Here are some of the American ladies sporting their red, white and blue attire. 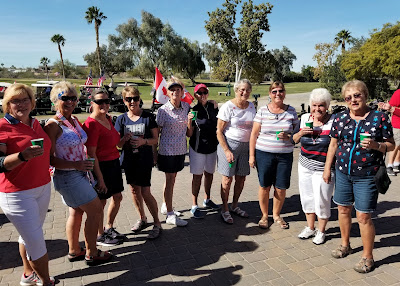 We played with a Canadian couple we had never seen before. With the over 1200 sites here, its amazing how often we meet new people. We had a great time, and lost our round by two strokes. The Americans lost overall, but it was close. Oh well, there's always next year.

On January 25th we participated in the 5K run/walk for charity at the resort. Lots of people participated, and the park provided refreshments and snacks at the end. It was fun.  Kevin and I are in that crowd near the left side. Wonder if anyone can find us! 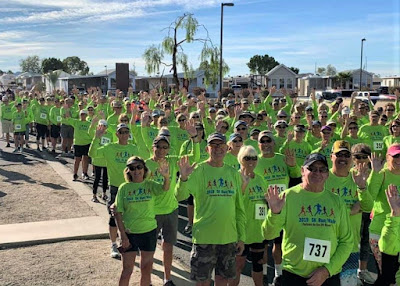 On February 4th, Kevin and I were the hiking club leaders. This year they are trying to get more people involved in leading the hikes so the same people don't have to do it every week. I was at the front, and Kevin brought up the rear to make sure everyone was okay. We had 39 people participate. 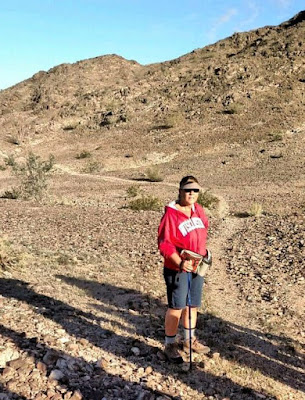 We hiked to an area in the desert with some petroglyphs. 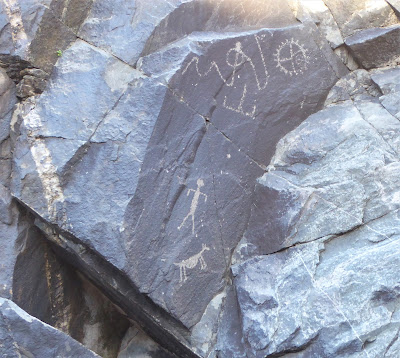 No one really knows how they got there. Of course, lots of people have ideas including that they are fake. However they got there, it was interesting to see them.  Here is the group at the petroglyph stop. We had to do some climbing and scrambling over rocks to get up there. 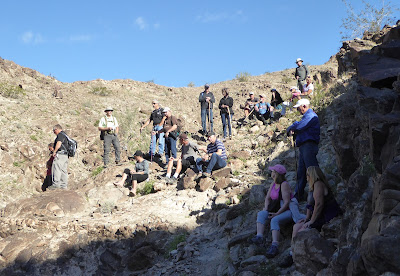 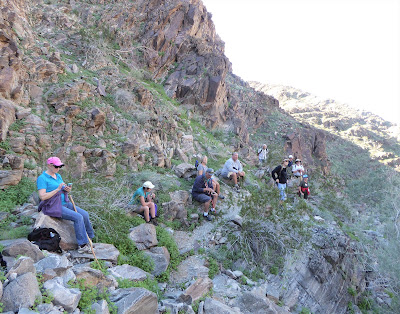 Our friends Dick and Wanda have been staying here in their motorhome since early January. Last Sunday Dick participated in the drive, chip and putt contest. He was third in his age category for the drives. Here he is working hard at chipping. If you look up the hill to the right of the red Wisconsin flag, you can see Kevin cheering him on from our back yard. 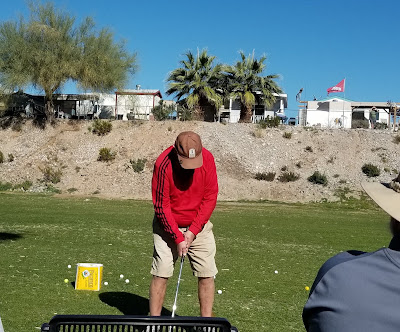 Last Saturday Dick, Wanda and I went to the Rodeo parade in downtown Yuma. The parade was for the Silver Spur Rodeo that was in town for the weekend. As expected, we saw lots of horses. Missing were any bands or musical entries. Here is the group from the Border Patrol. 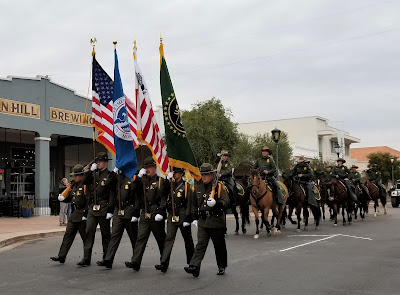 On Monday we joined the hiking group to hike to a cross on one of the foothills and to an old mine. We've hiked to both of these spots before, but not in the same trip. Here I am sitting on the bench up by the cross. No one seems to know how the cross got up there. 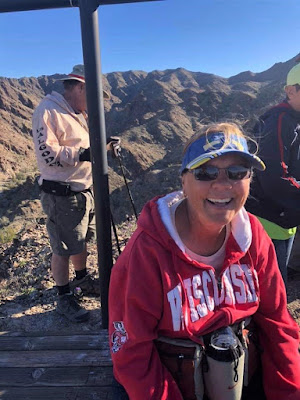 Here's that same cross from a distance. You can see we climbed up a bit to get there. (Click on the picture to enlarge.) 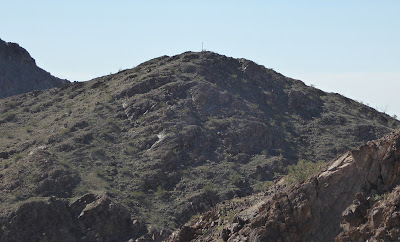 The path we took to get from the cross to the mine had a steep section with lots of loose rocks and gravel. People were going down sideways using their hiking poles. About half way down my front foot just kept sliding until I was pretty much doing the splits, so I just sat down. As long as I was down I scooted part of the rest of the way on my bottom. Of course, someone took a picture. Hey, whatever it takes to be safe :)  Looking at the picture it doesn't look nearly as steep as it felt!! 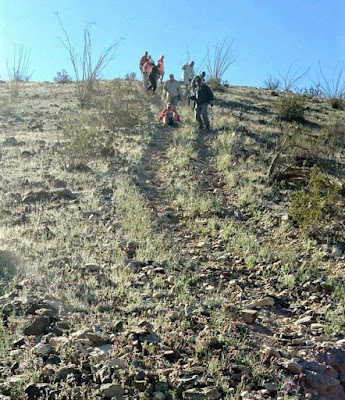 Since we plan on staying in Yuma about 8 months of the year, I had been wanting to get a car to keep here. I really don't like driving the truck, and I felt a car would save mileage and wear on the truck. We have the fifth wheel in a storage spot here at the resort, and the truck will also fit on that spot. Kevin didn't really think we needed a car, but we went out looking. We found a 2017 Hyundai Accent with 47,000 miles on it at the GM dealership.

This is the first time we have actually had to negotiate to buy a car. All of our married life, Kevin had always worked at a dealer. We would just decide what we wanted, he would tell the sales manager, and it would be ordered at the employee discount. I must say I did not enjoy the process of negotiating to buy this slightly used car. I can see why car salesmen have a bad reputation. I think we got a very good deal below the Kelly Blue Book lowest value, but what a hassle. Hopefully, this car will last a long time. 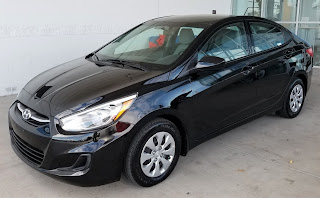 So, you can see we are still quite busy enjoying ourselves in Yuma. The weather has been cooler than average, but it's still better than most places we could be. The work on our house has slowed down considerably. The inside is mostly done. They still need to paint the outside. Our new cabinets are going to be done sometime in March. Hopefully, it will be done before we leave in May. The pace here is a lot different than we are used to. Definitely not the same work ethic as in the Midwest.

Don’t wish upon a star – Reach for one!
Posted by RV Khronicles of Kevelyn at 10:54 AM 1 comment: Links to this post