We’ve attended two Brewers games so far. Both days the temps were in the 80s, and the weather was great for sitting outside and enjoying a ballgame. Kevin says he’s now on vacation. Apparently, the cruise to Hawaii was my vacation and Spring Training is his :) Last Sunday the Brewers played the Giants. The final score was 1 to 1. Most of the time Spring Training games do not have extra innings, they just end in a tie. Yesterday the Brewers played the Athletics and lost 6 to 0. Our team had 2 hits and 4 errors. So far, I’m not very impressed with their performance. Hopefully, they’ll get all of the bugs worked out and perform better.

The weathermen had predicted high winds for yesterday afternoon. On our way home we saw this dirty cloud in the sky. I don’t know that I’ll ever get used to the sandstorms in the desert. 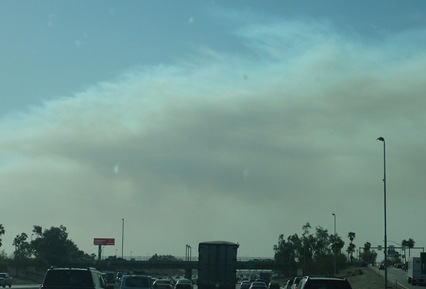 As we got closer to home, we saw what looked like smoke, but it was very orange and dirty looking, practically blocking out the sun. We weren’t sure what was going on. 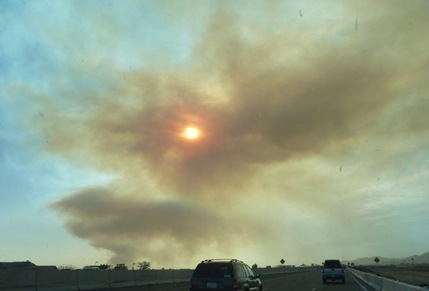 When we pulled into the RV park, we saw quite a few people outside looking at the sky. I turned on the news and this is what they were reporting. 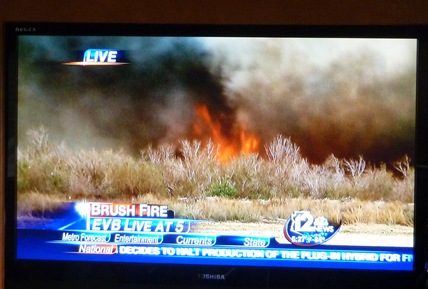 There was a brush fire several miles west of us. Luckily, the strong winds weren’t blowing it towards us. Apparently, a farmer decided to do a controlled burn, and it got out of control. No kidding, winds were predicted to be over 35 MPH. What an idiot. Here’s what it looked like from our window. 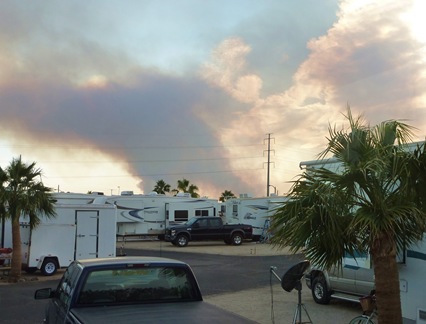 According to the news, the fire was not near any structures. The winds died down overnight, and they were able to get it under control after about 300 acres were burned.

There were 3 different wildfires reported in Arizona yesterday. Last year we were close to a fire in New Mexico, too. I guess every area has it’s weather disasters to deal with, but I don’t like these fires!

Posted by RV Khronicles of Kevelyn at 11:11 AM 2 comments: Links to this post