First, I’d like to welcome new followers Kate and Mike and Gina.  I started this blog almost exactly a year ago.  My original intent was to have a method of keeping family and friends informed of what we were up to.  I also was hoping to share some information for other “wanna be” fulltimers.  I found so many blogs to be invaluable while we were planning.

Never in my wildest dreams did I think that a year later I would have 47 followers and over 10,000 page views.  Or that we would actually have had 3 face to face meetings with wonderful people we’ve met through the blog.  This has become a travel journal for me, and I truly enjoy writing it.  Hopefully, those of you gracious enough to read it have found it at least somewhat interesting  :)

On Sunday we visited the Casa Grande Ruins National Monument.  It’s approximately 30 minutes from where we’re staying.  Sharon, our tour guide, did an awesome job of explaining the site and the history of the native people who lived there.

The main “attraction” at this site is the Great House which was 4 stories tall and 40 x 60 feet in size.  Wow!  In 1932 the National Park Service build the concrete and steel canopy to protect it. 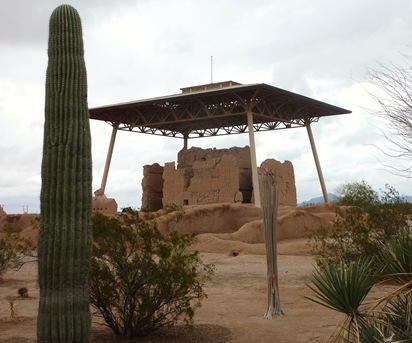 A thousand years ago the Hohokam people lived in this area.  They built miles of canals from the Gila River so they could grow crops of corn, squash, beans and cotton.  They built numerous villages throughout the area.  They traded with other people from as far away as Mexico, the Midwest Plains and the Pacific Ocean.  I’m just fascinated by how resourceful and innovative Native Americans were. 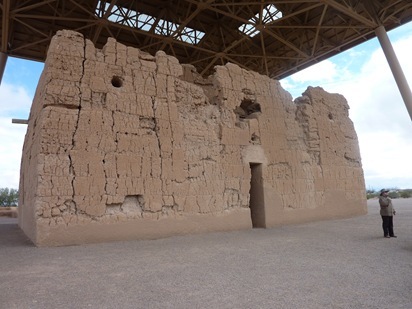 Another thing I can’t help thinking about is what kinds of “ruins” will people be looking at 1,000 years from now.  Will our civilization be long gone?  Will they be wondering what a McDonald’s or Wal-Mart was?  Will they find computer parts and wonder what they were used for?  History is just so amazing!

Kevin has seen enough ruins and rocks.  I think I’ve overloaded him since we left Wisconsin in September.  At least he humors me and comes along.

Late every afternoon we feel like we’re in the Alfred Hitchcock movie “The Birds”.  Hundreds of black birds line up on the power lines and in the trees behind our neighbor’s site.  They serenade us for a while and then they disappear into a row of Oleander bushes in another part of the park.  Fascinating! 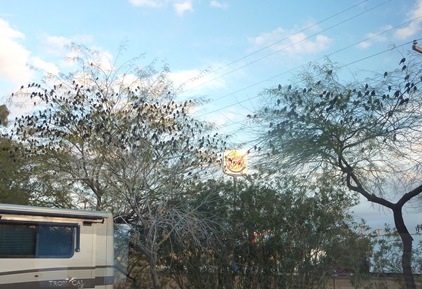 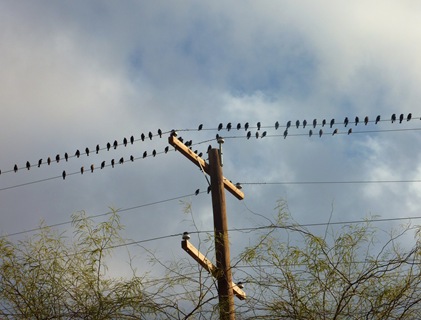