Kevin and I want to wish all of our family and friends a very Merry Christmas. Wherever you are, we hope you have the love and peace of Jesus in your life!

We attended a very unusual Christmas Eve service this year in Yuma. It was a live production titled Jesus Is Born at Champion Church. Over one hundred people participated in this live outdoor show enacting the birth of Jesus. The show is put on three nights and thousands of people attend. They have a huge set and lots of costumes. The first hour was very good telling the story of Jesus' birth. They did a great job tying in his birth to the rest of his life with the song "Mary Did You Know". 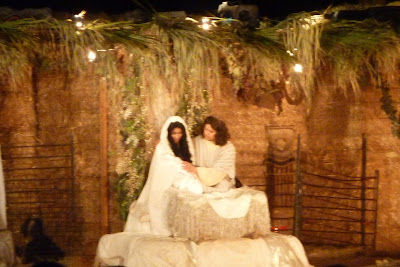 The last thirty minutes was certainly different. The Grinch, Minnie and Mickey Mouse and Mr. and Mrs. Claus all made an appearance. They were trying to share the message that Christmas is about the birth of Jesus, not all the other stuff people get carried away with. However, for me, I would have enjoyed it more without that extra portion of the show. Below you can see Mr. and Mrs. Claus and the wise men bowing to Jesus. You don't see that every day. 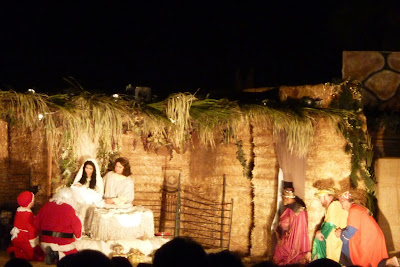 You've probably heard that this Christmas we will have a full moon; the first time since 1977 which happens to be the year we were married. I don't remember a full moon on Christmas that year. Two nights ago the moon rose just before sunset. It wasn't quite full, but still beautiful as it rose over the mountains. 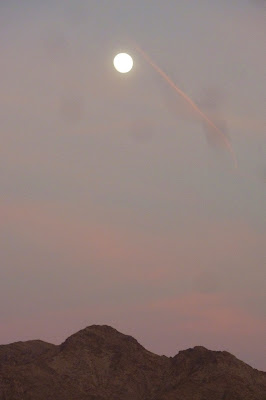 Last night it was nearly dark, however I still got a pretty good picture. There's even a star on the left. 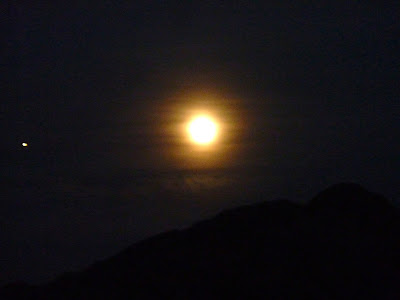 I wanted to share our little adventure from last Saturday as we returned from Long Beach after the cruise. I had read about the Salton Sea, so we routed our return so we could drive along the eastern shore of the lake which measures about 15 by 35 miles in size. This basin area was flooded by the Colorado River in the early 1900s. It became a popular tourist area in the 1950s and 60s and several towns popped up. The combination of decreasing water levels, increased salinity and fertilizer runoff from surrounding agricultural fields has caused the lake to deteriorate. Fish died off and the area smelled awful. Most surrounding towns have become ghost towns.

We stopped at Bombay Beach which is now a very rundown area with abandoned mobile homes. There is evidence of deteriorated piers along the shore. 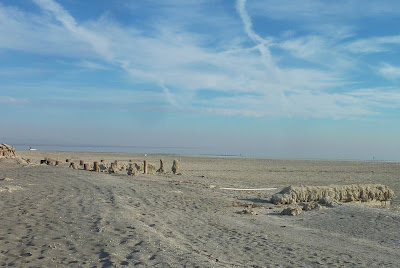 There were lots of dead fish and the smell all along the drive was foul. 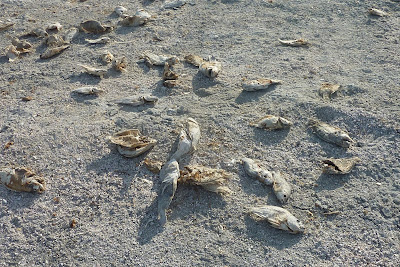 We saw just a few people in the entire town. This lone boater was pushing off. I wonder if he was going to try and catch some fish. 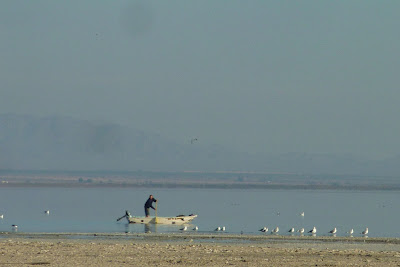 It was quite hazy over the lake on an otherwise clear day. I'm not sure if its always like that. California has a State Recreation Area along much of the eastern shore of the lake with a couple of campgrounds. We only saw a few campers. I can't imagine staying there with the smell. I'm sure it was a beautiful area at one time with the mountains in the background. There were lots of birds around. Its hard to see in the picture below, but the sand is in the front, birds are at the shoreline, the lake is behind the birds and the mountains are in the background. 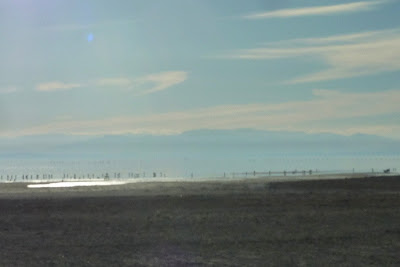 There was a young lady taking pictures, and we had a little conversation about the area. I thought she described it very well when she said it was epic in a dark way.

We will be having a Christmas dinner potluck with three other couples here at the park. Today's highs are supposed to be around 63 and sunny so that should make for a nice afternoon outside. Yesterday was a fantastic sunny afternoon. We played a round of golf on the course here at the resort. There weren't many people out there, so it was a nice relaxing round of golf. Too bad my score wasn't so great.

Tomorrow will be another story. A strong front is coming through and there is a wind advisory. We're predicted to have sustained winds of 30 mph with gusts of 40 to 50 mph. Time to hunker down! We have a tee time for tomorrow afternoon, but I'll be cancelling that.

Don’t wish upon a star – Reach for one!
Posted by RV Khronicles of Kevelyn at 9:24 AM No comments: