Snow On The Way to Arizona

We left Wisconsin on October 8th. We were actually lucky there was a break in the rain for us to hook up, as it had rained for days before we left.

We spent three nights at Big Woods Lake Campground in Cedar Falls, Iowa. Normally, we stay at George Wyth State Park in Waterloo, but they were closed due to the river flooding. Big Woods was a very nice county campground with full hook up, pull through sites and free wi-fi for $25 per night. We might just make this our place to stay in the future. We had a great time visiting with Kevin's brother and family. The weather continued to be lousy with rain most of the time we were there.

When you do a lot of traveling, you tend to see some unusual sites along the highways. These semis were at a rest area we stopped at. They were hauling the blades for those windmills you see. It's amazing how huge each blade is up close. You can see the size compared to the cars parked behind them. 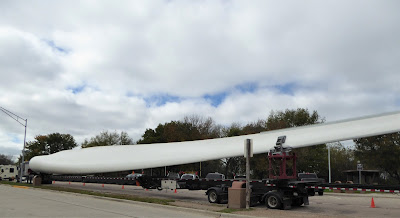 We arrived in Lincoln, Nebraska on Thursday to spend time with our son Korey and his wife Cathryn. They came for dinner on Thursday at the RV. We hadn't seen them since April, so it was wonderful to see and hug them again.

Friday evening we ordered pizza and watched the Milwaukee Brewers beat the Dodgers at their house. Saturday was a beautiful day with plenty of sunshine and temps in the mid 60s. Cathryn had to work, but we went to Costco with Korey and then visited the White Elm Brewing Company. They have been in business for two years. The guys said the beers were good. We watched the Brewer game in the afternoon; unfortunately, they gave up a lead and lost the game. When Cathryn got home we went out to dinner at Lazlo's.

Sunday brought a cold front through Lincoln. It started snowing around 9 am. We went to church where Korey was playing in the worship band. He wasn't happy I was taking his picture. Cathryn had to work again. 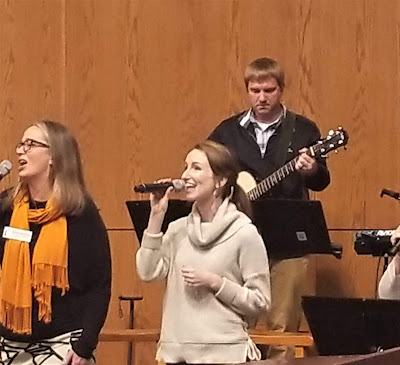 After church we went back to Korey's house. It was snowing hard. Luckily, we kept a snow brush in the truck. Total snow was about 3.5 inches. We played some games and watched some football on a cold and snowy day in mid October. Crazy weather again. 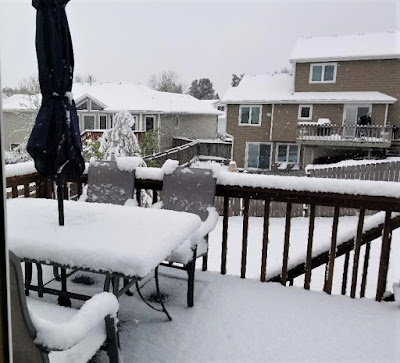 Cathryn got home early, so we went to Home Depot to buy them a chest freezer. They asked for one as part of their Christmas gift, and since we had the truck, we could pick it up with them. Then back to their house for dinner. It was so much fun spending time with our kids. We'll see them again in two months when we fly back to Wisconsin in December. They're coming too for Christmas celebrations with family.

Tonight we are in Big Springs, Nebraska for the night at McGreer Camper Park. It's a Passport America campground, so we only pay $18.50 plus tax. Nothing fancy, but full hook up, 50 amp, pull through, so perfect for one night. Still below freezing tonight, but it looks like the next few days will be sunny and warming up. Great driving weather.

Don’t wish upon a star – Reach for one!
Posted by RV Khronicles of Kevelyn at 6:27 PM 1 comment: Links to this post