Yesterday I was back at Eric’s house doing some painting on his garage. Last summer he redid the siding on his garage. It looked so nice, but the trim around the doors, the window and the top needed to be painted. As you can see, the paint was peeling. 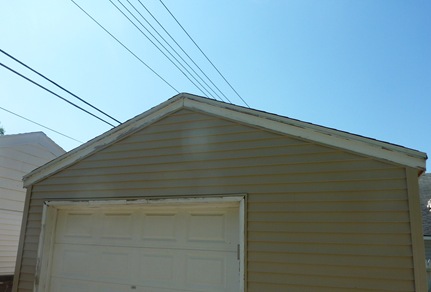 He left me a 12 foot ladder to get the job done. I had no idea how big a 12 foot ladder is. It was too heavy for me to lift so I managed to get it set up and then dragged it around the garage. The routine was drag the ladder a few feet to the next spot, climb up and scrape the old paint off, climb down and get the paint can, climb up and paint the section. Move ladder and repeat. That was a lot of climbing up and down the ladder which has me rather sore today. I guess I’m not as spry as I used to be :)

I got all of the trim painted with the primer paint. I will have to go back and do the top coat in a few weeks. Next time I told him to leave me a smaller ladder. The next coat should be much easier because I won’t have to do any scraping.

Eric is very appreciative of the work I’m doing for him. And while I’m there, I get to use his washer and dryer and do our laundry. So, everyone wins.

Last weekend was very nice here in the park. About half of our sites were occupied. We had a nice group of campers and the weather was great.

One day last week a large truck pulled up to the boat dock across the road. There was a large water tank on the back. Two guys got out of the truck and began scooping fish out of the tank. They filled a five gallon bucket and released the fish into the lake. All in all, they released five buckets of little fish into the lake. They told Kevin they were from the DNR and were releasing Northerns. 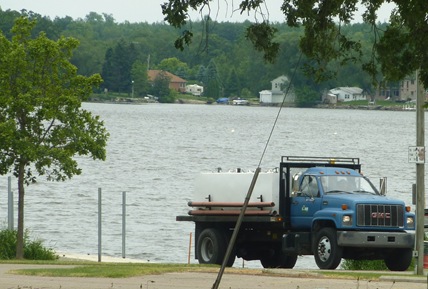 The birdfeeder continues to be a busy place. We have lots of little sparrows visit on a regular basis. They knock lots of the seeds onto the ground when they are at the feeder. I had some grape jelly on the ground under the feeder and some of the seeds got into the jelly. This oriole seemed to like it just fine. 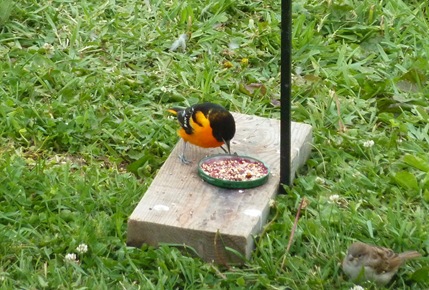 A blue jay also visited under the feeder. I’ve heard that they are very aggressive and mean birds. I think this must be true. Usually there are lots of birds around the feeder. But when the blue jay was there, no other birds came to the feeder. 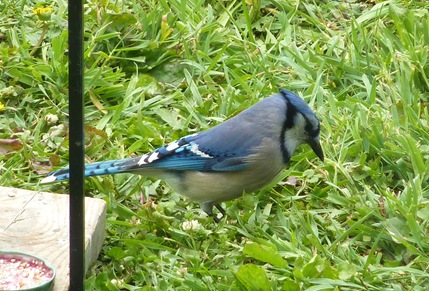 Yesterday there were two birds at the feeder that I’ve never seen before. At first glance I thought they were orioles. Then I realized that they had yellow heads instead of yellow chests. I did a little research, and I believe they are yellow headed blackbirds. Very cool. As you can see, the sparrows were right there next to them. 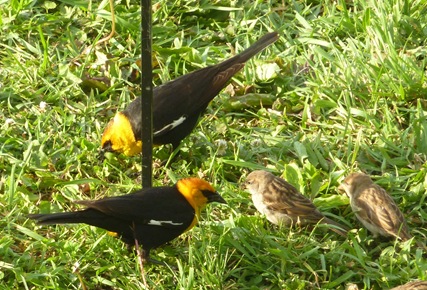 On Monday we golfed. We both had decent rounds. I am definitely playing better this year. I guess the saying that practice makes perfect is true. I’m far from perfect, but playing more than a few times a year seems to be helping my game. We had a great time.

I’m not a very political person, but I must say that I’m very happy with the results of yesterday’s recall election in Wisconsin. Regardless of your political affiliation, I was very disturbed by this entire recall process. I believe the laws regarding a recall were meant to be for someone who was guilty of moral misconduct in office. I don’t believe a recall should be allowed because a group of people didn’t like a policy that was enacted.

It’s great to see that the democratic process is still alive and well. The people have spoken. Hopefully, this type of foolishness is over once and for all!