Our Green Car Died...Or Did It?

As I've mentioned before, we've been using our 2000 Pontiac Grand Am in the summers when we're in Wisconsin. It has 218,000 miles on it, and has been an awesome car with virtually no problems ever. Kevin is very good at maintaining our vehicles, and I'm sure that's part of the reason it lasted so long. We've been storing it in the winters for the past seven years, but it has sure been nice having a second car in the summers. Our plan is to work one more year at the park in Beaver Dam, so were really hoping it would last through next summer.

A few weeks ago, it wouldn't start. It turned over, but just wouldn't fire up. We have Good Sam towing, so we had it towed to the GM dealer in town. As a side note, this was the first time we've ever had to use Good Sam. The entire experience was excellent. Of course, we weren't stranded on the side of the road anywhere, and we weren't towing; so it was an easy call. But, I'm still glad to know it was a good experience, because we've seen some bad comments about them.

The dealer checked things out, and said it was the fuel pump. The cost to fix it would be almost $600. Nope, the car is not worth it. Too bad, it finally died. Kevin called his friend Josh who participates in Demo Derbies and asked if he wanted it. Josh said yes, and they met at the dealer where Josh took it away on his car carrier. Good bye to a great vehicle!! 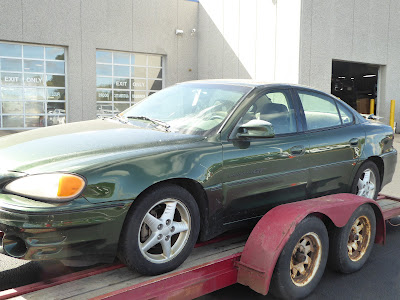 Of course, it did have a big dent on the other side where the deer hit me earlier this summer. It wasn't such a good year for this car after so many great years with us. 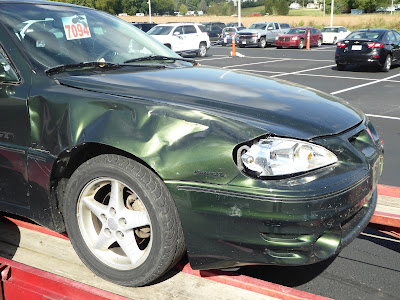 You may remember that when the deer hit me, Josh was one of the guys that came out to the park and pulled out some of the dent so it could still be driven without the fender rubbing on the tire. We talked to Josh last week, and he asked if we would still want to drive it next summer if he could fix the fuel pump. Well, yes we really would like that. So, this winter he is going to see if he can find a pump and fix it. Then, we could drive it next year, and we would give it back to him after that. Don't count this car out yet. It may have another life or two. Maybe it's part cat!!

The weather this fall has been fantastic. Much warmer than normal, and quite dry. Because of that, the trees are barely turning colors yet. That's rare for this time of year. The weather guys are saying there may not be much color at all. I'll take the nice weather, if I have to choose. There is one tree near us that is looking quite pretty. 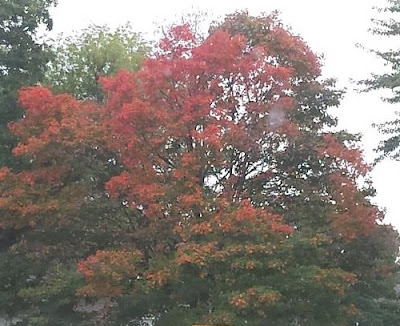 The sun isn't coming up until almost 7 am these days. I've enjoyed seeing some gorgeous sunrises the last few weeks. It was much prettier than the picture shows. 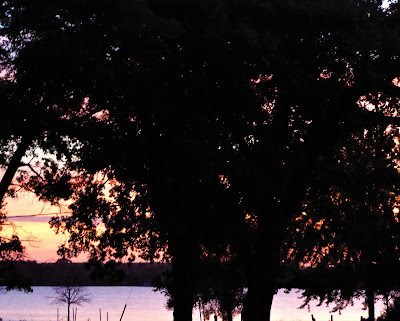 Tomorrow we're leaving and slowly making our way to Arizona. We're starting out by spending three nights in Iowa to visit Kevin's brother's family and our friends John and Janie. Then four nights in Lincoln, Nebraska to visit our son and daughter-in-law, Korey and Cathryn. Then five more nights on the road until we get to Yuma. We don't want to be driving too much in one day, as we have lots of time.

We'll only be in Yuma five days, and then it's off to Mexico for a family vacation. Lots of fun times ahead!

Don’t wish upon a star – Reach for one!
Posted by RV Khronicles of Kevelyn at 4:08 PM 6 comments: Links to this post