We left Yuma Wednesday morning for a three hour drive to Leaf Verde RV Resort in Buckeye, a western suburb of Phoenix. We're here for two nights as we slowly make our way north to Wisconsin. It snowed there yesterday, and they are expecting more snow tomorrow. Don't want to move north too quickly!! 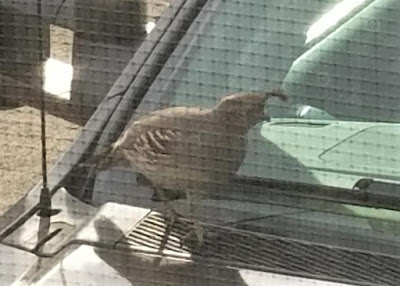 As I sat back down I saw one on the ground which I thought was the one that had been on the car. Then I caught another glimpse of one on the truck. My eyes must be playing tricks on me because it looks like he's inside the windshield. Oops, Kevin left the driver's window open last night. Sure enough, the quail was walking back and forth along the dash. Too funny. Again, not the best picture; it's through the RV window and the truck window. 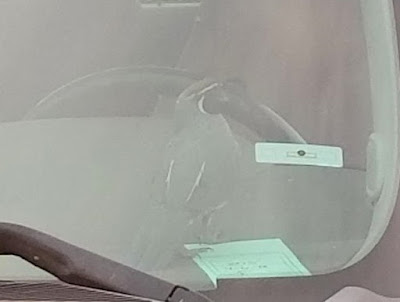 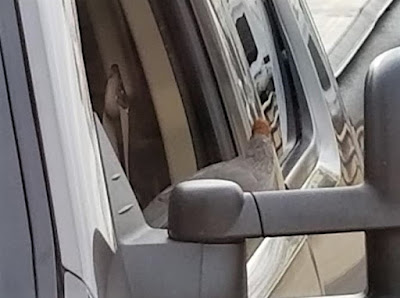 Here's the culprit making a getaway with his partner. He was nice enough not to leave us any presents inside the truck. I had a good laugh early in the day. 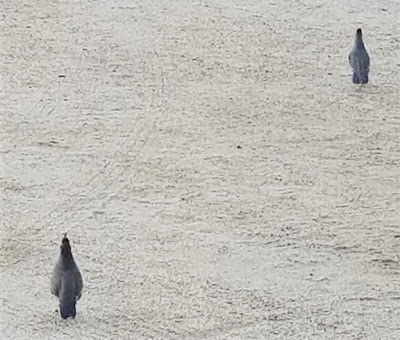 Before we left Yuma, we wanted to stock up at Walmart on a couple of 1.75 litre bottles of Southern Comfort. It's about $6 less per bottle than it is in Wisconsin. The closest Walmart was out of them. Oh well. A few days later we were running errands on the other side of Yuma, so we stopped at the other Walmart to stock up. They were completely out too. What's up with that??

I don't want to point any fingers, but there are a lot of Canadians that winter in Yuma. Their liquor prices are extremely high at home, so I know they stock up with as much as they can legally bring across the border. Those Canadians must really like SoCo. Other brands were readily available at both Walmarts.

Today we needed to shop for a few groceries at the Fry's store in Buckeye. By the way, Fry's is a Kroger owned grocery store, and is one of our favorite grocery stores anywhere in the country Fry's had the SoCo, but their prices aren't any better than in Wisconsin. There is a Walmart across the street, so we popped in. You won't believe it, but they were completely out of the 1.75 litre bottles of SoCo as well. Is there a national shortage we haven't heard about?

Now we're on a mission. Tomorrow we head to Homolovi State Park in Winslow, AZ for one night. There is a Walmart nearby. You bet we will be checking to see if they have any. That's our last stop in Arizona, so if they don't; we're out of luck.

Don’t wish upon a star – Reach for one!
Posted by RV Khronicles of Kevelyn at 8:19 PM 1 comment: Links to this post