Yesterday the sun finally came out and temperatures climbed into the 60s. We took advantage of the nice weather and took a tour of St. Joseph Plantation in Vacherie, Louisiana, which is about 30 miles west of New Orleans.

River Road runs along the Mississippi River and has several plantations open for tours along it. In its prime, there were over 1,000 plantations along this stretch of the river.

I had another Groupon coupon for this tour so it was $15 for the both of us. Tours of a couple of the more popular plantations go for $120 per person if you go on a tour bus. I think we got a very good deal, and the tour was very interesting.

St. Joseph Plantation is still a working sugar cane operation. They have about 2,500 acres which are planted with cane. The plantation is still owned by family members, but no one has lived in the house since the late 1990s. 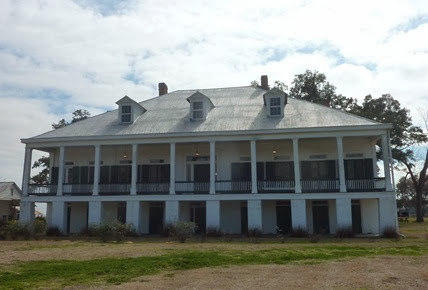 First, we watched a short video about sugar production. It’s quite an involved process getting those sugar granules from the cane. Sugar is a big business in Louisiana and brings almost 2 billion dollars to the state’s economy each year and provides about 32,000 jobs. I had no idea.

The inside of the house has been restored pretty well. Our guide told us interesting facts about the area and the history of the property. Here’s the front entrance hall. 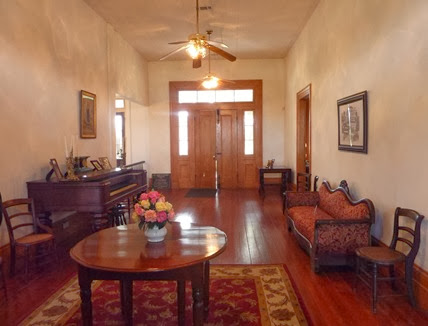 The house was built in the early 1800s. In 1856 the land, house, slaves and all household furnishings were sold for $72,000. After the civil war, it was sold again at a sheriff’s sale for $25,000. Sounds like the housing collapse of just a few years ago.

The families that lived there were all wealthy and had the latest conveniences for their time. I’m glad I live now. Their conveniences didn’t look too great to me (chamber pot comes to mind).

There are still original slave quarters on the property. Here’s one of them. These houses were shared by more than one family. Notice the large live oak tree out front. There were several of these beautiful trees on the property. 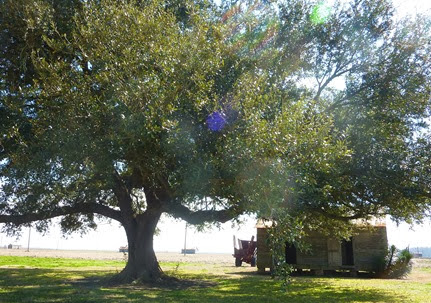 After our visit, we drove to the neighboring plantation called Oak Alley. This is the most popular tour bus destination.  I was happy with our choice of the less touristy house.

Here’s Oak Alley. Can’t you just imagine driving along that road in a carriage. It must have been pretty awesome! 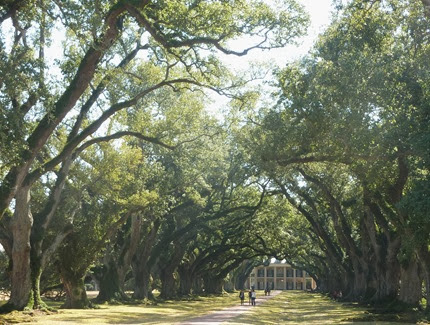 We have some interesting neighbors next to us at the RV park. 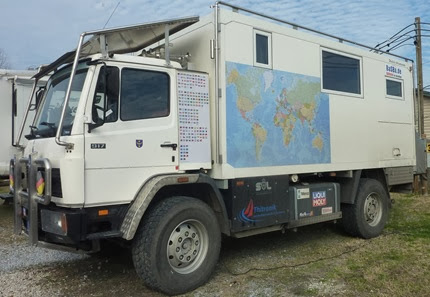 This rig has German license plates and a web address across the top of the windshield. I looked at their webpage. They are a middle aged couple from Germany and are on a ten year world tour which they began a little over a year ago. They purchased a used municipal vehicle and had it rebuilt into this off road RV. The map on the side of the rig has a blue line which shows where they’ve been. So far, they’ve been in Europe, had it shipped across the Atlantic, traveled across Canada, visited Alaska, and toured many of the states along the western part of the US.

I haven’t had a chance to meet them. It would be fun to speak some German again, although their English is probably better than my German. They are traveling with another couple who are in this truck camper. They also have a world map on the side of their rig. I wonder how much it costs to have an RV shipped across the ocean??!! There are certainly some very adventurous people in the world! 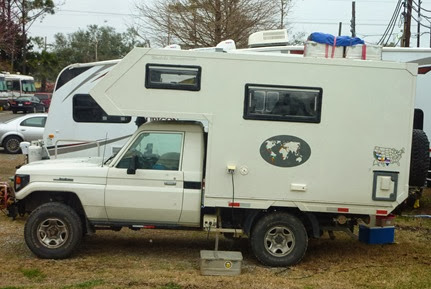 Posted by RV Khronicles of Kevelyn at 5:36 PM No comments: