Yesterday started with a breathtakingly beautiful sunrise over the Gulf of Mexico. I thoroughly enjoyed watching from the comfort of inside our fifth wheel. It was still rather cold outside. Kevin slept through the whole thing :) 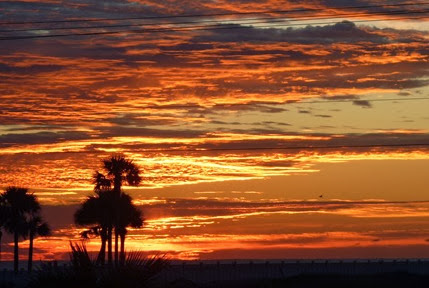 The sun came out and temps warmed into the 40s. Much better than our northern friends, but record lows were set all around this area in the last few days. It was my idea to tour the Gulf Coast this year. Kevin wanted to go to Arizona again. I’ve been reminded of that a few times.

We headed to the port area again yesterday to tour the Ocean Star Offfshore Drilling Rig Museum. The museum is built on the platform of a retired jackup drilling rig. They had a senior (over 55) rate of $5 to tour the museum, and we felt it was definitely worth it. Too bad parking is so expensive in the area. It cost us $12 for three hours of parking.

I had a coupon from a local tourist brochure I got at the campground so we received the audio tour for free ($5 value). Each of us listened to parts of it. It was interesting, but sometimes just more information than I wanted to hear. You could read most of it on the signs along the way, too.

We watched the introductory movie which explained how the rigs are built and gave an in-depth explanation of the drilling process. Some of it just went right over my head, but it was a good introduction.

There are a number of models of ships and drilling platforms used in the industry. This museum rig was able to go down to a depth of 200 feet. Some of the newer platforms can drill thousands of feet down. 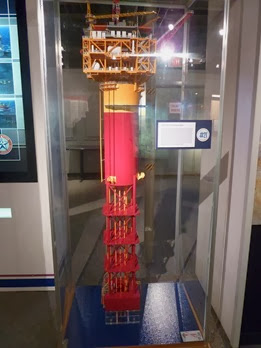 This is a model of the Devils Tower Spar Platform. It sits in 5,600 feet of water in the Gulf of Mexico, and can produce 60,000 barrels of oil per day. Notice the small chains running down from the yellow to the red painted areas in the model. They are quite small and can hardly be seen. (Click on the picture to enlarge). 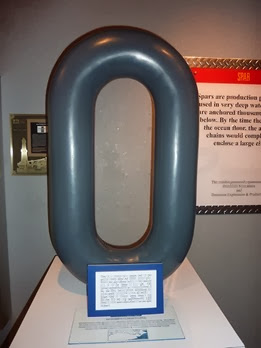 Here’s what each link of the chain actually looks like in full size. That gives you an idea of just how huge these platforms are!

The next picture is of some of the drill bits used in the drilling for oil and gas. That’s my cell phone on the table to give you an idea of the size. Not the drill bits found in the average tool box. 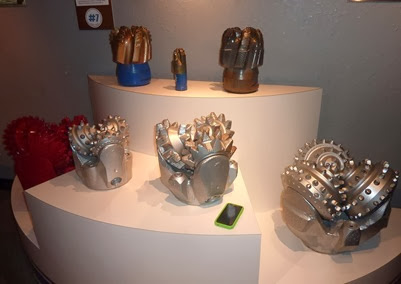 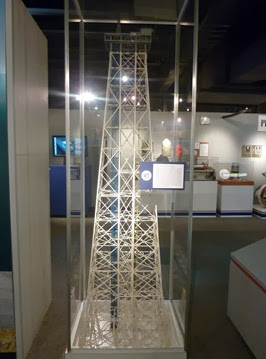 This platform is called The Bullwinkle. It sits in 1,400 feet of water off of Louisiana. The base covers 4.5 ACRES of the seafloor.

I found this diving suit to be very interesting. It keeps the diver at the same pressure as at the surface, so they don’t have to go into the decompression chamber when they come up to the surface. It works the same as how airplane cabins are pressurized. The technology has actually been around for a while, but I’d never heard of it. Today, most repairs are done by robots controlled from the surface, so there is not much need for divers. 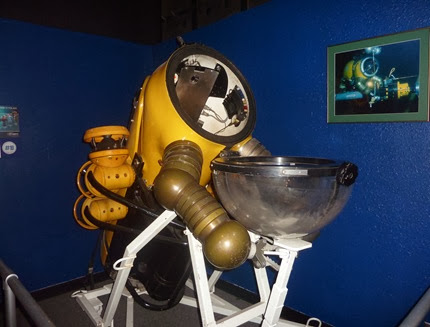 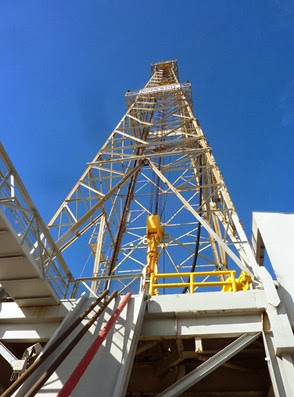 We went outside to look at the actual platform. Everything is so big. Just take a look at the tower.

There were videos showing how they build these huge platforms on land, transport them by barge to the drilling location, and then somehow get them in position. Amazing engineering and technology. I have a newfound admiration for this industry.

I know there is a lot of dissention regarding oil drilling and all that is involved with it. Did you know that the industry pays $4.3 billion a year to the Federal government for leases. And, that for every one oil rig worker, there are 10 jobs in related industries. I sure don’t like fuel prices, but I had no idea what was involved in the exploration and drilling operations. It is a very expensive undertaking.

On the way home, we drove along Seawall Blvd. in Galveston. There is a 10 mile walking/biking path along the Gulf. What a great place to spend some time if the weather were a little nicer. There is even an amusement park on one of the piers. It reminded me of pictures I’ve seen of Coney Island. 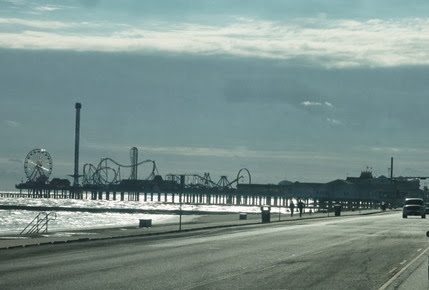 We enjoyed our visit to Galveston. It would have been nicer if the weather was warmer, but that’s how it goes. I don’t know if we’ll ever come back, but I’m glad we spent a week here.