It sure is windy and hot today. Feels more like July or August. We’ve had wind gusts near 50 mph and the high temp was 88 degrees. Thunderstorms are predicted for tonight, and more hot weather is forecast for the upcoming holiday weekend.

We are completely booked for this weekend. I’m sure we’ll be quite busy. It’s so nice during the week when we have the park pretty much to ourselves :) 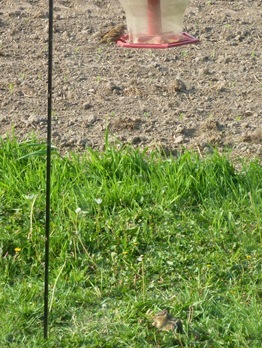 There’s been quite a bit of activity at the birdfeeder. Even the chipmunks are getting fed. Here’s a shot of a bird at the feeder and a chipmunk enjoying the goodies down below.

In my last post I had a picture of a duck’s nest. A few days after that post, I noticed the mother duck wasn’t flying up when I walked past the nest anymore. I found the nest and saw that four of the eggs were gone and the others were broken. I think some creature had a duck egg dinner. I don’t think they would have hatched and left the nest that quickly. For some reason, it made me feel sad.

Last Sunday night there was supposed to be an eclipse of the sun. The news said that we wouldn’t have a total eclipse in our area, but they certainly were hyping the event.

I kept running to the window to take a look, but never really saw much of an eclipse. It did look like there was a half moon shape coming up from the bottom, but then the sun went down. Here’s what it looked like. Nothing much to see. 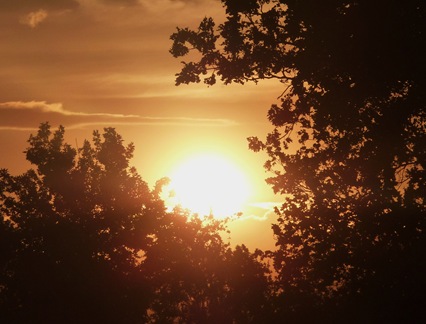 Not much else going on. Kevin’s been working. I spent a day at Eric’s house and finished stripping the rest of the wallpaper and did our laundry. Wednesday afternoon I did my four hours of volunteering at the hospital. We’ve settled into our summer schedule.

I’ll probably only be posting about once a week during the summer. No need to bore everyone with the same stuff every week. Of course, if something exciting happens, I’ll let you know :)

Have a wonderful Memorial Day weekend!