Some Relief and a Very Good Game

On Saturday we finally got some relief from the heat. After four days in a row with 100+ temps last week, this week is forecast to be in the mid to high 80s. That’s actually still above average, but at least we can go outside again. Last week was just too hot to be out there.

Wisconsin and much of the country are suffering from drought conditions. Governor Walker declared a state of emergency for 42 counties in our state today. Crops are withering all over the place. I feel bad for the farmers. I heard today that the country set a record for the warmest first six months of the year. Makes me think there is truth to the global warming theory.

Of course, with that many days above average, I’m thinking there will come a time when temperatures are below average. I hope it’s not in Texas this coming winter :)

Today we finally went golfing again. It had been a while due to the hot, hot, hot temps. We played at Kestrel Ridge Golf Course. We’ve played there many times before. Usually nine holes on a weekday takes us about 1.5 hours. Today took 2.5 hours. There were some super slow groups in front of us. Both of us still managed to have good games.

I actually had my best score of the season. I’ve been golfing off and on for many years. I used to only play a few times a year, and my scores were always in the high 60s to low 70s. Since we started our full-time life, we’ve been trying to play once a week during the summer. There are two courses in the area that I like. My scores have been slowly improving.

Today I shot a 60. That may not be so good compared to most people, but for me its very good. I had two bad holes. The other seven were very good. Just imagine what my score would have been if I hadn’t had those two bad holes. I’m actually beginning to enjoy golf and look forward to going again.

Yesterday I went to a craft fair in the park in Beaver Dam. There must have been over 100 exhibitors. My sister-in-law, Laura and her sister were among them. Laura makes all things Victorian. She had some beautiful items for sale. It was a nice day for all those people to sell their crafts. The previous three years this show has had rain. 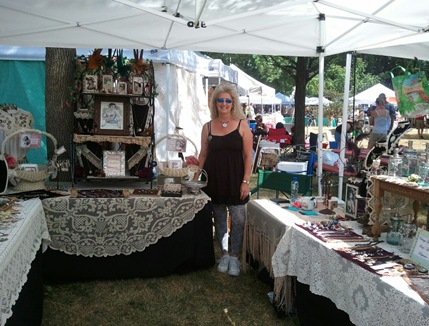 For many years my mom and I used to do craft fairs. I enjoyed looking at what people created and would sometimes buy something that struck my fancy. I didn’t buy a single thing yesterday. I still like to look, but most things don’t interest me anymore. I’ve decorated our home the way I like, and don’t have room for anything more. There were a few items I might have liked, but nothing I was willing to open my wallet for. 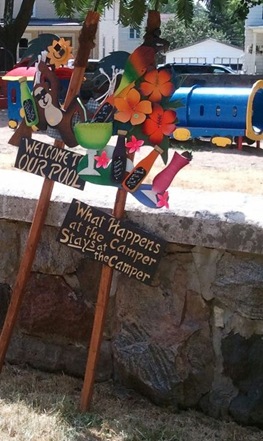 I did think this outdoor decoration was pretty funny. I thought the sentiment only applied to Las Vegas, but apparently campers are included. Very cute!

Posted by RV Khronicles of Kevelyn at 7:08 PM 3 comments: Links to this post