Today is our 34th wedding anniversary.  I remember my uncle saying our marriage wouldn’t last for more than six months because I’m Lutheran and Kevin is Catholic.  I guess he was wrong! 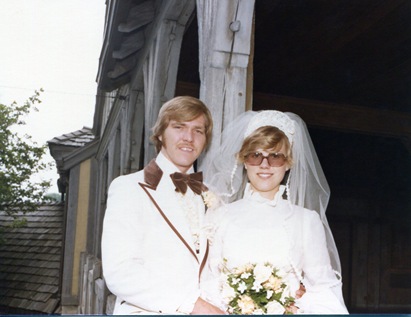 Wow, were we young or what! Of course, every relationship has it’s ups and downs.  Then, you throw two children into the mix, and things happen.  But, all in all, those thirty-four years have been very happy.  I wouldn’t trade any of them.  Thanks, Kevin, for being such a wonderful husband!

Last night we went to the Beaver Dam Country Club for fish fry.  They have an all you can eat special with baked and fried fish and broasted chicken. The regular price is $9.95, but it’s only $8.95 between 4:30 and 5:30 pm.  That was perfect since we didn’t want to be gone too late in case anyone wanted to buy firewood.

Unfortunately, the food was mediocre at best. Also, once our waitress brought us our order, she never checked back.  When we were done, she brought the check.  She never asked if we wanted more.  Kevin asked her if it was, in fact, all you can eat.  She said it was, and did we want any more.  We said yes, she took away our plates, and then only brought one plate with the fish on it.  She did go back and get me another plate, but she had taken my fork so I ate my last piece of fish with a spoon.  Mediocre food and poor service; we won’t be going back.

The weather continues to be ridiculous.  Last week we had two days of records highs near 100 degrees.  On Wednesday evening a storm came through and our temperatures have plunged into the 60s during the day and 40s at night.  We had the air on non-stop for two days, and are back to the furnace at night.  As I said, ridiculous!!!! 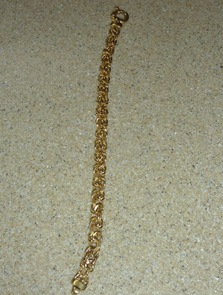 I had an interesting jewelry experience this week.  Four years ago when we were in Italy, Kevin bought me a beautiful bracelet in Florence.  It was for my 50th birthday. I absolutely love it, and wear it all the time. Unfortunately, one of the links broke, and it needed to be repaired.

I took it to Ferber’s Jewelers, the only jewelry store in Beaver Dam. They quoted $50 to $100 to fix it.  I left it there and got a call a few days later saying it was too broken to fix, but they offered me $125 in gold value if I wanted to sell it to them. I said no and picked it up.

On my way to Eric’s house last week, I dropped it off at Robert M Jewelers in Menomonee Falls.  They quoted me $35 to fix it and said it would not be a problem to make the repair.  I asked the guy how much he thought it was worth.  Kevin had paid $500 American, but I always wondered if we had overpaid because the dollar was worth less than the euro.  The jeweler said his estimate was it was worth $1,100.  Good thing I didn’t sell it for $125, not that I ever would.

When I picked it up, they only charged me $25 for the repairs and they had cleaned it. It looks like new again!  I’m so glad the first jeweler said they couldn’t fix it.  I certainly would never go back there!

We watched a pretty funny movie last night.  It was called “You Again” with Jamie Lee Curtis, Betty White and Sigourney Weaver.  A bit over the top at times, but overall a funny movie.