Happy 4th of July everyone! This holiday has special meaning for me.  As I have mentioned in the past, I was born in Germany.  My parents immigrated when I was 11 months old.  They arrived in New York Harbor on July 3, 1958.  My mom has told me often how she held me up as we passed the Statue of Liberty so I would be sure to see it.  She grew up in communist East Germany so understood what it was to look upon that symbol of freedom!

My parents became citizens when I was in 8th grade which automatically qualified me for citizenship as well.  I am very proud to be an American citizen!!! 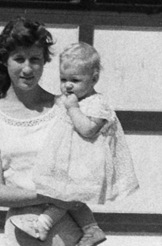 Here’s a picture of my mom holding me shortly after we arrived in the United States.  Their first years were much harder than they had expected.  The streets were not paved with gold as advertised.  However, they worked hard and made a good life for us.

On Wednesday, Kevin and I went golfing at a nearby course I had not been to.  It’s called Fox Lake Golf Club and a couple of the holes have a view of Fox Lake. 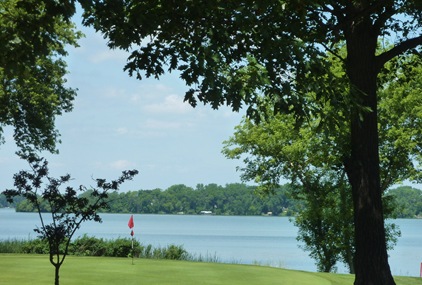 It was a nice course. Not too long which I like, and they have a weekday special of $14 for nine holes with a cart.  I actually had a decent round.  We’ll definitely be going back.

Surprisingly, our campground was not full for the holiday weekend.  About two-thirds of the sites were reserved.  We ended up with some people without reservations for some of the nights.  Overall, it was a nice weekend.  Everyone behaved.  The weather was pretty hot.  The only thing that would make this campground better would be a swimming beach.  We have a boat launch and a fishing pier, but the water looks too dirty to swim in.  I think the boats churn up all the gunk from the bottom of the lake. All but two of the sites are again vacant.  Back to peace and quiet.

For the past several years we have camped with four other couples over the 4th of July weekend.  This year we couldn’t go because of our camphosting duties.  They are about 1-1/2 hours away from us and are all staying through tomorrow night. So, tomorrow we’re driving up to visit with them for the day.  It should be a good time.

I wanted to show you my little garden.  It has certainly grown since the last picture I showed you.  The beans, lettuce, tomatoes and cucumbers are doing very well.  I planted peas twice and only had three plants come up.  The green peppers aren’t looking too healthy either.  We’ve had several meals using the lettuce.  So, all in all, I’m happy with how it’s doing.  Next year, I think I’ll start the peas indoors instead of starting with seeds outside. 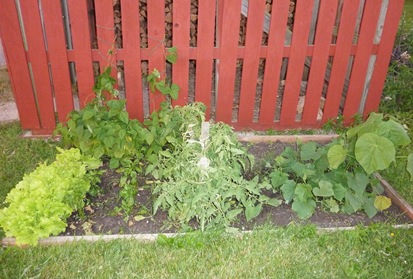 Posted by RV Khronicles of Kevelyn at 6:24 PM 2 comments: Links to this post