Our first stop was Bandelier National Monument, which is about an hour west of Santa Fe.  It’s in a mountainous area that reminded me of some of the scenery we saw in Colorado.

This monument contains ruins of a pueblo of the Ancestral Pueblo people.  Part of their pueblo was built on the ground and part of it was in caves dug into the sides of the cliffs.  Here’s what remains of a 400 room section called Tyuonyi.  The hole in the middle is a kiva. 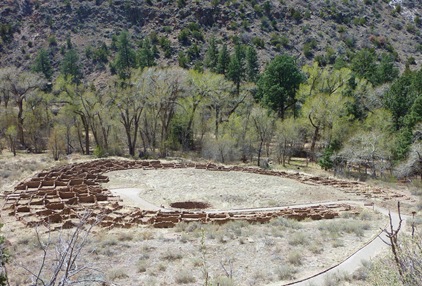 They also had many dwellings in the cliffs.  They dug caves into the cliff and built an adobe entrance in front of it.  Here’s what’s left of those dwellings. 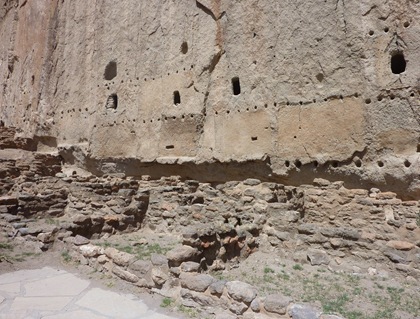 Some of these cave dwellings were 2 or 3 stories high and there were several caves in each dwelling.  It’s believed the caves were used for sleeping and storage, and the daily living was done in the area in front. 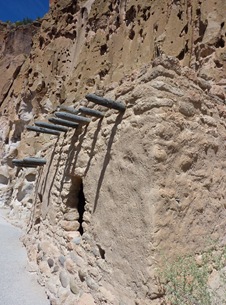 The Park Service has re-built a replica of one of the entrance rooms. A few of the caves have ladders you can climb to take a look inside.  There’s not much to see.  There are holes in the floor which were believed to have been used to anchor looms for weaving. The people living here were of the same group as the people who built the cave dwellings at Mesa Verde in Colorado. 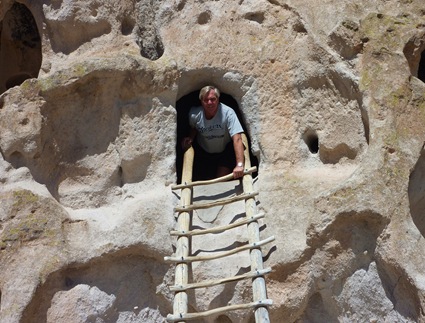 From Bandelier we drove through Santa Fe to Pecos National Monument.  Here there are more pueblo ruins.  This site was similar to the Salinas Missions we saw.  The Spanish came to this area as well and built a mission in the early 1600s. 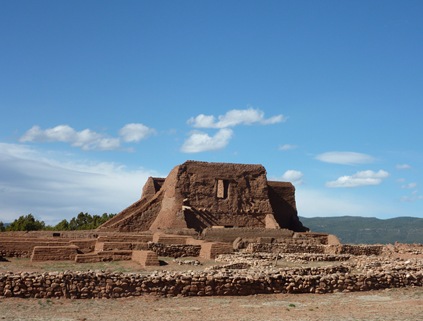 Other than the mission, much of this pueblo has not been excavated.  It’s amazing to walk around and see hills of grass and realize that under all those hills are the ruins of people’s homes.

A kiva has been restored so we climbed down to take a look. 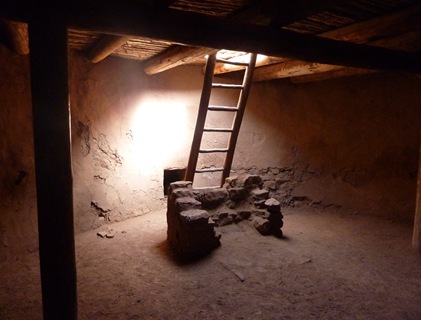 We have seen many kiva’s all over the southwest.  These rooms were thought to be ceremonial rooms for many of the native cultures.  Here’s a look from the outside. 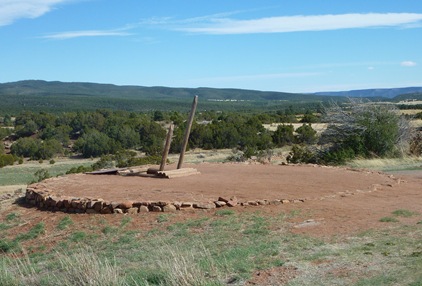 The people of this pueblo lasted much longer than some of their neighbors.  They actually lived here until the early 1800s.  However, the Spanish, pioneers, drought, famine and disease finally forced them to leave.

Yesterday we went to Petroglyph National Monument.  There are thousands of petroglyphs in a 17 mile area of land here in northern New Mexico.  Most of them have been etched into volcanic rocks.  All the other petroglyphs we have seen have been carved into the sides of cliffs or caves.  These are the first we’ve seen on rocks. 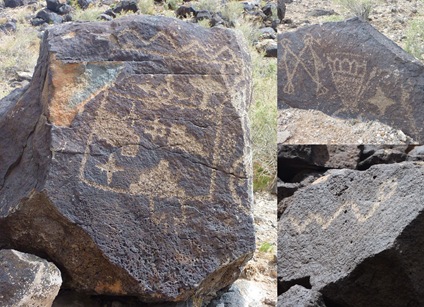 Kevin has a Kokopelli keychain.  We found his ancestor on one of the rocks.  (Kevin is holding the keychain in the right corner of the picture.) 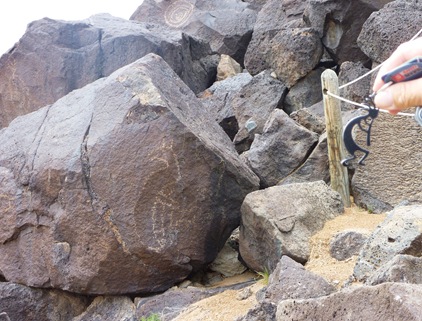 As we were walking between the trails, we heard a clicking noise.  All of a sudden there were about six roadrunners running across the road.  Here are a few pictures.  Boy, they sure are fast.  It was so cool to see them even if I couldn’t get a close-up. 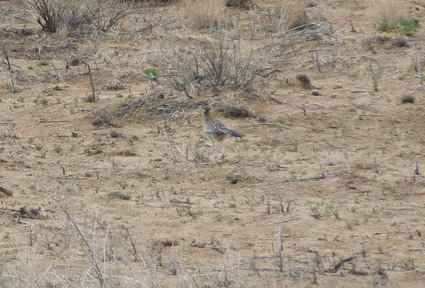 These two were either playing or fighting with each other.  They’d fly at each other and ruffle their feathers. 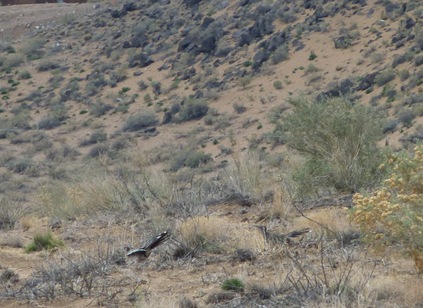 They are much smaller than the one in the cartoon, and we didn’t hear any of them say beep-beep :)

We had a question regarding our RV negotiating the other day.  We were asked if we thought the mark-up was 30%.  In our experience of buying several new Jaycos over the past 30 years, we have always been able to pay around 30 to 33% below list price.  Our last purchase was 37% off in 2008 when the RV industry was in big trouble.  This salesman tried to tell us the mark-up was 10%.  We almost laughed in his face. We offered him 32% below list price with a credit for our trade-in of the NADA blue book price, but they weren’t interested.  Oh well.  It was a want, definitely not a need.

Also, I’d like to update you on the wildfire we witnessed last weekend.  When we left on Sunday we could see smoke still coming from the area.  That fire has burned all week, and is now considered 70% contained.  It has burned over 3,000 acres, but did not destroy any homes.  There has been another fire burning just south of Albuquerque which has destroyed over 10,000 acres and 5 homes.  It is extremely dry here.  We had a little sprinkling of rain last night and today, but they need more.  And the winds just keep on blowing.

Posted by RV Khronicles of Kevelyn at 9:12 AM 3 comments: Links to this post