Yesterday we headed about 30 miles north to the city of Surprise, Arizona to attend a game between the Brewers and the Texas Rangers.  Surprise is a newer city and looked like a very nice community.  There were great looking schools, neighborhoods, shopping areas and parks.  It looked like a nice place to live.

The ball park is home to spring training for the Rangers and the Kansas City Royals.  It’s quite a bit bigger than the park the Brewers play at.  I’m not sure I liked that.  The Brewers park has such an intimate feel to it.  You feel like you can practically reach out and touch the players.

We bought lawn seats for $7 each.  It was another hot day.  Luckily, some high clouds were overhead.  The clouds along with a slight breeze made sitting in the sun pleasant.  There was no shade available for the lawn seating.  That’s not a good thing.

Here’s the view from behind home plate.  We’re sitting on the grass behind left field under the scoreboard. 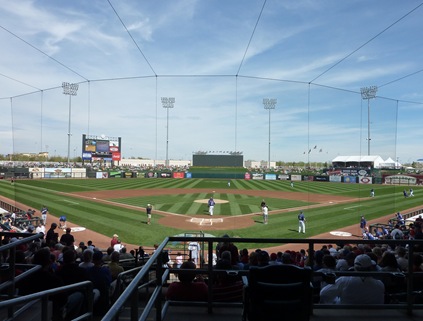 Here’s the view of the stadium from where we were sitting. 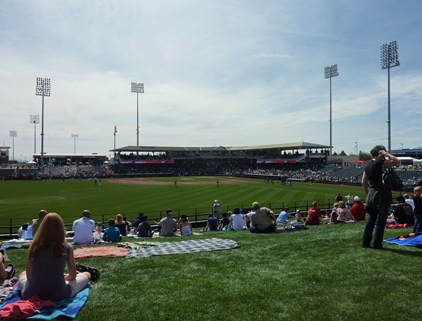 Sometimes during spring training teams will play split squad games which means the team is split in half, and both groups will play a game.  Yesterday the Brewers played split squad games.  Only 3 starters were at the game we were at.  The Rangers were playing their full squad.  They were also in the World Series last year (although they didn’t win), so they’re a good team.  The Brewers lost 8-1.  Oh well, we still had a good time.

On Saturday we went to a Brewers home game at Maryvale.  It was Robin Yount bobble head day.  The first 2,500 fans received a bobble head from last season.  The attendance was almost 6,000, and the Brewers did not disappoint.  They beat the Los Angeles Angels 2-1.

I have to tell you a funny thing I overheard a young woman say.  My family has on occasion accused me of not having common sense.  I always tell them that extremely brilliant people often lack a bit of common sense :)

This young woman must have been extremely brilliant based on her comment.  As she walked by, she said: “It must be Robin Yount day.  That must be why so many people brought their bobble head dolls.”  Obviously, she arrived too late to get one, but come on.  Too funny!

Other than attending games, we’ve been taking it easy.  We road our bikes to the grocery store on Friday and did a little laundry.  I know, tough life :)

Posted by RV Khronicles of Kevelyn at 9:24 AM 2 comments: Links to this post