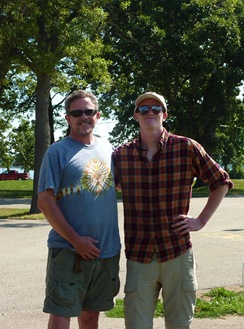 Kevin’s cousin Mark was in town two weekends ago for a wedding. I read his post on Facebook saying he and his son RJ were on their way to Wisconsin, so I invited them to come visit us if they had time. They got here on Sunday evening and pitched their tent on our site. We enjoyed a great visit around the campfire. The next morning we prepared breakfast and then they were on their way to the Apostle Islands and Lake Superior. You may remember we visited Mark and his family when we were in Colorado in September of 2010. It was great seeing them!
This past Saturday Kevin’s brother Joe and his wife Julie came from Iowa to visit us. They arrived Saturday afternoon. We sat outside for a while until some thunderstorms sent us inside. After dinner, the rains stopped and we enjoyed a campfire. They spent the night at a motel in Beaver Dam. We joined them for breakfast Sunday morning, and then they headed home. It was another great visit.
The rain brought some much needed cooler weather. All of last week was still hot and humid with highs every day in the 90s. Yesterday was an absolutely fantastic day. The high temperature was 78 degrees and the humidity was low. I sure hope the heat is over for this summer.
Last night we went to see the Beaver Dam Must-Skis waterski team perform on Beaver Dam Lake. Last week they placed 7th at the state competition and are competing at Nationals next weekend. The announcer told us that they were able to build a pyramid last Thursday during practice that was five levels high. There are only four teams in the country that have done that. They’re hoping to accomplish that stunt at the national competition. Apparently, the water was too rough last night to try it so we saw their normal pyramid. Still very impressive! 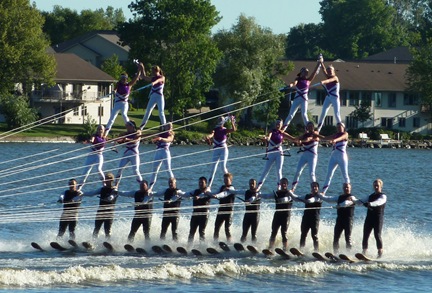 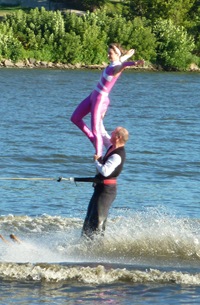 This doubles pair placed third in the state. Quite a few of the acts fell last night. They say that a poor dress rehearsal brings good luck. So, hopefully they’ll do very well at the national competition :)

They had a group of four guys who did jumps off a ramp. Pretty amazing stuff. 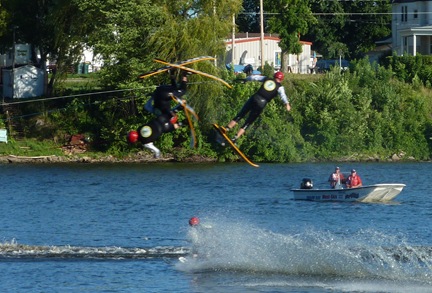 These twenty-two lovely ladies made up the ballet line. 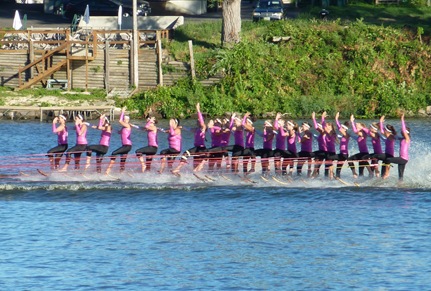 Kevin and I went golfing today. We skipped last week because of the heat. I guess we were a bit rusty because we both had pretty poor scores. Kevin’s drives were awesome, but he struggled with his short game. I started slow, but my last three holes were pretty decent. Oh well, I knew my last round was too good to be true. I guess there’s always next time.
Don’t wish upon a star – Reach for one!
Posted by RV Khronicles of Kevelyn at 5:38 PM 3 comments: