On June 1st I drove to Minnesota to attend a bridal shower for our future daughter-in-law Cathryn. This weekend was Kevin’s turn to party.

This past Saturday was Korey’s bachelor party here in Wisconsin. Three out of the five groomsmen were able to attend. The other two live out of state. The plan was to cookout at Eric’s house in the afternoon. Eric is Korey’s older brother and the best man. Then they went to the Milwaukee Brewer’s baseball game and ended the night at Potawatomi Casino in Milwaukee.

Korey left Omaha right from work Thursday and arrived by us at about 10:30 pm. He spent the night and most of the day Friday with us, which made me very happy.

There were nine guys in attendance at the party including Kevin and my brother Ron. The rest of the guys were friends Korey has known since middle school. Kevin and one of the other guys were designated drivers. Kevin was also chief cook. I sent along potato salad, coleslaw, cowboy beans and dessert bars I had made the week before.

Kevin reported that the weather was good, the food was good, the Brewers won, and everyone had a great time. Lots of stories were told with laughter galore.

Here’s the guys minus my brother who arrived later. Korey received a few gag gifts including the Brewers fist cup holder he’s wearing. 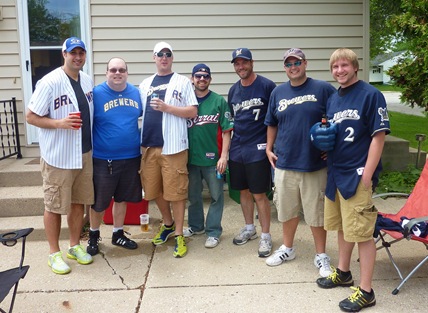 Some fierce games of bean bag toss were played. 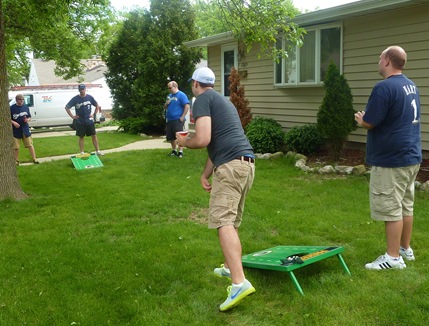 Jeremy and Korey have been friends since middle school and were college roommates. Jeremy lives in Orlando and couldn’t get away to come to the party. No problem, the other guys made sure he was represented, although he doesn’t look very happy. Too funny! 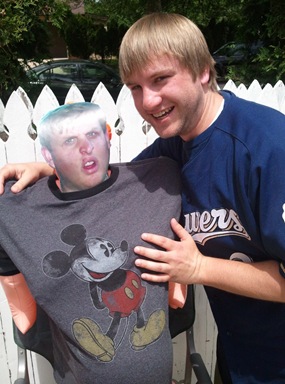 The enclosed shelter at our campground was rented on Saturday for a graduation party and on Sunday for a bridal shower so the park was quite busy all weekend. The weather was finally warm and dry. This week is forecast to be very nice.

Tomorrow is our 36th wedding anniversary. We’re celebrating today by golfing at one of our favorite golf courses. Then tonight Kevin’s grilling some steaks. Tomorrow I have plans with my mom, and Kevin will be mowing all day. We sure feel blessed to have been together so many years. Here’s to many, many more!