First, I’d like to say thank you to those of you who sent us congratulations and well wishes for our fourth anniversary of fulltime RVing. I was especially touched by this comment from Merikay.

“Yes, it is hard to believe that it has been four years since you wrote the post "Dreams do come true." I printed it and had it on my wall for most of that time.”

Thanks for the kind words, Merikay. One of the reasons I write this blog is to share our fulltime RVing stories. When Kevin first told me he wanted to be a fulltimer, I did a lot of research and read many blogs. All of that information helped ease my mind as to what it was that Kevin wanted me to do. It feels great to hear that some of what I’ve shared has impacted someone else in a positive way!

The weather has improved ever so slightly over the past few days. We were actually able to get out and walk our three mile route on both Saturday and Sunday. The sun managed to come out once in a while, although it was rather windy.

All but one of our campsites were occupied for the weekend. People sure do knock on our door for some odd reasons. We got the typical people wanting to buy firewood or asking questions about paying or registering. Then we got the guy who wanted us to identify some tree pods and nuts. Another guy wanted to talk about our truck. Someone wanted to know where to buy propane (understandable in this cold weather). Someone else wanted to let us know the water in the bathroom was running. (It does that for a bit and then shuts off automatically.)

But, the most annoying person was a guy who lives across the road from the park. He knocked quite hard on our door. When Kevin answered, he started yelling at Kevin about someone from this park knocking over his mailbox and how it happens all the time. Turns out this was only the second time in many years. Kevin saw a motorhome that is in the park turning around in the guy’s driveway after missing the entrance to the park, but did not see it hit the mailbox.

The guy had already gone around and knocked on the door of all the campers in the park and accused everyone of hitting his mailbox. Kevin got him to calm down and told him to stop harassing our customers and to call the sheriff if he was that upset. In fact, if he didn’t calm down, we would call the sheriff for him! Well, he did calm down and finally left. The next day we saw him repairing his mailbox.

Yesterday Kevin spotted a large nest in one of the hickory trees in the park. It’s probably about 50 or 60 feet off the ground. I think it might be a Red Tailed Hawk because I can see some red feathers on the bird sitting on the nest. It must be pretty cold sitting up that high when the wind is howling. Glad I’m not a bird! 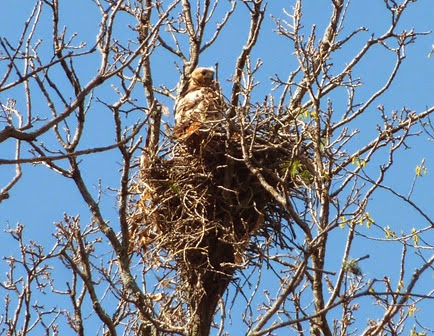 Posted by RV Khronicles of Kevelyn at 9:18 AM 2 comments: Links to this post