We attended the Colorado River Adventure sales presentation yesterday.  They own 8 parks in the Southern California, Arizona area.  Included in the packages was free camping at any of their 8 home parks plus Coast to Coast and RPI membership and some time trading for condos in the more expensive packages.

The park we’re at looked really nice on the video they showed of the 8 parks which makes me wonder how nice the others really are.  They claim they have only owned this park for 7 years, and it is used as a stop-over to the nicer parks.  If they’ve owned this place for 7 years, why haven’t they spent any money fixing the roads and upgrading the electricity to 50 amp?

The prices were between $5,000 and $9,000 plus $429 a year maintenance.  We did a little number crunching and decided it’s not for us.  We don’t want to be tied down to the same places every winter and plan to workkamp in the future to offset our site fees.

I got a kick out of the guy’s comment regarding the interstate traffic noise.  He lives on a site right next to the freeway.  He said after a while the traffic noise sounds like waves.  I’m still laughing at that one.  I’d rather be parked next to the ocean and hear the real waves :)

After dark we took a walk in a nearby subdivision and looked at the Christmas decorations on some of the houses.  I thought it would feel weird seeing outdoor decorations without snow and cold weather, but I enjoyed it just as much as in Wisconsin.  I don’t miss the cold and snow one bit.  The temperatures are predicted to be near 80 the next few days.  We’re loving it! 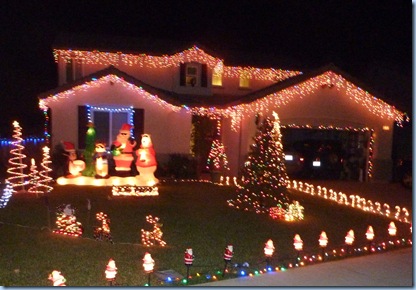 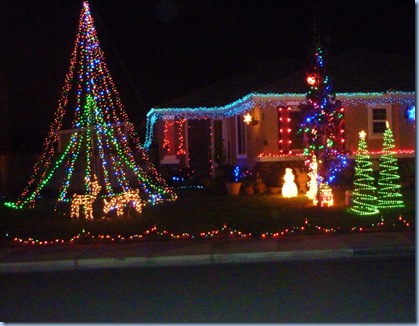