We arrived yesterday afternoon at Frog City RV park in Duson, Louisiana. This is another Passport America park and is a nice place just off I-10 to stop for a couple of nights. We met up with our friends Kim and Harland from Nova Scotia for a few days while we’re here. They’re on their way to Yuma coming from the east. We’re on our way to New Orleans coming from the west. This was a great spot to meet up in between.

We first met Kim and Harland in 2007 on a bus tour of Europe. We hit it off on that trip and have kept in touch via the internet and Facebook. We’ve met up the last two winters in our travels through the south, and always have a great time visiting with them. This time has been no different. Lots of stories and laughter.

Today we visited Rayne, Louisiana, about five miles from our RV park. This small town got its fame from frog legs. In the early 1900s three Parisian brothers operated a profitable export business in Rayne, shipping frog legs all over the country and even to Europe. At the height of the business, they were shipping 10,000 pounds of frog legs a week. That’s a lot of frogs!!

Today the town uses its claim as the frog capital of the world as a tourist attraction. There are frog statues all over town painted to coincide with the business they are in front of. Here’s the frog in front of the bank with Kim and Harland. 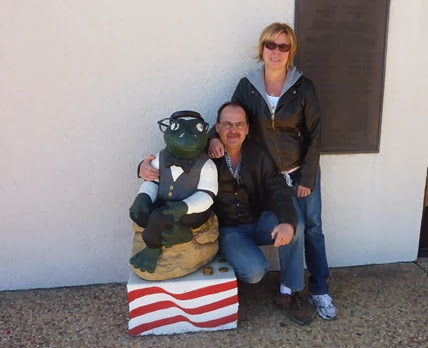 This one was so clever. It was in front of a building supply business, and he had a whole construction site around him with stories to go along with it. 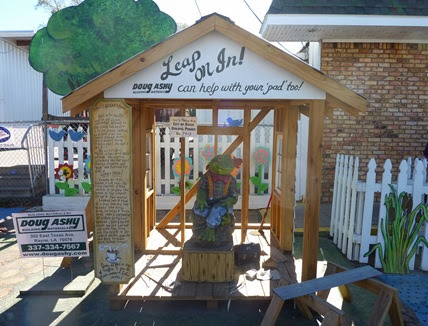 In addition to the frog statues, there are also a number of murals throughout the town. Some of them are really nice, and some of them have seen better days. This one was on the side of a large building and looked great. 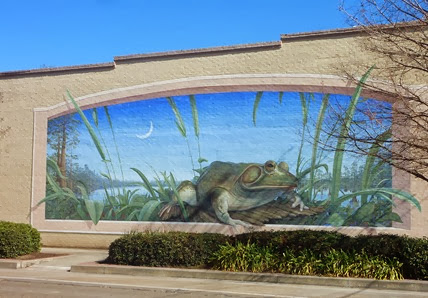 I thought this one was really cute, and I liked the play on words with the town’s name. 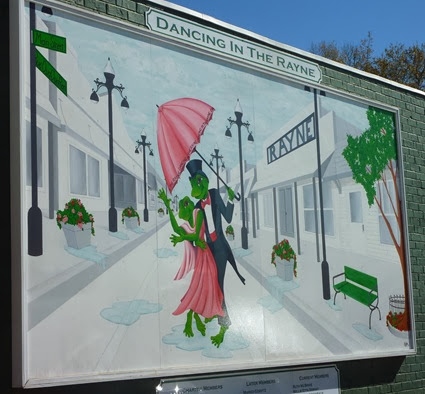 As if the frog theme isn’t enough of a claim to fame, Rayne also has a cemetery that is in Ripley’s Believe it or Not. It seems St. Joseph’s Cemetery is the only cemetery in the Judeo-Christian world facing north-south. 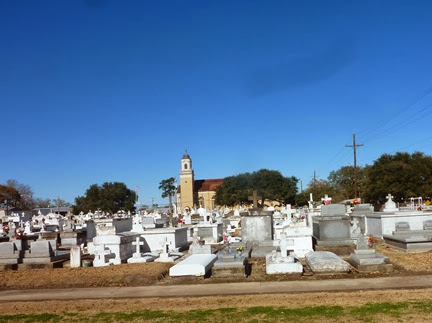 I never realized this, but apparently cemeteries are laid out so the graves face east-west (the east representing the beginning of life and the west the end of life). Legend has it that the creators of the cemetery in Rayne mistakenly started burying people north to south. By the time the error was discovered, too many bodies had been buried so they just kept going.

This was an interesting town to spend an hour or so roaming around on a beautiful, sunny day. Another novel roadside America town to explore.

Posted by RV Khronicles of Kevelyn at 8:59 PM No comments: Links to this post