On Tuesday we explored the Gulf State Park Pier. Upon check-in at the park, we had received a coupon for free admission to the pier. Otherwise, it's $3 per person to visit, and more to fish from the pier. 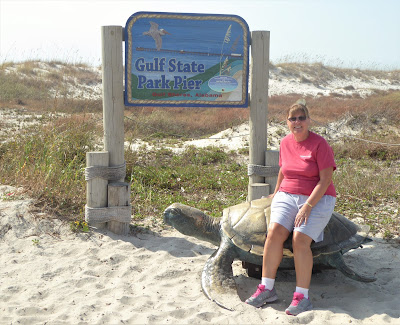 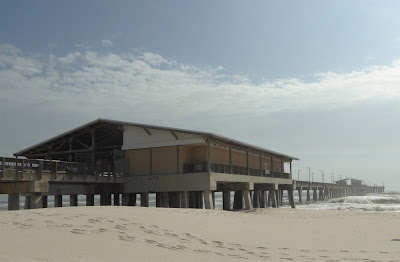 We went on a warm and windy day to see the high surf. The tall buildings are part of Gulf Shores, Alabama. 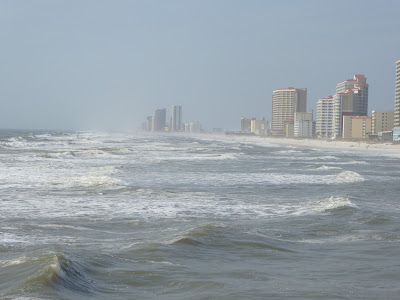 There were several people fishing, and the pelicans were looking for a handout. 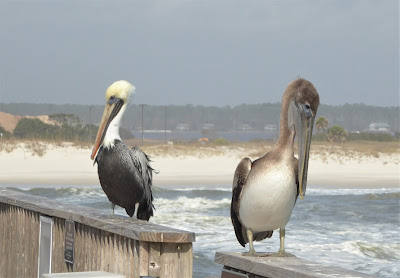 We've been keeping busy walking and bike riding. There are lots of trails to explore in the park. The other day we biked the Cotton Bayou Trail and discovered a cute primitive tenting area. The three tents look like the type you see in Civil War era movies with cots inside. Each has a solar panel in back to provide power for lights inside, a porch with chairs and a fire pit. 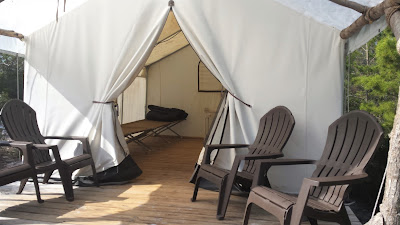 There is a communal wash station with a sink and hand pump. 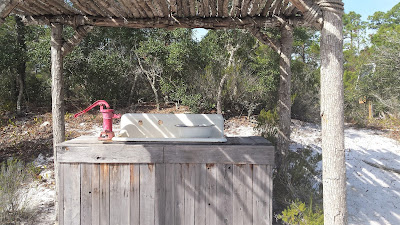 A portable toilet is off to one side and there is an outdoor shower. Inside the shower is another hand pump with instructions to pump 100 times to fill the tank on top. I'm guessing the water is pretty cold. It would probably be smart to fill the tank in the morning, and shower later in the day. It looked like a fun place to camp when the nights are not too cold. You have to hike in 1.5 miles on the trail, and the cost is $50 per night. 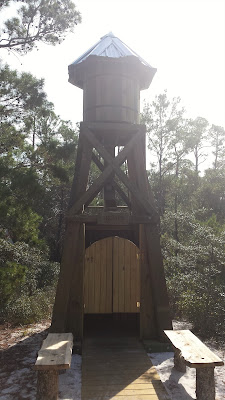 As we were biking along the trail, two large birds flew up in front of us. One of them landed high up in a nearby pine tree. I couldn't believe I was seeing a great blue heron up in the tree. I've never seen one in a tree, and would have guessed they stay on the ground. I've only ever seen them on the beach or in marshes. The picture isn't the best, as I only had my cell phone camera with me. 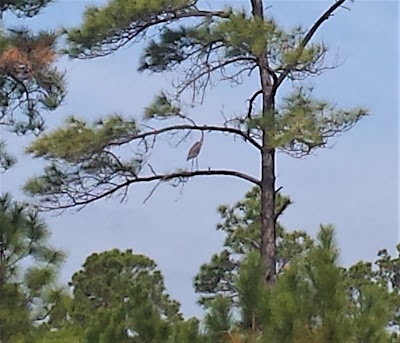 Thanksgiving was pleasant, but quiet. I spoke to my mom and both of our boys, and then enjoyed some beautiful beach time while Kevin watched football. It was near 80 degrees that day. 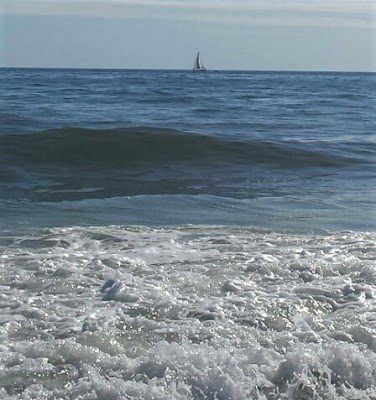 Since then, we've had some much needed rain and it has cooled off a bit.

Last week we also played a round of golf at the course in the state park. It is a nice course, and not too difficult. We're going back tomorrow to play another round.

Today is December 1st, and there has been a steady flow of RVs coming into the park. I think some snowbirds are arriving. We'll be here until the end of the month, but are leaving for about a week to drive back home for Christmas. I'm looking forward to being with family for the holidays this year.

Don’t wish upon a star – Reach for one!
Posted by RV Khronicles of Kevelyn at 12:23 PM No comments: Links to this post