Last Monday we joined the resort's hiking group for a four mile hike in the desert outside of Yuma. We drove several miles along a dirt and gravel road to the ghost town of Dome, Arizona. The town was established in the 1800s when gold mines were in operation in this area. It was also a stop on the Butterfield Coach which ran from St. Louis to San Francisco.

It took about 25 days to do the full trip, 24 hours a day. Horses were switched out every 10 hours at stations along the route. I can't imagine spending 25 solid days and nights in a stagecoach on the bumpy dirt roads. Passengers and the mail were carried on the coaches. The town of Dome existed until about 1940. They even had a post office. There are some old trailers sitting out there. I'm often amazed by the remote places people lived. 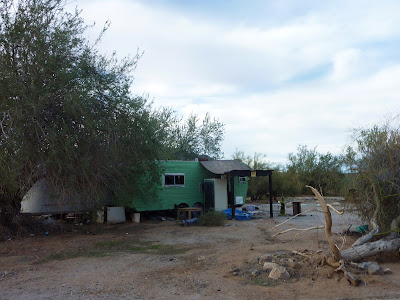 We hiked for about two hours including a stop for some snacks and a rest. Some of the terrain was fairly easy along a path. In other areas, we were scrambling over rocks and picking our way down the sides of hills. At one point, I went down part of the way on my butt because I was afraid I'd slip on the loose stones.

We came to this water hole in the desert. Our leader Everett did not think this was a spring, but rather a deep hole where water accumulates and stays. It was very dirty. We saw some animal tracks around the edges. 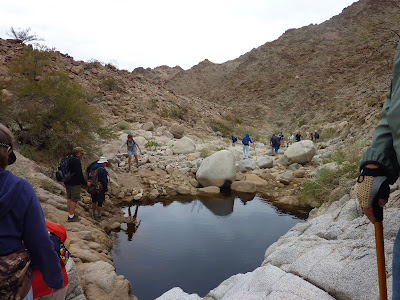 Everett's wife Nancy found this sheep's horn at our lunch stop. Just a small piece was sticking out of the ground. She dug it out, and what an amazing find. We've never seen any animals on our hikes. It's no wonder with 20 to 40 people tramping around. 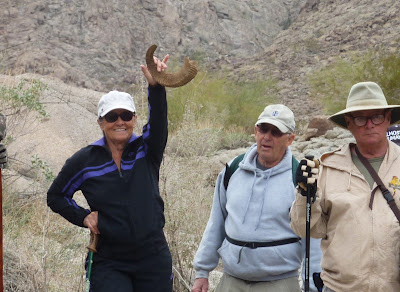 On the way back, we stopped at the Dome cemetery. It looks like these white crosses were put here in recent years to replace older and decaying grave markers. There is a registry of all the people buried here at the city office. Word is that only Mexicans, Indians and other non-whites were buried here. The whites were buried in Yuma. 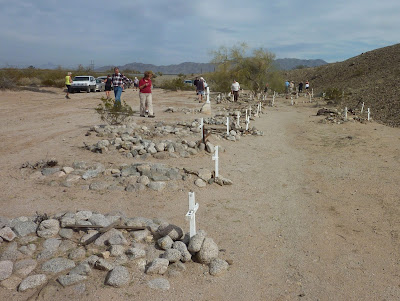 All of the crosses had coins placed on top of them. Some of the coins were very old and weathered, others were quite new and shiny. This is done as a sign of respect. I've never seen that before. As you can see by all the footprints around the cross, there are a lot of people who come by here either hiking or on ATVs. It's refreshing to see that the coins are left alone. 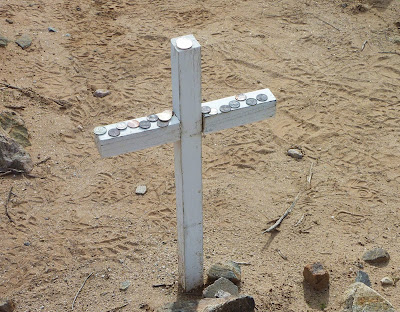 Yesterday we had lunch with Steve and Joan. They are also fulltime RVers, and have been on the road about as long as we have been. We've been reading each others blogs. They are in Yuma for a few days visiting friends, so we made plans to meet in person.

As is always the case with fellow fulltime RVers, we had plenty to talk about. After reading someone's blog for years, you feel like you already know the people and have an instant connection. We enjoyed hearing about their adventures. They have been volunteering at Lake Mead during the winter the last few years. It sounds like a great place. We will definitely plan to get there sometime to check it out and meet up with them again.

Last summer they got a job working for a company that does back road mapping for the BLM. They spent all summer driving along the back roads in Idaho, Wyoming, and some neighboring states checking the roads in their Jeep. Sounds like a great job if you enjoy Jeeping and exploring. 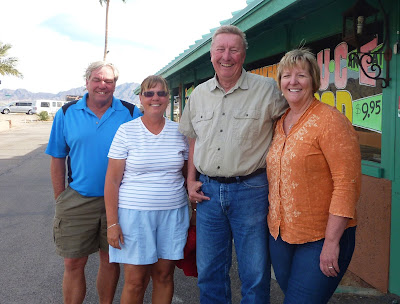 Tomorrow we're heading to Quartzite for the day. In the morning, we'll check out the RV show tents. In the afternoon we're attending the 2nd Annual Bloggerfest. It's a gathering for bloggers to get together and meet in person. We know of a few people that will be there whom we have already met, and I'm looking forward to meeting new to us bloggers as well. Should be a great time.

We've been golfing at least once a week since we've been in Yuma. I am happy to say that my game is improving a bit. I'll never be great, but at least there is a bit of improvement. Keeps me coming back.

Don’t wish upon a star – Reach for one!
Posted by RV Khronicles of Kevelyn at 9:50 AM 1 comment: Links to this post