Way Down Upon The Suwannee River

On Friday we drove to the Lower Suwannee River National Wildlife Refuge near Cedar Key. It covers 53,000 acres and was established in 1979 to protect one of the largest river-delta estuarine systems in the United States. The historic Suwannee River passes through the refuge on its way to the Gulf of Mexico.

We've all heard the famous song by Stephen Foster about this river. In fact, it's the official Florida state song. I always thought of Georgia when I heard the song. However, it is the second longest river in Florida flowing for 265 miles to the Gulf. The start of the river is in the Okefenokee Wildlife Refuge in Georgia which we will be visiting today.

We hiked the River Trail over some boardwalks to the river. The refuge is home to 232 species of birds, 72 species of reptiles and 42 species of mammals. We didn't see any of them :) 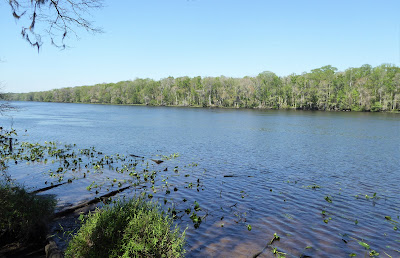 Our next stop was Shell Mound Park. This is an archaeological site. Thousands of years ago Native Americans lived here and built up this mound with shells, animal bones and other refuse. The elevation helped them take advantage of breezes off the water. Now it just looks like a hill covered in trees. While we were walking on the trail to the fishing pier, we did see lots of oyster shells on the ground. 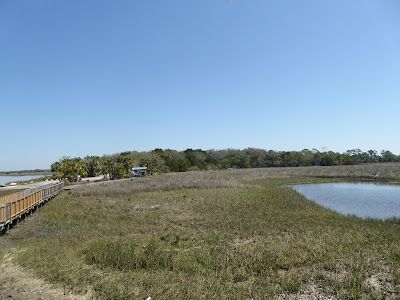 We met an interesting local man on the fishing pier. He told us that the shells we were seeing in the Cedar Key area on the little mounds in the water are oyster shells. Lots of the ones above water are dried out, but he explained how to cook them if we found some fresh ones. I think we'll pass. We love lots of different kinds of seafood, but oysters if not one of our favorites.

We spent the rest of the weekend relaxing at the RV park, even playing a little pickle ball. This was the first park we've been at all winter that had a court. The weather has gotten warmer again and is fantastic. The only downside has been that Kevin is getting bitten while outside. We think they are sand fleas. It happens mostly when he is setting up or taking down and is on the grass. His arms and legs are full of red spots. Benadryl anti-itch cream, ibuprofen and bug spray are helping. He says they itch a lot.

Monday we left Cedar Key and headed to Callahan, Florida, about 20 miles north of Jacksonville. We're staying here for three nights so we can visit the Okefenokee Swamp in Georgia and Jacksonville.

Don’t wish upon a star – Reach for one!
Posted by RV Khronicles of Kevelyn at 6:52 AM 2 comments: Links to this post