We were planning to go back to Mt. Rainier on our last day in Seattle, however that didn't work out. We found out the visitor center closest to the top of the mountain was only open on weekends during April and the weatherman said it was snowing in the mountains. Instead we went to the Seattle Center and visited the Sci-Fi and Music Museum. My guys are into both science fiction and music so we thought we would check it out. I'm not really that much of a fan. They enjoyed it. I thought it was OK. There was this amazing sculpture made out of musical instruments and it was wired so that some of them even played. That's Eric listening to the music it makes on headphones. They also had an area where you could try out instruments. A computer walked you through how to play. I tried the drums and guitar. My rhythm was not very good on the drums. Our son Korey played percussion all through middle and high school and showed me how it is done. After trying it, I have a new found respect for his talent. I also tried the guitar. I did a bit better and was able to play along to Louie Louie. How about that! 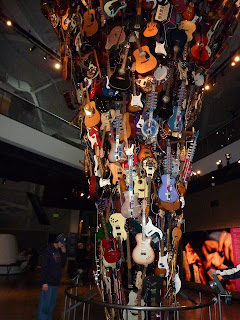 After the museum we drove to Alki Beach. It is on the northwest side of Seattle. It was a beautiful beach with a great view of the Seattle skyline and the Olympic Mountains. The mountains were pretty cloud covered, but here's a view of the skyline. 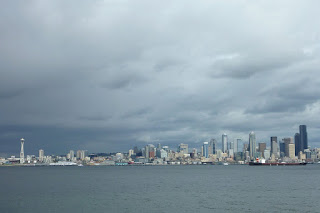 We got back on Wednesday night. Good thing since we had a layover in Denver and later that evening they had the security issue on a plane flying into Denver. You probably heard about the diplomat smoking in the bathroom. What a dope!!! Today I heard that a plane at Seattle's airport hit a tanker truck yesterday. Thank goodness we made it home safe and sound!
Today was showing #37 of the house and tomorrow are showings 38 and 39. Still keeping my fingers crossed and praying this will be over soon so we can get on with the dream.
I came across an interesting saying from the Lakota Indians:
Man's heart, away from nature, becomes hard; the Lakota knew that lack of respect for growing, living things soon led to a lack of respect for humans, too.
Posted by RV Khronicles of Kevelyn at 2:08 PM 1 comment: Links to this post