Our boys are finally here safe and sound!!!

On Wednesday morning Kevin went down to the office and found out that the entrance road to the campground was flooded and closed.  There was no other way out.  We could not even walk (or swim) out at that point.  It was just too dangerous.

I was quite upset.  It’s a horrible feeling being trapped.  At least our camper was never at any risk and we had power.  If I wasn’t in such a panic to pick up the boys, it wouldn’t have been such a big deal.

The campground employees could not give us any definite answers.  A contractor was coming, but no one knew anything more than that.

I started scrambling and calling around for a rental car in case we could walk out.  Of course, with the holidays and the weather everyone was booked.  Enterprise could get us a car, but couldn’t send anyone to pick us up.

At 1:00 p.m. Kevin and I walked back down to the entrance.  The contractors were working on the road, and there was a possibility they would have it open to drive on by night, but no promises.  We could now at least walk across it dodging holes, running water and MUD. 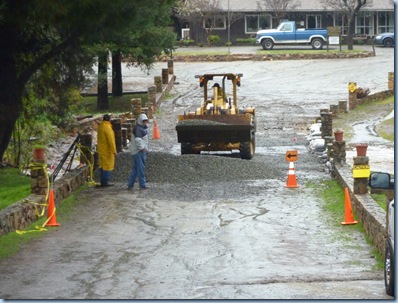 It doesn’t look that bad in the picture.  A few hours earlier, the water was completely over the posts along both sides of the road.

I wasn’t willing to take the chance and wait to see if we could drive out so I found a cab driver willing to pick us up at the main road and drive us to Enterprise to rent a car.

We ended up getting to the airport at about 4:30 p.m.  We had heard there were all kinds of roads flooded in San Diego so as soon as we got the rental car, we drove to the airport right away.  We actually had no problems getting there so ended up sitting at the airport for several hours. 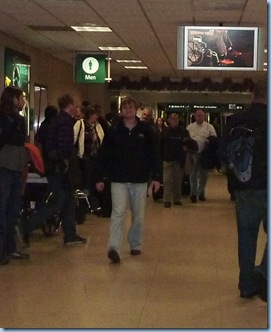 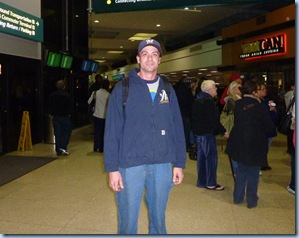 Eric was delayed at his layover in Vegas for two hours because of the rain.  He finally arrived a little after 10:00 p.m.

I can’t tell you how happy and relieved I was to finally have them both here safe and sound!!!

So because of the crazy record December rainfall in California, here’s how it played out:

Having our boys safe and sound with us for Christmas – PRICELESS!!!

We spent the entire day at Disneyland yesterday and had a great time despite the crowds.  I’ll post some pictures tomorrow.

Merry Christmas Eve to everyone.  Thanks for the positive messages you’ve sent us the last few days!  Today we relax and enjoy some precious family time :)

Posted by RV Khronicles of Kevelyn at 1:44 PM 5 comments: Links to this post