On Wednesday we drove about 20  miles to the Alamosa Wildlife Refuge.  Literature I read said that the visitor center was open through November and that Sand Hill Cranes came to the refuge in March and October.

We were disappointed to find that the visitor center was closed, and there was not a crane in sight.  In fact, we saw very little wildlife of any kind.

We did see something amazing, though.  There was a 2.5 mile auto tour through the refuge.  I saw a large bird fly up from a canal along the side of the road with something long dangling from its claws.  The bird landed in a field quite a distance from us.  We got out the binoculars and saw what we thought was an owl eating a snake.  I zoomed in my camera and took a picture.  After cropping the picture further, it’s definitely an owl.  This is the first time we’ve seen an owl in the wild! 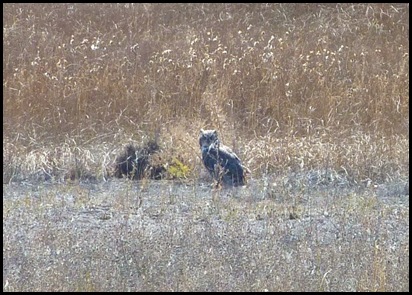 We also discovered that the Rio Grande River runs through the refuge; the very same river that is the border between the US and Mexico.  It’s headwaters are actually in the San Juan Mountains in Colorado.  Here’s a picture of the river with the headwater mountains way off in the distance. 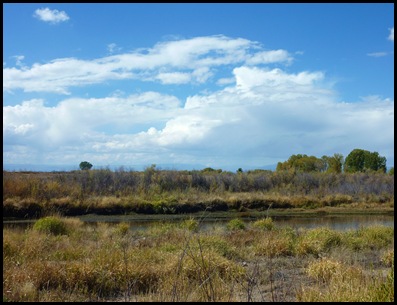 The auto tour had several signs along the route.  Even though we saw very few birds, we know there must be many that hang out in the refuge because the signs were covered with bird doo-doo.  So much of it that it was hard to read some of the signs.  Maybe they should get some volunteer workampers to clean the signs.  What do you think, Judy?

One of the mountains that dominates this area is called Mount Blanca.  It is the fourth highest mountain in the state.  It frequently has its head in the clouds.  I was able to get pictures with its head in and out of the clouds :) 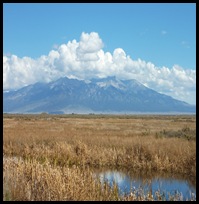 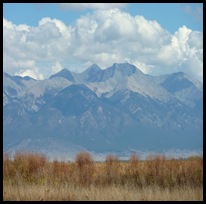 Colorado has 54 mountains peaks that are over 14,000 feet tall.  That’s more than any other state in the US.  The mountains we’ve seen are truly spectacular!

Another thing we’ve noticed is how people plop their homes in the middle of nowhere.  Frequently, there is a house or mobile home out on the range without any sign of how they even get to it.  I thought this one was particularly interesting.  It’s a trailer with 3 railroad cars behind it.  You can only see the first railroad car, but there are 2 more lined up behind the front one.  We’ve actually seen several homes with railroad cars in the yard.  Maybe they’re cheap storage.  Along with the homes on the range, there are also many homes perched up on top of hills and mountains.  Again, often we can’t figure out how they even get up there.  It’s amazing where people choose to live. 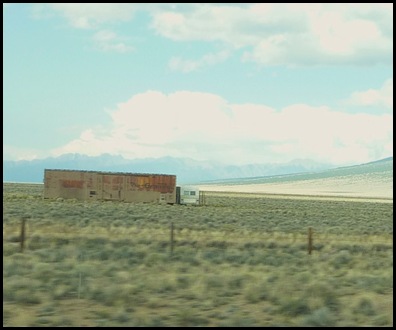 Today we’re staying home.  Time to do some laundry and cleaning :)

Posted by RV Khronicles of Kevelyn at 10:18 AM 2 comments: Links to this post