On Monday we traveled from Port Aransas to Hidden Valley RV Park in Von Ormy, just south of San Antonio. I am always so grateful when we have an uneventful travel day.

The campground is just okay. The cost is $170 a week. There is no bath house. They do have an old mobile home they call a clubhouse which has a bathroom with a shower campers can use. We have a FHU 50 amp site with adequate free wi-fi. We chose this place solely for its close location to San Antonio.

Tuesday was very windy again, so we stayed put. Yesterday we headed to downtown San Antonio. Our plan was to go to the Alamo and wander around the River Walk. There has been a special exhibit at the Alamo for the last month called the Travis Letter. Yesterday was the last day before the letter goes back to the archives in Austin.

The Alamo was packed with people. The line to see this letter was hours long. No thanks. I’m sure the history of this letter is significant to Texans, but no way were we dealing with those crowds. We’ll go back to the Alamo on Friday. 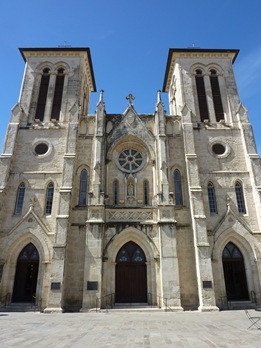 We walked to the Mexican Market and browsed through the shops there. Prices were quite a bit higher than in Mexico. A large bottle of vanilla was $2 in Mexico and $10 here. Glad we bought some while in Mexico in January. Then we headed to the River Walk. Along the way we passed San Fernando Cathedral, built in 1750. It is the oldest cathedral sanctuary in the United States. 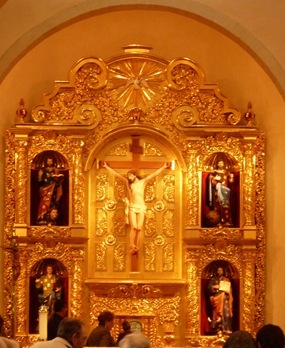 The alter is very ornate and beautiful.

An interesting fact about this cathedral is that three of the heroes from the Alamo are interred inside the left door of the cathedral. Travis, Crockett and Bowie were laid to rest here in 1938. 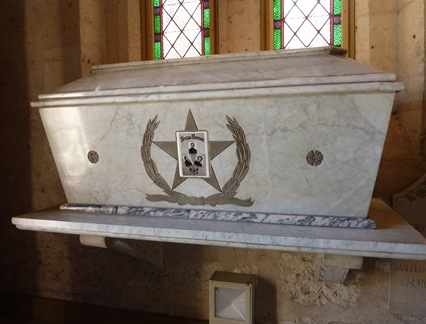 We were in San Antonio about 10 years ago for a long weekend. Since that time the River Walk has been expanded both north and south of the main downtown area. These expanded areas are not crowded with shops and restaurants. Yesterday we walked about 3 miles along the north section. It was a gorgeous day to enjoy the scenic, beautifully landscaped path. Many flowers are blooming along the way. I think this was some type of lilac bush. It sure was pretty. 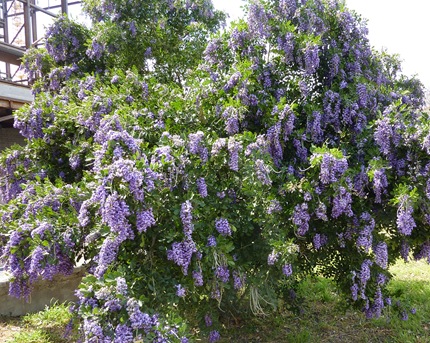 Some of the bridges have had works of art added to them. The ones we saw were mainly for night viewing, needing lights to show them off. There are also several murals along the side walls, as well as waterfalls and fountains. 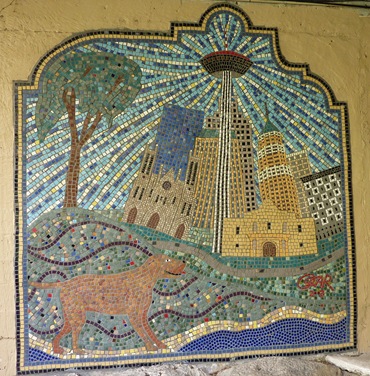 This bench looked like wood, but it was actually made out of cement. There are plenty of benches along the river. 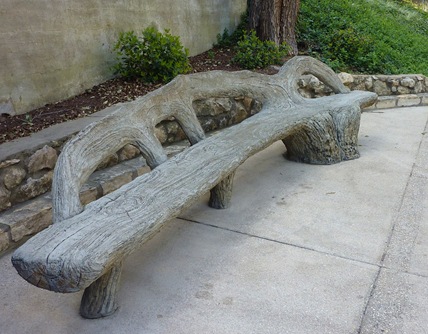 After walking about five or six miles, we ended up at the main tourist part of the river. We had margaritas and a nacho appetizer at one of the Mexican restaurants. Total bill $23. Its not cheap to eat at these places along the river, but we had an outside table and enjoyed this little treat. There were quite a few Mallard ducks and pigeons hanging out. This mama duck had lots of babies to keep track of. 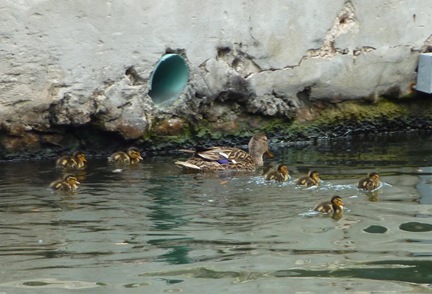 There are tour boats that will take you along the river. We did this last time we were here. It’s a fun activity. 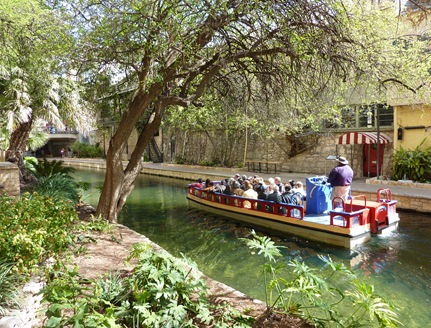 We met our friends Rodney and Debbie for dinner. We had met them while working at Amazon. They suggested meeting at Rudy’s BBQ. This was our first experience with Texas BBQ. You stand in line, cafeteria style and order your meat and sides. We ordered a full rack of baby-back ribs, 1/4 lb. brisket, 1/4 lb. turkey and one sausage as well as beans, cole slaw and potato salad for the two of us. All of this plus a beer and soda for just over $20. The brisket was a little tough. The turkey was excellent and the ribs were good, too. I’m not a big sausage fan, but Kevin said it was good.

We spent a few hours catching up with Rodney and Debbie. Thanks for introducing us to Texas BBQ. It was great seeing you guys again. We all plan to be back at Amazon this fall, probably working the same shifts again.

Posted by RV Khronicles of Kevelyn at 9:46 AM 5 comments: Links to this post