This weekend we visited our good friends, Dick and Wanda, who live in Bella Vista, Arkansas.  They used to live in Wisconsin, and we met them about fifteen years ago when they joined the camping club we belonged to.

Several years ago they sold their home in Wisconsin and spent a year traveling in their motorhome. They found they really liked the Bella Vista area and bought a condo.

Bella Vista is a little over two hours from Coffeyville so we left Saturday early afternoon and came back last night. On Saturday afternoon they took us to Bentonville, Arkansas which is the headquarters of the Wal-Mart Corporation. 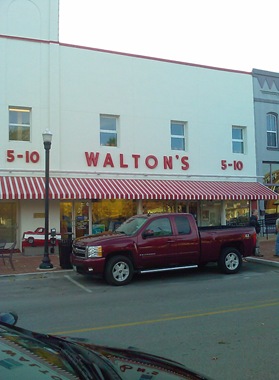 There is a Wal-Mart museum in downtown Bentonville located in the first Walton’s five and dime store which opened in 1950. Unfortunately, I forgot my camera so I only have a few pictures taken on my phone.

It was very interesting to learn about Sam Walton and how he and his brother built the Wal-Mart empire. I know there are a lot of Wal-Mart haters out there, but I must say I got the impression he was a nice guy, with good values and an excellent business sense. Since he opened his first Walton’s store in 1950, Wal-Mart has grown to 8,700 stores worldwide with gross sales of $450 billion in 2010.

Our next stop was the Crystal Bridges Art Museum building site. The museum is set to open on November 11. Alice Walton, daughter of Sam Walton, had the idea to built a museum of American art in Bentonville. The Wal-Mart Foundation has donated $1.2 billion to make her dream become a reality. It’s really quite something and will made Bentonville a destination for many tourists and art lovers.  I read that part of the donation was to ensure admission to the museum will be free.

There is a trail through a beautifully landscaped public garden to get to the viewing deck to see the museum. It’s a very impressive complex with two ponds formed by the Crystal Springs. Barbara Bush was there on Saturday for some type of special function prior to the opening of the museum. There was a police officer stationed at the viewing deck. 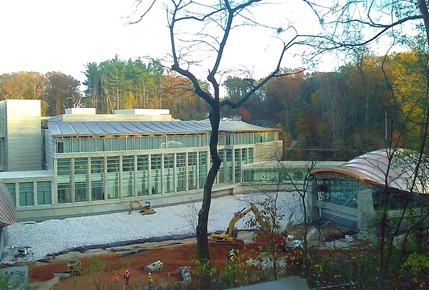 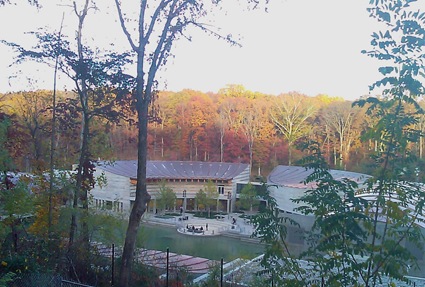 The fall colors were spectacular in Bella Vista. What a beautiful part of the country.

Saturday night we all felt a shaking sensation. Turns out there was an earthquake in Oklahoma, and we felt it in Arkansas. I’ll be interested to hear what people around here have to say about it.

On Sunday we played 18 holes of golf with Dick and Wanda. They belong to a couple of golf leagues so we were part of their outing. Kevin won $9 for the lowest net score. The skies were cloudy, but temps were in the 60s, so we had a pleasant day and a great time golfing with good friends.

After golf we went to a local pizza place, enjoyed some delicious pizza and watched the Packers beat the Chargers. We had no idea how many Packer fans there are in Arkansas.

Thanks Dick and Wanda for inviting us to visit. We had a terrific time!!