A Fun Day With Friends

This weekend was the May outing for the Milwaukee Jaybirds Camping Club that we have belonged to since 1981.  Since we are camphosting this summer, we can’t leave for an entire weekend to camp with the club. But, we can visit for the day if they’re close enough to us.

This month they were near Madison which is only about 40 minutes away.  We had 8 sites occupied in our park for the weekend.  We informed everyone on Friday that we would be gone all day Saturday. If they wanted to buy firewood, they would have to buy it Friday night.  No problem, everyone cooperated.

So, we were able to spend the day with good friends.  In the morning a group of the ladies went to the Madison Farmer’s Market.  It’s held every Saturday from spring through fall on the four blocks surrounding the State Capitol.  It’s really a nice event and has been crowded both times I’ve been there.

At this time of year, there were many flower and plant vendors along with the usual items including bakery products, cheeses and organic vegetables.  There were so many beautiful flowers for sale, but the prices were a bit high for my liking.  However, many other people were buying.  The Capitol has some beautiful flower beds on display. 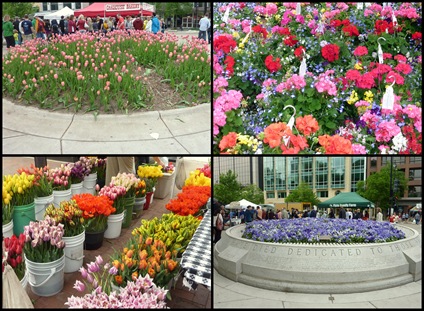 My big purchases were a delicious Bismarck doughnut and a cookie :)  One of the bakeries was selling cookies shaped like cows; very fitting for Wisconsin. Our license plates say “America’s Dairyland”. 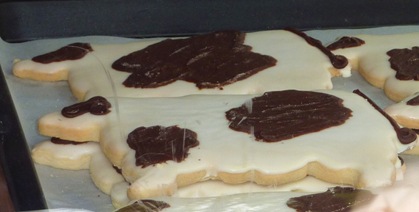 The weather forecast had been for scattered rain throughout the day.  The morning was cloudy, but we managed to see all of the Farmer’s Market without getting rained on.  When we got back to the campground, it rained for a few hours.  By mid-afternoon, the rain stopped and the sun actually made an appearance.

We had a fun cocktail hour and a delicious potluck supper with the group. There were lots of jokes about the world coming to an end while we were eating supper.  Luckily, no earth-shattering events occurred, so we took a walk and enjoyed spending time visiting with everyone.  We played a new game called Qwirkle.  It was an easy, but fun game.

We got home around 9:30 pm.  The campground was nice and quiet. Our clocks were flashing, so power must have gone out at some point during the day.  That’s the second time we’ve had a power outage since we’ve been here.  I’m going to ask if that’s typical.  We’ve been debating whether we should buy a generator.  If this campground keeps losing power, we may be buying that generator sooner than later.

There is a line of trees at the border of our park with beautiful blooms.  We think they are some type of fruit trees, possibly wild plums.  Maybe, we’ll be enjoying some delicious fruit in August and September. 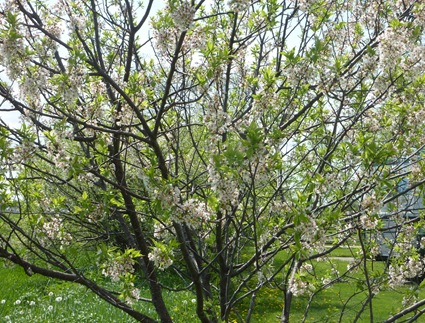 Today is sunny with highs predicted to be around 80 degrees. I think we’ll be going for a bike ride.

Posted by RV Khronicles of Kevelyn at 9:20 AM 6 comments: Links to this post