On Monday night at work we were told our shift would have a mandatory day off on Tuesday. That’s the fourth time we’ve had mandatory time off for a total of 31.5 hours lost.

Yesterday Amazon had their Holiday Kick-Off event. They paid everyone an extra hour if they wanted to attend so we walked over. Coffeyville Community College had their drum line there to perform. They did a good job, although I was expecting more members. Our son Korey was a percussionist in high school so I’m very familiar with drum lines. This group only had 9 members, with 3 snares, a quad, four different sized bass drums, and 1 cymbal.

The general manager of the plant talked about the decline in business this year. He told us that orders are down 20% from last year at this facility. That’s been very obvious to us. He also said that overall Amazon is up 29% this year. I’m not sure if that’s business or profits or what. Apparently, they will be rerouting some orders to this fulfillment center to even things out. He  picked names, and they gave out fourteen $100 gift cards to employees. We didn’t win :(  We did get some candy the managers were passing out.

I feel bad for the people who work here year round. I’m sure having hours cut is a hardship for many of them. There is also resentment by some against the work campers. They are wondering why new employees are being hired when there isn’t enough work for the regular Amazonians. Once the Christmas rush starts, there will be plenty of work. I’m sure it’s difficult to get enough people hired and trained in time for the rush, and have to deal with all of those employees in the weeks before Black Friday.

We will definitely not be earning as much as last year, but we’ll be fine. My pension starting this year has been a big help. We try to earn enough to cover our expenses so we don’t have to dip into our savings. That’s our choice, though. We will be just fine.

I’m sure after next week, I’ll be complaining plenty about sore feet and being exhausted :)

Not much new on the wedding front. Cathryn is in the Doctorate of Occupational Therapy Program at Creighton University in Omaha. She is from Moorhead, Minnesota and that’s where Korey currently lives. The wedding will be in Moorhead. While Cathryn is home for Thanksgiving, they will be shopping for a reception venue. I’m sure we’ll know much more after next week. 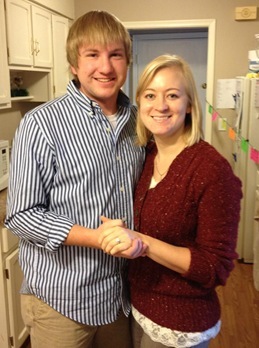 Here’s a picture of the happy couple on their engagement day. See the post-it notes on a string. That was part of the proposal. Korey has asked his brother Eric to be his best man. I’m looking forward to seeing all of my guys in suits. They’ll be so handsome! I know Eric will be taking his job of hosting a bachelor party very seriously!