We are leaving next Monday for a ten day trip to Costa Rica. Many people we've talked to have told us what a fantastic place it is to visit, so we decided that we needed to check it out. After Kevin's cancer scare last summer, it seemed like a good time to plan a trip and enjoy ourselves. I'm sure I'll have plenty of stories and pictures to share when we get back.

Life at the RV resort continues to be busy and full for us. At the end of January, we participated in a 5K walk to raise money for Amberly's Place in Yuma, a women's shelter. Over one hundred people did the walk, some even running. At the end, the resort treated us to snacks and beverages. We also received a long sleeved participation t-shirt. As luck would have it, temps were in the 80s that day, but we powered through. We're in this group somewhere. 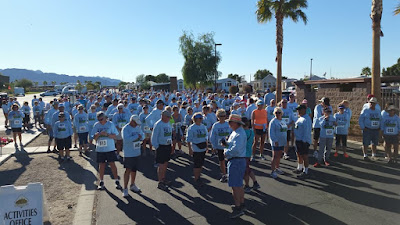 In February, the resort hosted its first ever Murder Mystery dinner. Attendance was limited to 100 people, so I was in line at 9 am the first day tickets were available. I was able to get us two tickets, but they sold out within an hour. Each table was given clues and six cast members came to our table for us to ask questions. At the end, each table of ten gave their idea of who was the murderer. Our table didn't get it right, but we were close. It was a lot of fun. I'm sure they'll be doing it again in the future.

Here's the cast of characters, a combination of staff and residents. Our friend Myra is the blond in the back row. And Elvis in the front row is actually Krista from the home sales office who handled the sale and purchase of our new home. 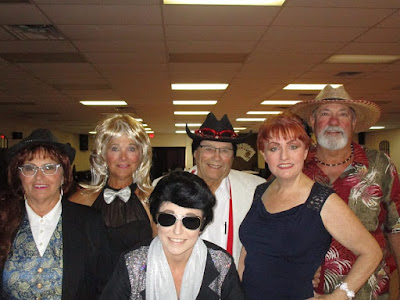 Here's our table of "detectives". 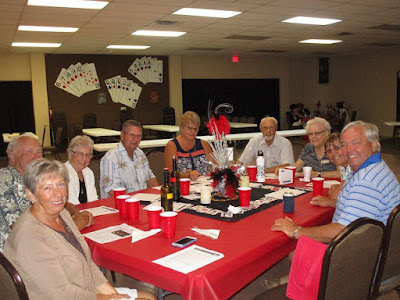 Last Sunday was the fourth annual Fortuna de Oro golf scramble. There are two person coed teams assigned at random. My partner was Bruce, the taller guy in the picture. I had never met him before, but by the time we were done playing, we were friends. The other team in our foursome were Jan and Doug, both of whom I have played with before. In fact, Jan is our next door neighbor at our new home. 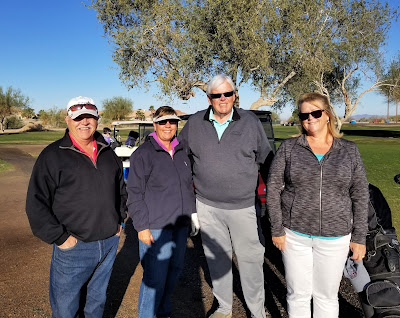 It started out rather cold in the morning with temps around 40. But, as is usually the case in Yuma, the sun was shining and it warmed up quickly. It was a nine hole round. At five of the holes, you picked a card out of a bag to make a poker hand. Our teams weren't very lucky in the poker run. There was also a longest drive for men and women prize. On hole seven, the men had to use an 18 inch driver. The women had a driver twice the normal length. That was certainly a challenge. It was fun to watch how people handled those clubs.

After the golf, we went to the saloon for a tasty lunch and prizes. It was a lot of fun. Kevin also had a partner he had not met before. Over two hundred people participated in this event. There were morning and afternoon groups. We both played in the morning.

We also participated in a group bike ride hosted by the resort. About 50 people drove their bikes to the Old Town Yuma area where we parked and unloaded the bikes. There are very nice paved bike paths that go for miles. We rode for almost two hours and ended at a park where lunch was supposed to be served. Unfortunately, the winds that day were 20 to 30 miles per hour, with gusts up to 40. Somehow, the wind was in our faces in both directions. It was quite a challenge, but we made it without getting blown over. At the park, it was decided everyone would load up their bikes, and we'd meet at the hall at the resort for the lunch. That was a great idea. We enjoyed another tasty lunch. This event was free. I didn't get any pictures.

Last Monday was the last hike of the season for the hiking group. They don't go any later into the year because it starts to get warmer, and there is concern about snakes being out in the desert. We did a relatively easy hike from the resort to the base of the foothills and back. Here's the group for our last hike. The small white dots in the very back are the RVs at the resort. 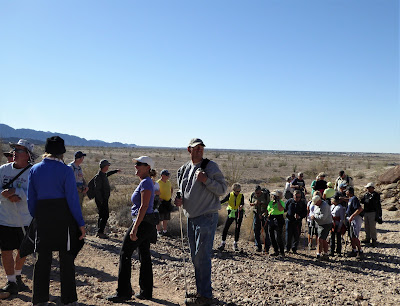 The ocotillo bushes are starting to bloom. They get long red flowers at the end of the branches. The common nickname for them is the lipstick plant. 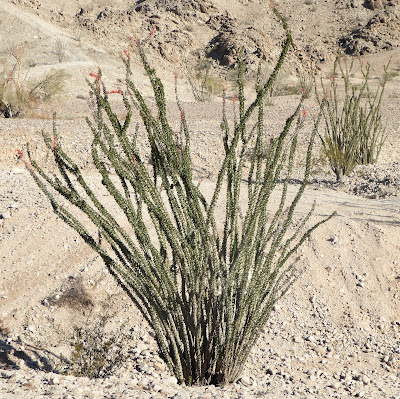 After the hike, the resort provided a free lunch for our group. One of the many things we like about the resort is the many activities available, and the many ways they give back to the customers with things like these lunches.

Today we will be attending the farewell dinner for the quilting group. The resort is providing the fried chicken, and everyone else is bringing a dish to pass. Many of the going away activities begin at the end of February or early March, as many snowbirds leave by the end of March.

We'll be off the grid for the next few weeks. I'm not sure how good internet will be in Costa Rica, so I'll see you when we get back.

Don’t wish upon a star – Reach for one!
Posted by RV Khronicles of Kevelyn at 9:49 AM 3 comments:

We Have a New Home

For those of you who have been waiting on pins and needles for the big announcement, I can now share that we have purchased a park model at Fortuna de Oro RV Resort in Yuma, Arizona. This is the third winter that we have stayed at this resort. We really like it for many reasons. It has a golf course, which many places don't have. There are also so many activities that you could make yourself crazy if you tried to do them all. The people are really nice, and it just feels like home.

The park model we purchased is on the golf course near the back of the resort. Most of the surrounding area is all park models, which makes it much quieter than the RV area in another part of the park. There is no one behind us, as we are on the golf course with a fantastic view. It is about 25 years old, but has been maintained very well. It comes fully furnished, so we don't have to buy new stuff right away. Of course, being that old, some items are dated. But, we will have time to decorate to our liking over the next few years.

Here's a picture of the front. It has a nice front porch to enjoy the shade on hot days. The post next to the steps will be removed, and we hope to plant an orange tree in the front. Also, we will change the paint color to more natural tones, but not for a few years, as it was just painted about three years ago. 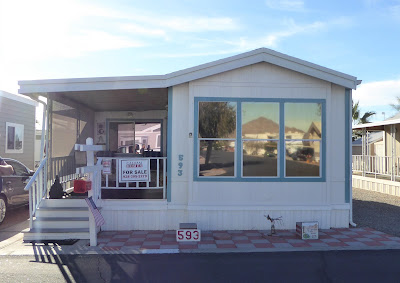 We plan to remove the outdoor carpeting on the porch, and replace it with tile flooring. 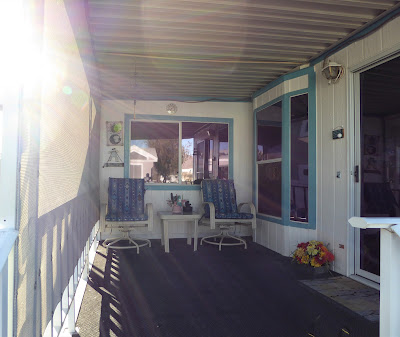 The main reason we chose to buy this unit was for the backyard and the view of the golf course. I love being able to see green grass and palm trees. There is a covered patio and a shed in the back. 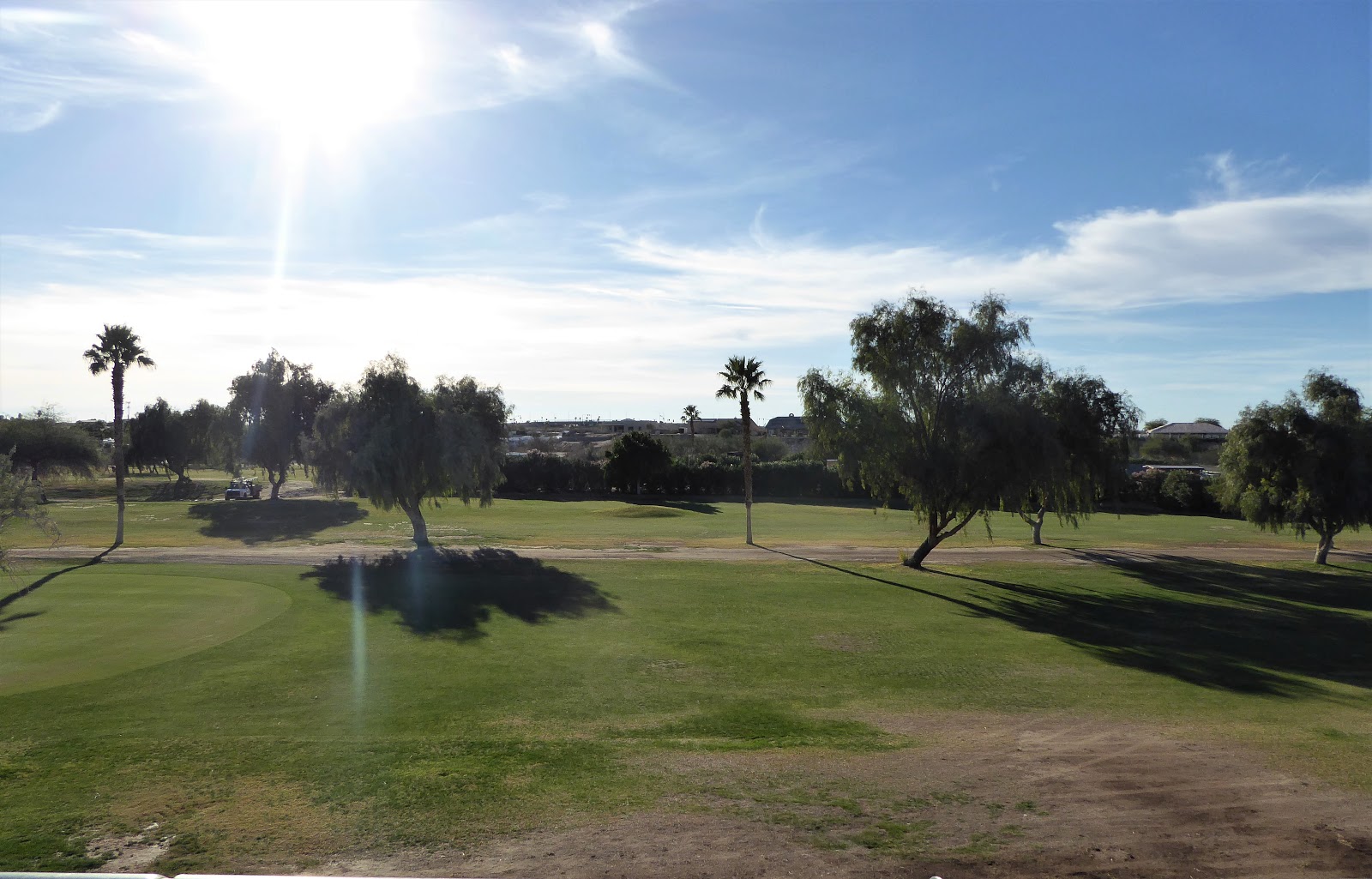 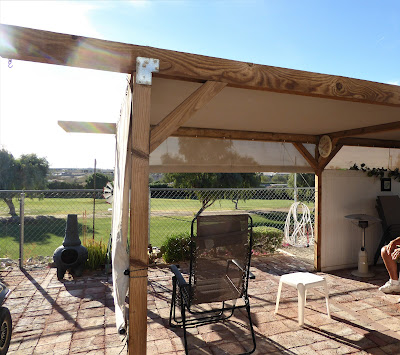 It even comes with a golf cart. 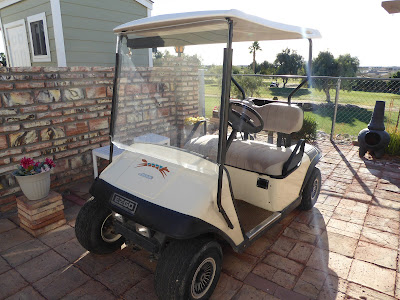 The inside needs some updating. We plan to paint the walls and cabinets and update light fixtures. It has a living room and an added Arizona room which is like a family room. Here's the living room and kitchen. I didn't get a picture of the other rooms yet. 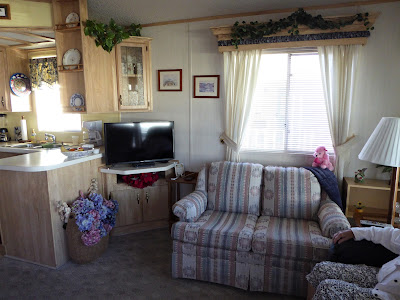 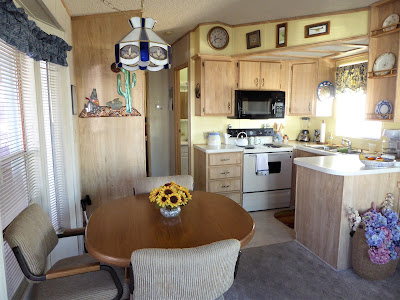 We also plan to replace all the flooring with wood laminate. As you can see, it needs some updating. Overall, the bones are good, but I can't wait to get in there and make it our own. The previous owners are a very elderly couple who need to sell for health reasons. We agreed to let them stay until the end of March, as it is a sad time for them to have to leave. We will have possession for a week before we leave. That will give us time to get a new mattress delivered, do a few minor repairs and close it up for the summer. Next year will really be the first time we can live in it for the winter.

Our plan is to spend anywhere from 6 to 7 months in Arizona and travel in our fifth wheel in the summers. We'll see how hot it gets!!  We've been on the road full time for almost 8 wonderful years. I was missing a sense of home and community, though. This place has that feel. We've joined some golf groups this year, I've been more active in the quilting group, and we've been playing bocce ball with some people. We've made a lot of friends, and it just feels right.

Last Wednesday morning was a trifecta of a full, super, blood moon with an eclipse of the moon in the morning. Here's a shot of the blood moon with the eclipse just starting around 6:30 am that morning. 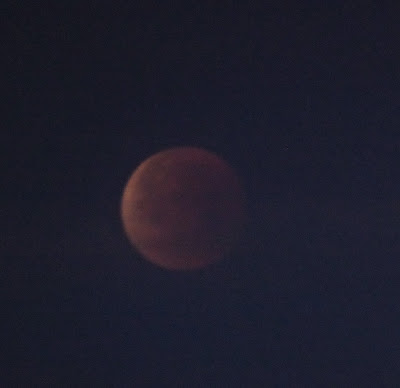 About an hour later it looked like this. Very cool to see. 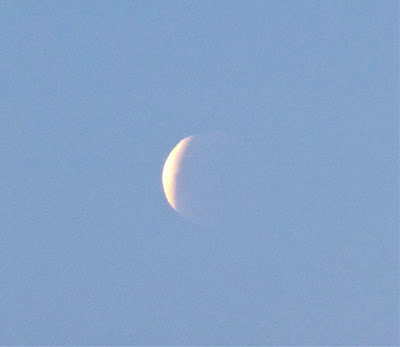 So, that's our big news. We're very excited about it. Of course, we will continue to come to Wisconsin and Nebraska to see our family and friends!

Don’t wish upon a star – Reach for one!
Posted by RV Khronicles of Kevelyn at 8:57 AM 9 comments: