Fabulous Weather and an Interview

The past seven days have been some of the most beautiful weather ever. Sunny, highs near 80* every day, and no humidity. The sky is that gorgeous crisp blue color you only get in fall.  The great weather brought many campers to our park. We only had one vacant site by the time Saturday evening rolled around. The fantastic weather has caused the trees to explode with color. 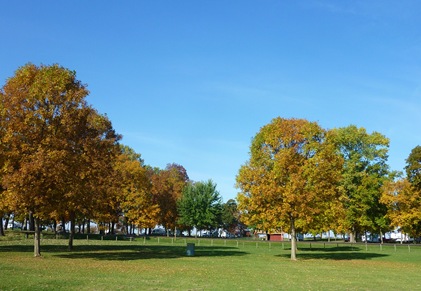 Unfortunately, the unit camped right next to us this weekend were the most annoying people we’ve encountered during the entire season. We don’t have a problem being friendly, but the woman talked non-stop. As soon as she saw us, she was over here. Then she acted like she was our helper, telling other campers the rules. Their dog was a yappy little barker. Her grandchildren came Saturday afternoon and ran wild through the park without any supervision. They were running around behind our camper. I was afraid they’d knock our satellite dish over. One of them had an accident in the bathroom. They were just a real pain!

Thank goodness we’re leaving tomorrow. We’ve had enough of “customers” for a while. Don’t get me wrong, we loved our summer here. But, after almost six months, it’s time to move on for a while. We’ve agreed to come back next year, and are happy to do so. Kevin will be the caretaker again, and we’ll be camphosting, too. Just need a break :)

On Thursday I went to Eric’s one more time before we leave. He had to replace a few boards while siding his garage. So, I gave them a coat of paint for the winter. I also did our laundry. Now it’ll be back to laundromats for a while.

A couple of weeks ago I got an email from Shane who hosts a website called NationalRVParks.com. He’s been reading my blog, and wanted to know if we’d be willing to be interviewed for his website. I said sure. So, he sent me some questions, I responded, and here is the result. Isn’t the internet amazing.

Tomorrow we leave for Iowa for a few days to visit Kevin’s brother and family. We’ll make our way to Coffeyville, Kansas where we begin our job at Amazon on October 16th. So, the next adventure begins.

I’ll leave you with a picture from our “yard”. If you haven’t guessed by now, we’re Wisconsin sports fans. Our Milwaukee Brewers won the first round of the play-offs in dramatic fashion in the tenth inning of game five. They begin round two against the St. Louis Cardinals this afternoon. Go Brewers!!! So far this season, the Wisconsin Badgers and Green Bay Packers are undefeated. How exciting!! 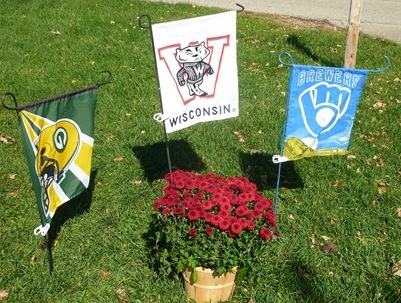 Posted by RV Khronicles of Kevelyn at 1:28 PM 2 comments: Links to this post