Last Sunday we went to the Fireman's Parade in the small town of Iron Ridge which is about 30 miles from us. 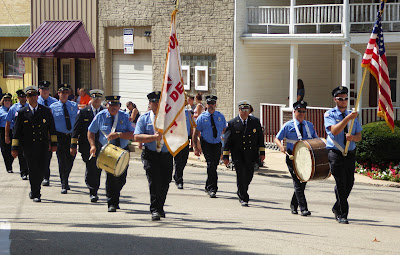 We had both heard on the radio that the UW-Madison Marching Band was going to be in the parade. If you've never seen them perform, you've missed a great show. I believe they are one of the best, if not the best, college marching band in the country. Their halftime and fifth quarter shows are fantastic.

We figured it wouldn't be the entire band, and we were correct. There were about 25 members, all brass and two percussionists.  Here they are in the parade. 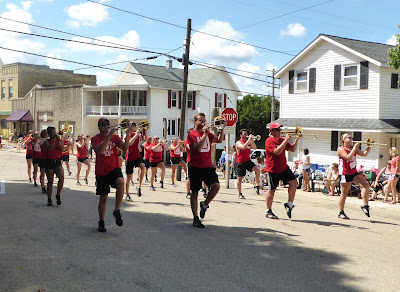 After the parade, there were all kinds of activities at Fireman's Park. We walked over and watched some of the bands perform. I thought it was a real nice touch to allow each band that marched in the parade to put on a little show at the park afterwards. There were community bands, the Horicon High School Band, the UW band, and a Highlander group.

The UW-Madison band did several numbers, getting the audience involved in the fun. The amazing thing about this group is that they look like they are having a blast; but if you really watch and listen, they are fantastic musicians. The girl with the cymbals had incredible twirling skills. 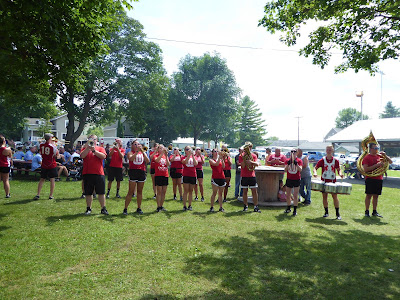 We also enjoyed listening to the Tripoli Shrine Scottish Highlanders perform. They played Amazing Grace which always sounds so beautiful when done with bagpipes. 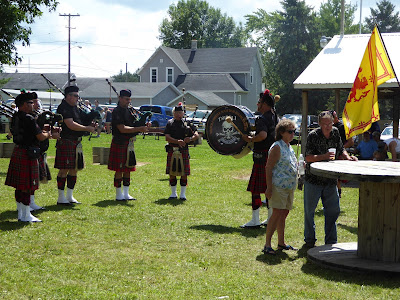 Things at the campground are starting to slow down a little. We've only been about three-quarters full the last two weekends. Labor Day will be full again, but then September will depend on the weather.  The weather has been very humid this summer. We've had some hot days, too; but the humidity is getting on my nerves. I'm ready for fall to come this year.

Today is my birthday. My last year to be in the 50s before the big 60 next year. I have big plans for the day. I'm working in the morning, going to do laundry at the laundromat and some shopping this afternoon. Two of my least favorite things. Oh well, it has to get done and today is the best day of the week to do it. I will be treating myself and Kevin to a blizzard from Dairy Queen though.

We had planned to go to the Dodge County Fair tomorrow, but temperatures are predicted to be near 90 and humid again, so we'll postpone that adventure until next year. We have to drive into the Milwaukee area tomorrow morning to sign some documents at our financial planners office, so we're going to stop and visit my mom and have lunch with her.

Then we'll stop at Eric's  house to pick up the new laptop I ordered. My current laptop is eight years old and has Vista as the operating system. Although it still works, it is very slow, and it was time for an update. The new one has Windows 10. I hope I like it. I've put off getting a new one because I just didn't want to deal with downloading everything I want and setting it all up to fit my needs.

The biggest pain I think will be trying to figure out how to transfer all of my iTunes files to the new laptop. If anyone knows of an easy way to do it or a link that explains exactly what to do, I'd appreciate any help or advice I can get.

Don’t wish upon a star – Reach for one!
Posted by RV Khronicles of Kevelyn at 9:59 AM 1 comment: Links to this post