I drove back home yesterday. There was quite a bit of traffic so it took me about 30 minutes longer to get home than it took to drive there on Wednesday. The weather was good for driving and other than a lot of traffic, it was an uneventful drive. Just long! I’m not used to being in a vehicle for 8 hours anymore. But, it was worth it to spend time with my son.

We started the day with a delicious breakfast cooked by Korey and Laura. They are both full-time program directors for Pathways Camping Ministries which owns the camp. 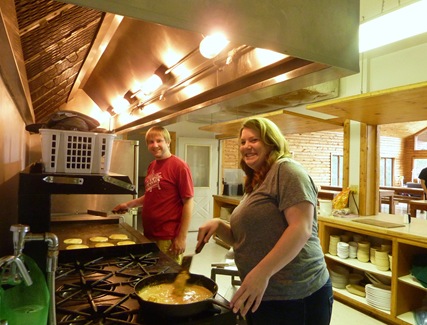 After breakfast Korey opened the ropes challenge course for any family members who wanted to try climbing the rock wall. I’ve tried twice before, but got scared of the height and have not made it to the top. On Saturday about 25 people tried it including one grandpa who was celebrating his 78th birthday that day. He not only made it to the top, but he rode the zip line down. Wow! 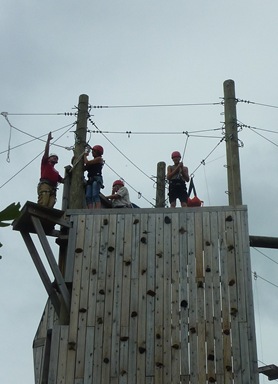 Here’s Korey explaining to one of the moms how he is going to hook her up for the zip line. He’s wearing the red shirt standing on the platform. The wall is over 32 feet tall. There was one dad who didn’t make it to the top. He had the same problem I have. He got about half way up and couldn’t deal with the height. I thanked him for making me feel better about not being the only one who didn’t climb to the top. I really am amazed at the parents who climb it successfully. 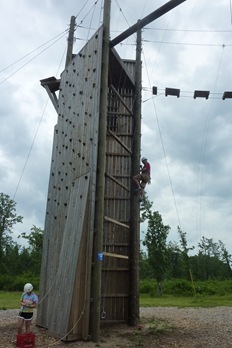 After two hours, everyone was done and Korey made his way back down using the telephone pole on the right side. I’m very proud of the job he does. He is the High Adventure Director so the challenge course is a big part of his job. He’s so good with encouraging everyone and helping people conquer their fears. During the week he works with the older kids and they do all kinds of amazing things on the course. He is also in charge of the Wet and Wilderness program which involves the kids and counselors going out in canoes and camping out along the river for a week. Korey certainly works hard during the summer.

It rained for about 2 hours during the middle of the day. We were going to go canoeing, but the weather wasn’t that nice. So, instead we took a long walk on some of the trails on camp property. They have about 300 acres so there are lots of trails and campsites they use for overnights with the kids.

I stay in the lower level of the retreat center. There are several rooms with separate baths, and they let family members stay for free. Much better than staying in the cabins or a tent :)

The sun came back out and we had our picture taken on the back deck of the retreat center. The lake is behind us. 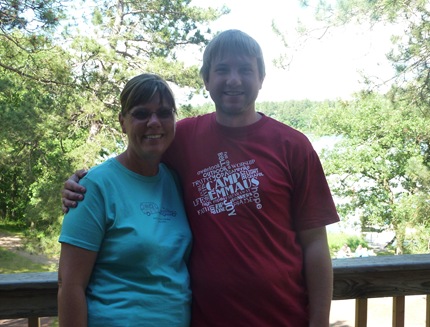 Then it was dinner and evening worship. I think they have a great group of counselors this summer. They all seem very enthusiastic and seem to work very well together.

Kevin and I took our walk this morning. Now I’m chilling out inside. It’s supposed to be in the mid 90s, very humid and windy through Wednesday. Tomorrow I’m going to Eric’s to start painting his spare bedroom. I’ll finish the outside painting when the weather is a bit cooler.

Posted by RV Khronicles of Kevelyn at 11:37 AM 2 comments: Links to this post