Yesterday we spent the day exploring South Padre Island. We got up early (for us) and were on the road by 8 am. Its about a 1.5 hour drive from Mission. 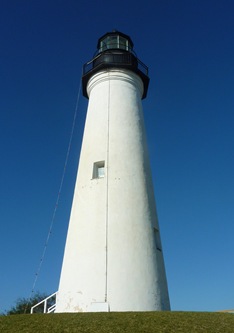 Our first stop was at the Port Isabel Lighthouse which is just before the bridge that takes you to the island. We didn’t pay the $3 per person to tour it as we’ve seen plenty of other lighthouses and had other items on our agenda for the day. But, I had to stop for a picture outside because there’s just something about any lighthouse that screams “Take my picture”! 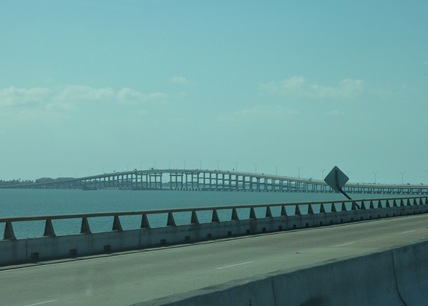 The two mile long Queen Isabella Memorial Causeway takes you to the island. It’s the only road access to the island. I can imagine its quite a mess if there is a hurricane evacuation.

Our next stop was Sea Turtle, Inc., a non-profit sea turtle rescue, education and rehabilitation center. While researching what to do on the island, this place kept coming up as one of the best tourist places to visit. I’m so glad we did. They ask for a $3 per person donation, and it was well worth it. We arrived at 10:00 when they opened. If you ever go there, I would recommend arriving when they open as they do a couple of presentations first thing. The first demonstration was Allison, an Atlantic Green Sea Turtle that was attacked by a shark and only has one flipper. She was fitted with a customized prosthetic device so she can swim in deep water. 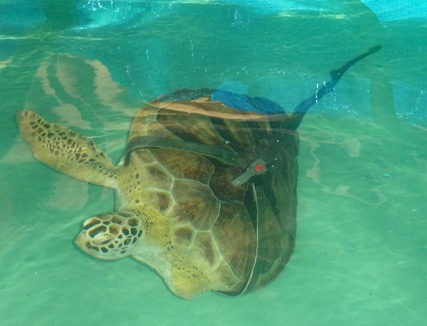 Curator, Jeff George, gave a very informative 15 minute presentation about sea turtles. He explained how poaching had almost wiped out the entire population and caused all species to become endangered. Great strides have been made to save these amazing creatures. Fascinating stuff!

I had no idea Atlantic Green Sea Turtles are so beautiful. 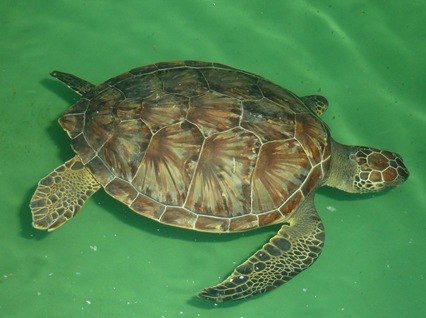 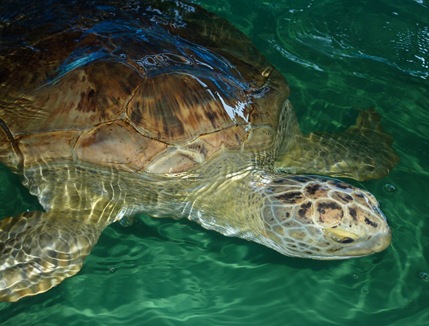 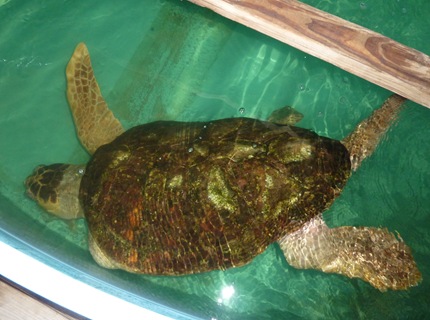 This guy has learned to come to the window and he will get lettuce. How funny! 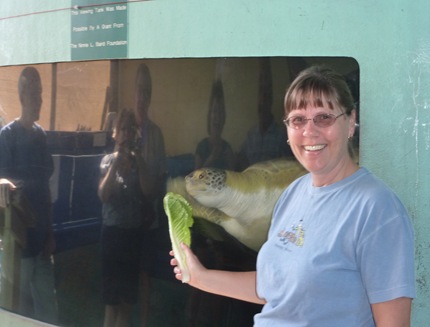 Our next stop was the Convention Center to see the Whale Wall. This is #53 out of the 100 whale walls painted by acclaimed artist Wyland, and it covers three walls. We’ve seen other whale walls in Hawaii, Florida and California. 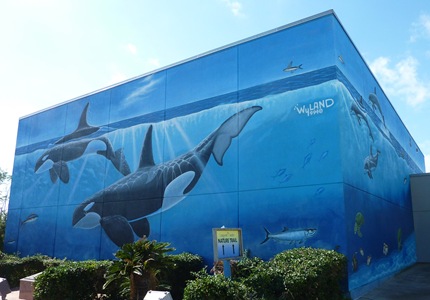 A pleasant and unexpected surprise was the free Laguna Madre Nature Trail behind the Convention Center. It’s a series of boardwalks with some great birding opportunities. So, you get to see some more bird pictures.

There were several kayaks out in the water admiring these Redhead Ducks. 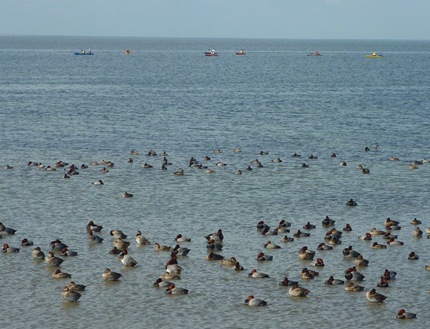 I was very excited to get this next shot. Notice the Great Blue Heron in the top left and the alligator in the bottom right of the picture. Click to see a larger view. 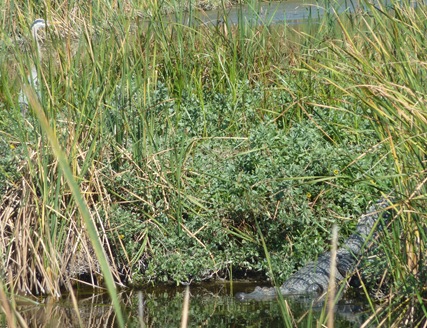 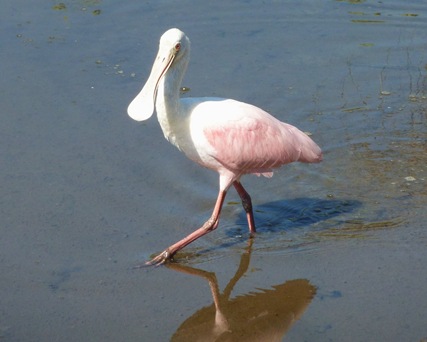 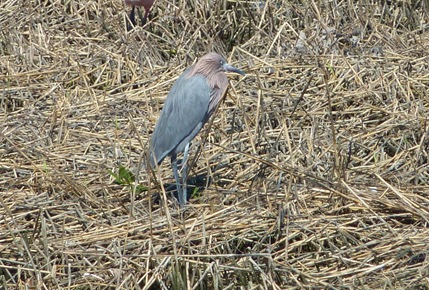 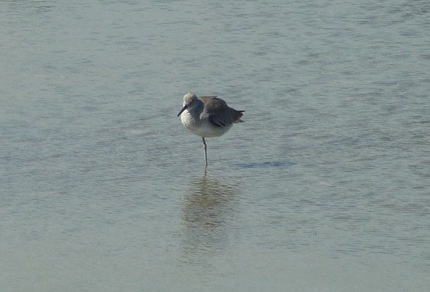 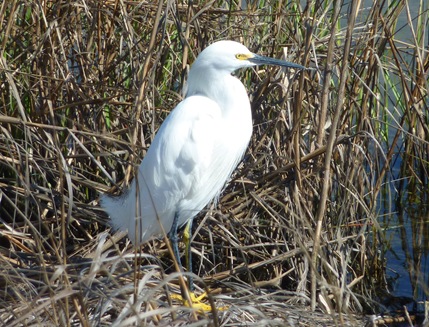 This is either a Tri-Colored Heron or a Little Blue Heron. 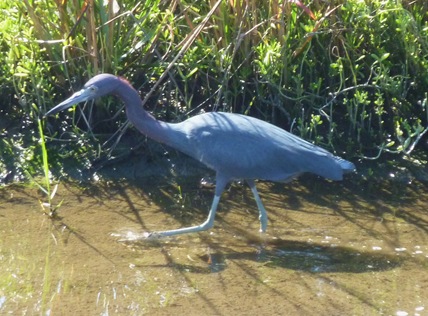 We watched this Great Blue Heron fish for his supper. How cool is that! Here he is on the banks of the water. 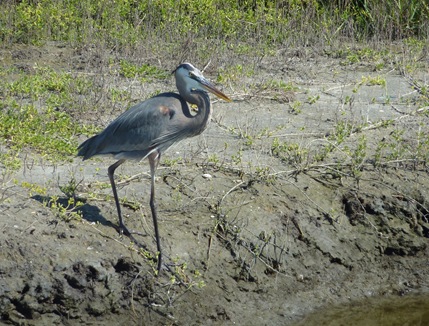 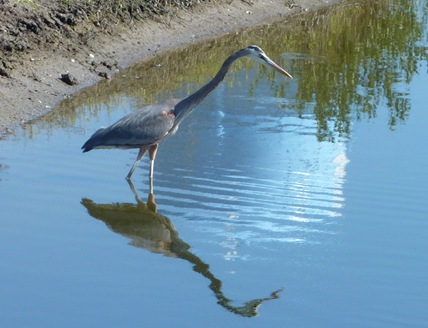 Bam, a quick plunge into the water. 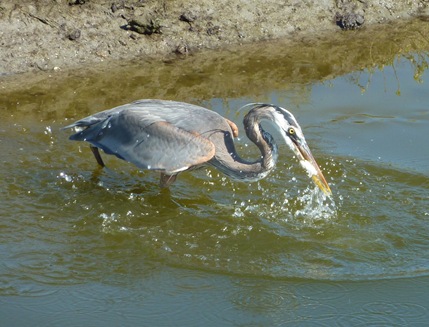 Success, a fish in his mouth/bill/beak! 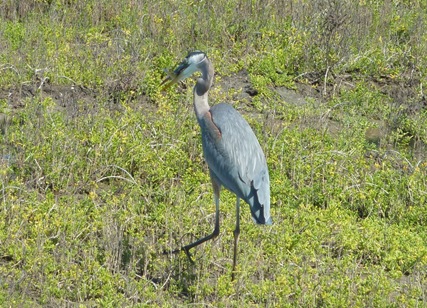 We then actually could see the fish wiggling down its throat. Gross!

I forgot what this bird is called, but the guy next to me told me to take its picture because it was pretty rare. He told me the name, but my brain was pretty overwhelmed with bird information by that time :)  Anyone out there know what it is? 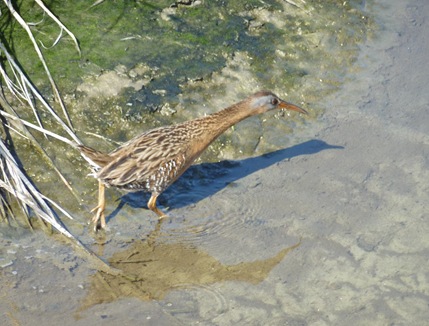 After all that bird watching, we were ready for lunch. We ate at Parrot Eyes based on the recommendation of bloggers John and Sharon. They have a $6.95 deep fried shrimp lunch special that was very good, and I had printed an online coupon for 15% off. The $1.75 margaritas were also quite yummy! We got 7 large butterflied shrimp with fries and cole slaw. A great outdoor dining deck with some caged parrots. 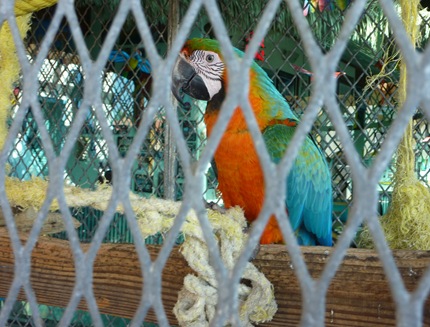 Several Brown Pelicans were hanging around hoping for a handout. 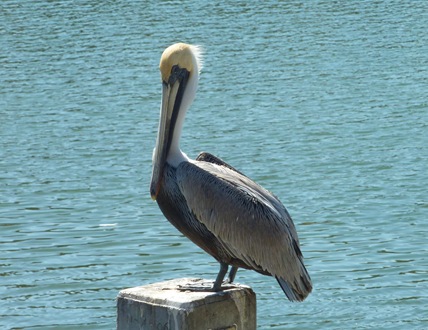 After lunch we did some beach walking to burn off some of those calories. There were quite a few people shore fishing. As you can see, vehicles are allowed to drive along the beach. 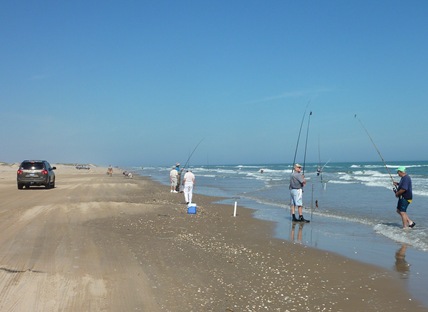 This guy from Michigan showed us his catch. He said they are mostly white fish. 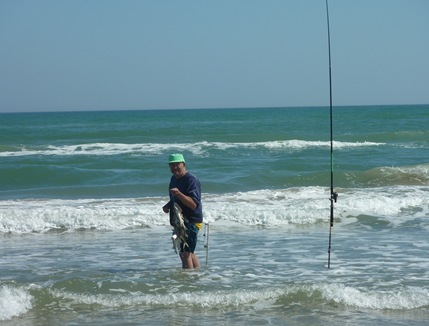 Watch out for those jellyfish. We learned at Sea Turtle, Inc. that even after they are dead the venom can still get you for up to two days. Don’t touch!! We also learned that turtles can’t tell the difference between plastic shopping bags and jelly fish, which can cause great problems for the turtles when they swallow a bag. Merchants on the island do not use plastic bags. 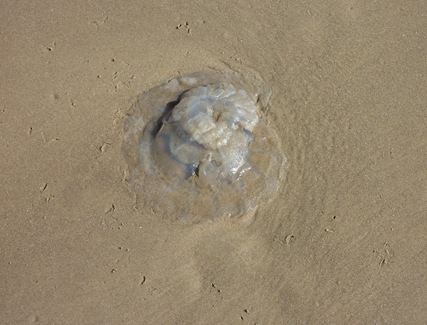 We spent a few hours on the beach walking and enjoying the beautiful weather. Although there are quite a few buildings along the beach, it is not a very developed beach area. No boardwalk, benches, shops, rental huts, etc. Just beautiful ocean views.

We ended a wonderful day with a dip in the pool and hot tub back at the campground. Life is definitely good!!

Posted by RV Khronicles of Kevelyn at 12:12 PM 7 comments: Links to this post