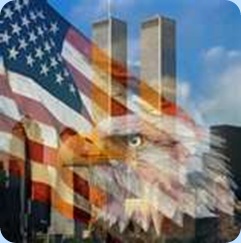 On this anniversary of the terrorist attack on the towers in New York, I’d like to reflect on how lucky I feel to live in this country.  As I’ve said before, my parents immigrated to the US from Germany when I was a baby.  I have always felt so appreciative to be a citizen of a country where I have had the freedom to pursue my dreams; now more than ever! 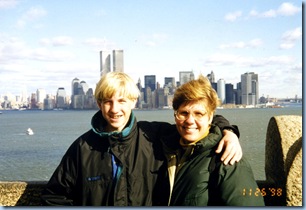 This picture of Korey and myself was taken in 1998 during a trip to New York. Both boys were in band, and I chaperoned the band trip to New York for the Macy’s Parade.  The picture is taken from a look-out platform on the Statue of Liberty.

On that tragic day 9 years ago, I felt such a connection to what was happening because I had been there a few years earlier.  We stayed at the Marriott Hotel in front of the towers (the building was crushed when the towers fell).  I kept thinking about what we would have done if it had happened while we were staying there.  My heart goes out to the families who lost loved ones in the brutal attack!

We’d like to thank all of you who sent your best wishes for a speedy recovery for Kevin’s knee injury.  He’s doing better.  He’s able to limp around, but still taking it easy to make sure he’s ready to leave next Friday.

Our site here at the park only has electric hook-ups.  We don’t have water or sewer.  There is a water spigot for campers to fill their tanks up the hill from us which we can reach with two hoses.   Kevin has always been the one to take care of tank filling and emptying.  So, this week I learned how to do those chores.  On Wednesday, he came out and sat on a stool and walked me through filling the water tanks.  We put off emptying the black water tank, but yesterday it had to be done.  He was able to come out and hobble around.  Between the two of us, we got the job done.  I didn’t like that job one bit :)

On Thursday I went to the Madison Quilt Expo.  In 2002 I decided I wanted to learn how to quilt so I could make a t-shirt quilt for Korey, our youngest son, as a high school graduation gift.  He was very active in many organizations, and had all kinds of shirts as mementos of his activities.  I took a beginning quilting class and was very pleased with how his quilt turned out.  I never took a picture of it; I need to do that.  He really likes his quilt.

After that, I was hooked on quilting.  I took a few more classes at a local quilt shop.  Mostly, I’ve been making baby quilts with fabrics I had in my stash after years of crafting.  I used a few for gifts and donated a few to Project Linus.  I’ve also been making the “Snap Happy” bags I posted about on August 1st.

I’d never been to a quilt show before.  Wow, was I impressed.  The Madison show was huge.  There were many classes offered and hundreds of vendors.  There was a very large display of quilts for judging.  There were so many beautiful quilts; my head was swimming by the time I got to the end of the display.  I don’t know how the judges can pick a winner.

I was especially blown away by the hand quilted entries.  It looked like these quilts were done on a sewing machine.  The stitches were so small and evenly spaced.  Wow!!!

I saw so many projects I wanted to buy.  I had to restrain myself, and came away with spending about $100.  I could have gone nuts! 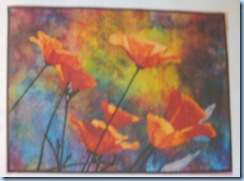 I bought 3 projects.  One is a beautiful poppy quilt.  After I opened it up, I realized it’s pretty hard.  It’s kind of like putting a puzzle together.  I may save this one until I have a little more experience. 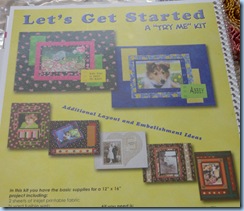 Another project was using photos to make placemats or other quilting projects.  I’m planning on making some placemats with beautiful nature pictures of places we will visit.  I’m also going to make some placemats for my mom with family pictures. 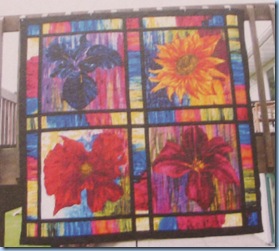 The third project I purchased were gorgeous flower fabric panels to make this quilt.  I love the colors!  I’ll be keeping this one for myself :)

I also purchased a small ironing wand to press open seams and iron small quilt pieces.  I used it yesterday, and it’s great!  No more digging out the portable ironing board and large iron.

These projects should keep me busy until next year’s show!