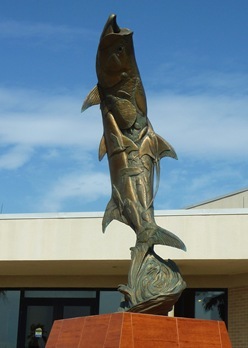 The University of Texas has a Marine Science Institute in Port Aransas with an outdoor Wetlands Education Center. They offer free public tours on Tuesday and Thursday mornings. However, this weekend is the Whooping Crane Festival in Port Aransas so there were extra tours offered at the Institute.

It was finally a nice day on Saturday so we joined the noon tour. We learned about estuaries and what is being done to preserve the Texas coastline. An estuary is where fresh water flows into salt water. We also learned about some of the native plants that grow on the sand dunes and how important those plants are to the preservation of the barrier islands.

This Snowy Egret was watching over the marshes. 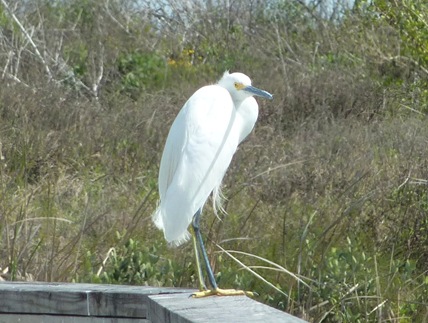 The highlight of the day was while we were at a spot overlooking the ship channel. There was a very large ship coming into the channel and several dolphin were playing at the bow of the ship. We’ve seen dolphin in the area before, but they just come up enough to see their back and fin. These dolphin were having a great time jumping completely out of the water in front of the ship. Apparently, this is fun for them and they can be seen jumping in front of ships from time to time. I wasn’t able to get a picture, but it was an absolute delight just watching them!

Friday was cool, overcast and windy, but I was sick of staying home so we headed to Rockport where there were two indoor places to visit.

We took the free ferry across the channel where we saw another dolphin swimming along next to us. 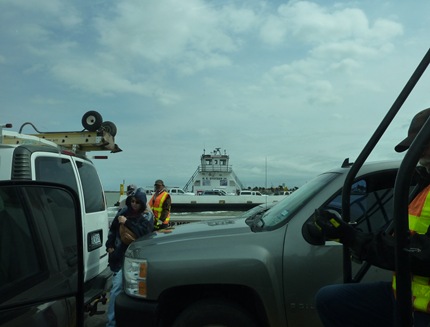 We parked near the Rockport Beach where there is a very large blue crab statue. It is the symbol of Rockport and measures 25 feet wide and 27 feet long. The original crab was a bit smaller and was on top of a local restaurant. It survived three hurricanes. It was replaced in 2012 by the current statue. 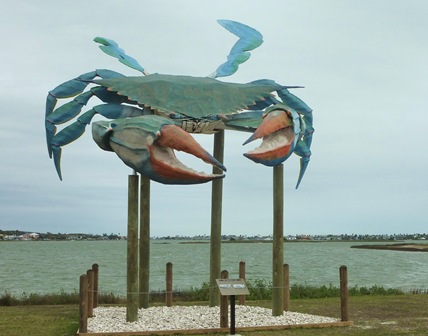 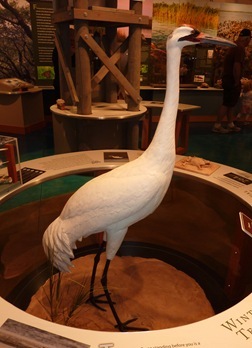 We walked over the the Rockport Aquarium and looked around. Not too much to see there. Next we walked to the Bay Education Center and watched a program about the oceans. The center had some interesting displays including a life size statue of a whopping crane. The whopping cranes are an endangered species. They estimate there about 300 of them that migrate to this area in the winter. This week we’re going to go to Goose Island State Park where there is a possibility of seeing some of these rare cranes. It sure would be cool to see them!

Posted by RV Khronicles of Kevelyn at 9:52 AM No comments: Links to this post