We had a wonderful time with Korey and Cathryn last weekend. On Saturday we golfed on a beautiful fall day. The only downside was that Cathryn lost her iPhone on the golf course. She didn’t realize it until we were done. They gave the pro shop Korey’s number in case someone found it. 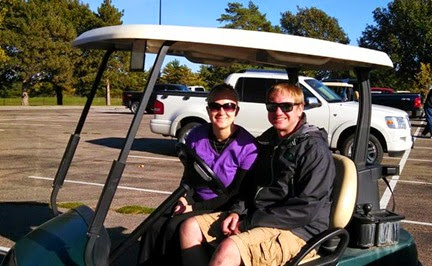 Sunday morning we attended church with Korey and Cathryn and then went to the local farmer’s market. Cathryn called the golf course, and the phone had not been turned in. She asked if they could use a cart to drive around and look for themselves. The guy in the pro shop was nice enough to let them use a cart for free.

We stayed at their apartment and watched football while then went off on the search. We thought it would be virtually impossible to find it as she wasn’t sure which hole she lost it on. A miracle happened and Korey spotted the phone in an area he remembered they both were in. Cathryn was so happy!!!

The two of them are on a fall co-ed softball team, and the playoff games were Sunday afternoon. We went along to watch. They played a really good team in the first round, so were done after the first game. It was still fun to watch them.

Cathryn’s waiting for a fly ball in the outfield. 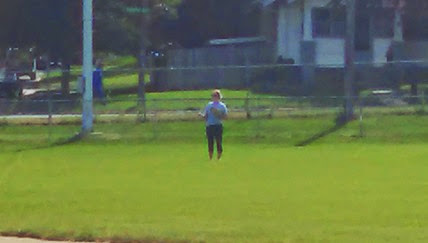 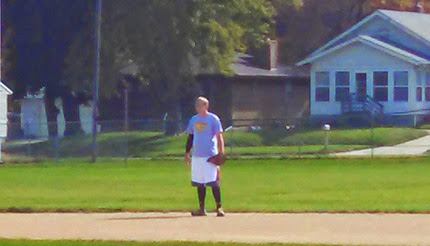 We enjoyed dinner at a Mexican restaurant and watched some TV back at their house. Then it was time to say goodbye until December when we return to Lincoln for Cathryn’s graduation from grad school.

We left on a cool and rainy Monday morning. After about an hour the rain stopped, but it was quite a windy drive to Cheyenne, Wyoming. Our fuel economy was not very good that day. We don’t like to drive more than four or five hours when towing, but we’re pushing it a bit on this trip so we can get to Yuma faster.

We saw several semis transporting live turkeys. I’m guessing Thanksgiving dinners are on the move. Notice the one on the top left. I think he’s trying to fly the coop!! 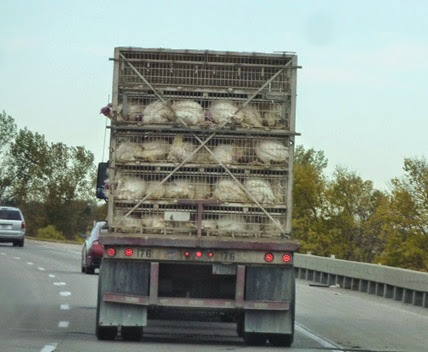 Today we drove from Cheyenne to Las Vegas, New Mexico. Most of the day we were on I-25 through the entire state of Colorado. The scenery was gorgeous. Snow on the mountains and fall color in the trees. It was sunny all day and no winds. Much better fuel mileage today. 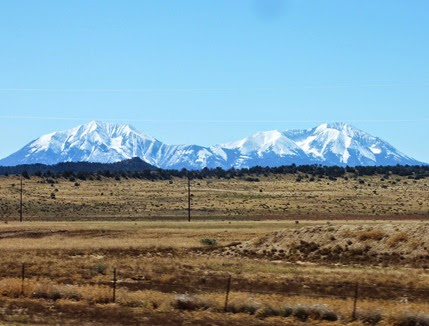 Another bonus was that the temps got into the 70s. The forecast for tomorrow is near 80, and then near 90 in Yuma. Summer is back!!!

Posted by RV Khronicles of Kevelyn at 9:18 PM No comments: Links to this post