We hope all of you had a joyous Easter day. We sure did!

Its been several years since we’ve been able to spend Easter with Korey, so it was a real treat to spend the day with Korey and Cathryn. Of course, we missed the rest of our family; but did call them and had a nice conversation with everyone in Wisconsin.

We started the day by attending church where Cathryn sings in the Celebration Choir. She’s the one in the middle behind the little girl. They sang two beautiful songs including the Hallelujah Chorus, which is one of my favorites. 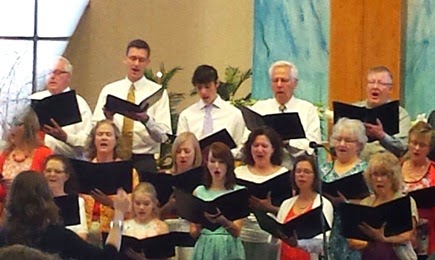 Then we headed back to their apartment where we were treated to a delicious ham dinner. After dinner, we took a walk around their neighborhood on a sunny 70 degree day. Some of the trees are starting to bloom in Lincoln. Sure was a beautiful day. 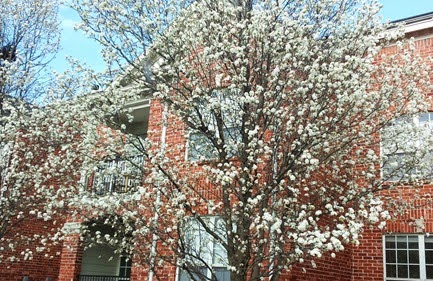 After the walk, it was time for dessert. I brought poppy seed cake. This is one of Kevin and Korey’s favorites. The recipe is from Kevin’s mom and has lots of steps, so I usually only make it once or twice a year.

We sure appreciate that we were able to spend the day with our kids. In order to be here in time, we did three long travel days getting from Phoenix to Lincoln.

Both of us were ready to get out of the Arizona heat, but because we didn’t do a gradual trek north; we were in for a bit of a weather shock.

The first night we stayed at Enchanted Trails RV Park in Albuquerque, New Mexico. It’s a Passport America park and a great place for a one night stop. It was quite windy, but we were glad we weren’t there a day later. They were expecting 60 mph wind gusts the next day.

I learned an important lesson about believing what you read on websites. The Super 8 in Fort Morgan claimed to have parking for semis and RVs. The last hour drive before we arrived was in sleet, so we were ready to call it a day. When we got there, Kevin had to weave through an Arby’s parking lot to get to the hotel. The parking lot was not at all large. Luckily, we were there early enough so there weren’t that many cars. The office lady told us to park along the perimeter, taking up a whole row of parking spaces. By morning, the lot was full, and Kevin had to again weave through the lot to get out. I’ll definitely be calling ahead if we ever do this again. 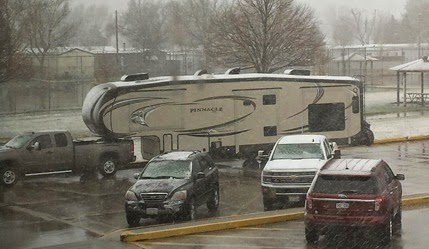 It ended up snowing about an inch overnight, but the roads were just wet in the morning. It sure was cold out; only 27 degrees when we left. As we continued our drive through Colorado, there was some snow and ice in the fields; a very pretty site. By the time we reached Nebraska, the snow was gone. 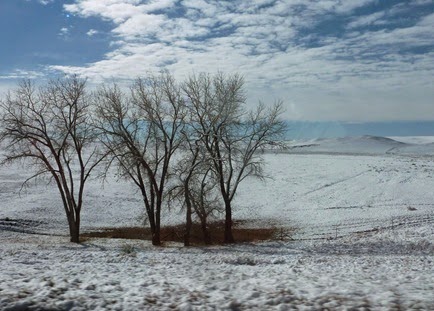 Today is a super special day for Wisconsin sports fans. It is opening day for the Milwaukee Brewers baseball team. Our son Eric is lucky enough to be attending. Tonight the Wisconsin Badgers basketball team is playing in the final game of the NCAA March Madness tournament. They haven’t won it since 1941, so I’m sure all of Wisconsin has high hopes. The semi-final game against Kentucky was very exciting. After some of the poor sportsmanship shown by a few Kentucky players, I’m glad Wisconsin beat them.

We'll be seeing Korey and Cathryn a few more times this week. Our plan is to leave here next Sunday and arrive in Wisconsin on Monday.