Most days since we’ve been here, we’ve been hiking for about four or five miles in the desert behind our campground. It feels good to be walking again.

I’ve found all the different types of Saguaro cactus to be very interesting. They seem to be like snowflakes, no two are exactly alike. Some have no arms, some have many arms, some have strange shaped arms. There are also holes in some of them. I think these holes may be made by birds. 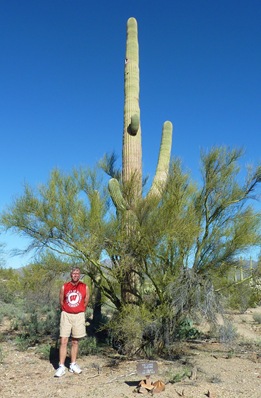 This one has a sign by it that says it’s about 200 years old. It’s huge. Kevin was kind enough to pose next to it to give you perspective of it’s size. 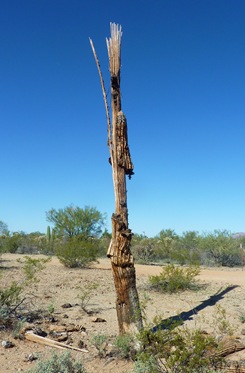 There are also some dead Saguaro in the desert. I was so surprised to see how they grow. The inside is actually a group of tall sticks. Then there is some type of covering that wraps around the sticks which is the green part you see on a live plant. Here’s a dead one that is still standing.

Next week we’re planning on going to Saguaro National Park. I’m sure we’ll learn much more about these amazing plants.

Yesterday we drove around Tucson and stopped at two truck dealers. We plan to buy a new truck this year. We thought we’d see what was available. We’re looking to buy a GMC or Chevy 2500HD extended cab diesel with a long box. There was not a single long box at either of the dealers.

Then we stopped at La Mesa RV to look at some RVs. We saw a Heartland Landmark that was very nice. It had some features that we liked better than the one we currently have. But nothing that would make us actually buy.

Kevin told me that unless I’m totally blown away, there’s no reason to buy a new one. He’s right. This is our home, and I’m very happy with the one we have. In order to spend the money to buy a new one, I will have to be blown away and swept off my feet. So far, that hasn’t happened. Good news for our bank account :)

We also stopped at Lazy Days RV. They had some Redwood 5th wheels. These came out in 2010 and are manufactured by Thor. They are called Residential and are being marketed specifically to fulltimers. Again, we saw some things we liked. In some ways they were very nice, but then there were some things that looked kind of cheap.

It was fun looking, and we didn’t spend any money. A good day!

Posted by RV Khronicles of Kevelyn at 9:38 AM 3 comments: Links to this post