An Invasion and a Spy

A couple of weeks ago I noticed a lot of vines were suddenly appearing on trees and bushes in the park. Driving around the area, I noticed they were not only in the park, but all over the place. 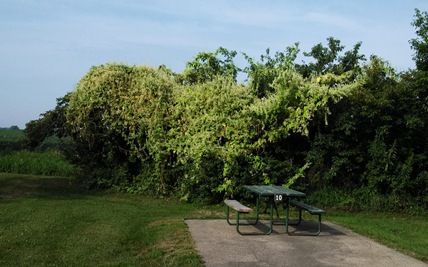 The vines are bright green in color and very noticeable. On Monday there was an article in the Beaver Dam Daily Citizen explaining what they are. The article was titled “Wild Cucumber Invasion”. Because of last year’s drought these wild cucumber vines are having a prolific season this year. The plants are native to Wisconsin and considered a weed. Since I haven’t seen them before, I’m guessing the winter freeze will kill them off.

Yesterday we had quite the excitement in the park. At 7:30 am a car pulled in and parked facing the road. There appeared to be one person in the car, and he just sat there until 8:00 when Kevin went outside.

Kevin walked over and asked if he could help. The guy said he was a private investigator and was investigating some guys doing construction work at a house across the road from the park. He had a business card, wasn’t bothering anyone in the park, so Kevin left him alone. After all, we are a public park and sitting in your car didn’t seem like a crime to us. There weren’t any children in the park or the house across the street, so we didn’t think there was any danger to anyone. 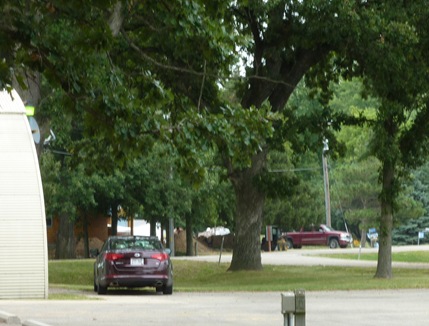 A few hours later the park attendant came to the park. She is employed by the county and comes by a couple of times a week to collect camping fees and put up reservation notices on the sites. I was out walking while she was here, and Kevin was mowing. Apparently, she didn’t like the guy sitting there and called the sheriff after she left.

Next thing I know, there is a sheriff’s car flying into the park. He pulled up behind the guy and spent about 15 minutes talking to him. 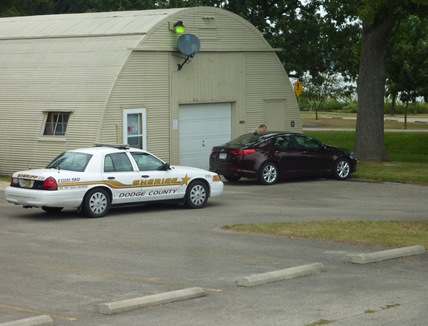 Then, a second police car comes flying into the park, and both of them talk to the guy. 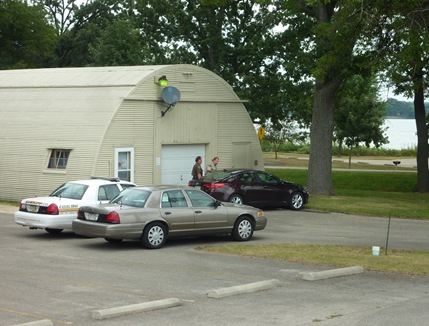 And then, another sheriff’s car comes flying into the park. All three of these guys talk to the guy for quite a while. 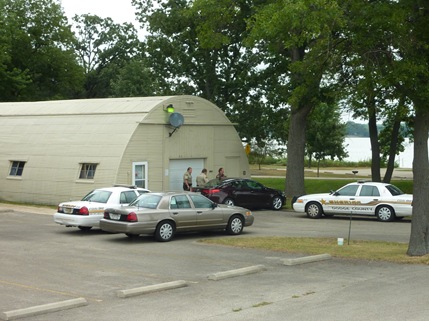 I finally went out to watch. Kevin got off his mower and also came over. One of the officers came over to talk to us. We explained that Kevin had talked to the guy, and we didn’t have a problem with him sitting in his car. The officer said the guy wouldn’t show them any credentials and wasn’t being very cooperative. I did hear them discussing with him about being a taxpayer and the park being public property.

Eventually, the officers and the guy all left. One of the officers told Kevin the guy was not to come back, and if he did we were supposed to call them back.

Dodge County is a large area. I guess not much goes on in the county since three officers had a couple of hours to spend on this incident. We really wish we would have been consulted before the police were called. Since we live at the park, if there were to be any repercussions from this, we would be directly involved.

Makes you wonder what he was doing here in the first place. Was one of the construction workers cheating on his wife, or is one of them collecting disability and working, or are any of them illegal immigrants. So many possibilities. I wish I knew what that was all about!

Posted by RV Khronicles of Kevelyn at 7:05 AM 2 comments: Links to this post