Now We’ve Seen It All

Just when you think you’ve seen it all, something new shows up that surprises the heck out of you.

Yesterday we were sitting outside enjoying another amazing summer day, when I saw a vehicle pulling a trailer holding a picnic table coming down the road. Now, that’s not that unusual. But, wait. The picnic table has big drums attached to it, and they’re pulling into the boat launch.

This I’ve got to see. We walked over to the pier, and sure enough. They already had their “boat” in the water. It had a trolling motor with a battery box attached under the table. I asked permission to take their picture, and they were totally willing. Apparently, they had seen this on YouTube. 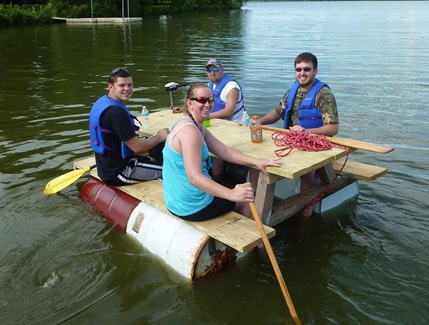 The guy wearing the hat and his dad built it, and yesterday was it’s virgin launch. They had paddles to help with steering. We saw them leaving about two hours later with the table back on the trailer, so they must have had a successful first time out. Too funny :)

We had another busy weekend in the park. We weren’t totally full, but the people who were here sure bought a lot of firewood. We sold almost $200 worth which is a lot for us. I was a little worried they’d be up all night with big fires, and we might have some noise complaints. But, everyone behaved very well.

Last Monday Kevin and I played golf at one of our favorite courses, Kestrel Ridge in Columbus. We both had decent rounds, and the weather was great. In fact, after the cold snap last weekend, the entire week was beautiful.

Not much else new around here other than wedding preparations. Yesterday we loaded the beverages and coolers for the rehearsal dinner into the truck. Korey wanted to have the dinner at a park so people could mingle more. They are planning some games. It should be a fun time. He’s having it catered by Qdoba.

We rented a shelter at a park in Fargo. My mom and I made some centerpieces, and I have some other decorations to spruce things up a bit. Here’s one of the centerpieces. I’ll have many more pictures after next weekend. 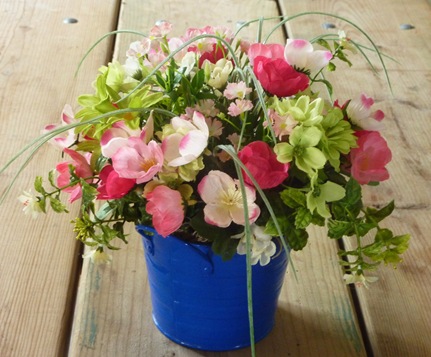 The extended forecast for next weekend in Moorhead is looking to be pretty much perfect. I am so looking forward to all of the festivities. We’re leaving Wednesday and will come back the following Monday.

Posted by RV Khronicles of Kevelyn at 7:29 AM 7 comments: Links to this post