The title of today’s blog is courtesy of Kevin.  He took this picture last night.  I admit it, I get cold easily.  I especially don’t like any cool breezes on my ears.  So, the thermometer said it was 68 degrees and the hood was up.  Honestly, the air feels cooler as soon as the sun goes down.  It has something to do with the lack of humidity. Kevin thought our boys back in the cold Midwest would get a kick out of this picture. 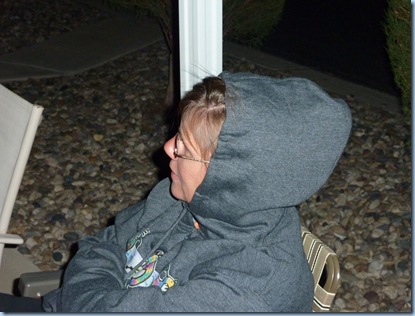 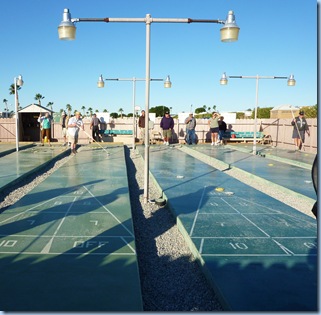 We’ve been pretty much hanging out at the RV park relaxing and participating in some of the park activities.  We’ve played shuffleboard a few times.

We’ve been swimming and bike riding.  On Thursday the guys played golf.  On Friday night we went out for a fish fry.  This time the food was very good.

On our way to dinner we stopped at a few RV dealers.  We looked at Heartland, Carriage and Montana 5th wheels.  We saw some great features, but nothing that would make us want to give up ours.  Joan saw a Big Horn she liked.  I think she REALLY liked it.  We’ll see what happens! 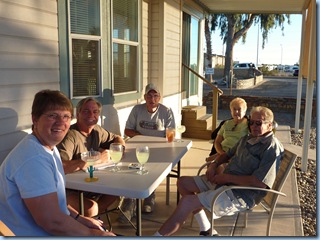 Today our friends, John and Carol are leaving Yuma so we had a little cocktail party yesterday afternoon to say goodbye.   From left to right are Joan, Kevin, Al, Carol and John.  We’ll see John and Carol again in Wisconsin in April.

Joan has a hiking booklet someone in the park lent her.  Yesterday we decided to try one of the suggested hikes.  It was supposed to go to an old mine in the desert back in these mountains. 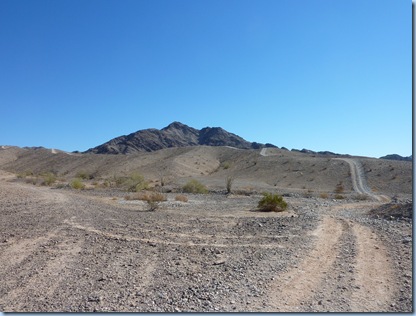 It was not a marked trail.  We parked at the designated spot and followed an off-road vehicle road.  The directions weren’t the best, and we ended up following a wash, scrambling over rocks and boulders.  Eventually, we got to an area where we thought we saw the roof of the mine.  There wasn’t a safe way to get down so we went back.  I took some pictures of what we thought was the mine.  After zooming in on the computer, I think we were just looking at rocks.  We never found the mine.

But, that’s okay.  We hiked for 1.5 hours and got a good workout on another fantastic day. 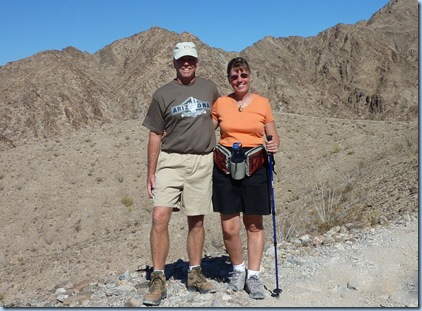 We made our way back to the car following the ATV trails.  I’m beginning to appreciate the desert beauty more and more even though there is no green grass.  I think the gorgeous weather has a lot to do with it :)