Agriculture in the Desert

We discovered something rather amazing in Yuma.  This area is a major supplier of produce.  Who would have guessed the desert would be loaded with fields and fields of vegetables.

There are miles and miles of crops just like this field of lettuce. 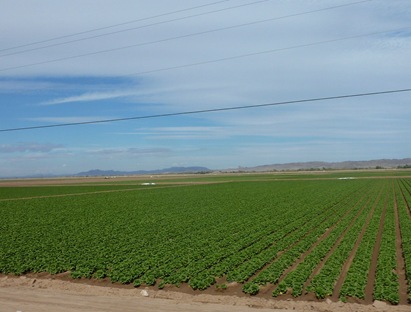 Here’s a field of cauliflower. 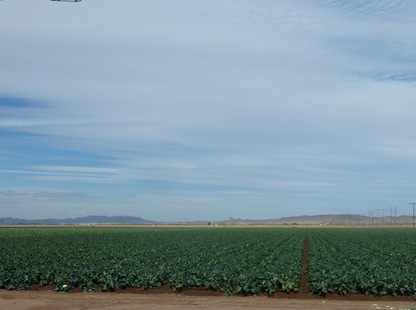 It turns out that years ago some very smart farmers built a series of canals for irrigation.  This region has the most sunny days of anywhere else in the country.  The farmers can plant several crops a year on the same land.  The key is the irrigation.  There is only about 2 inches of rainfall a year, but the farmers found a way around it with the canals.  It’s amazing to see.  They grow lettuce, cabbage, cauliflower, broccoli, and celery just to name a few.  There are also many citrus groves.

A few weeks ago we saw migrant workers harvesting this field.  Now you can see the new crop is already coming up. 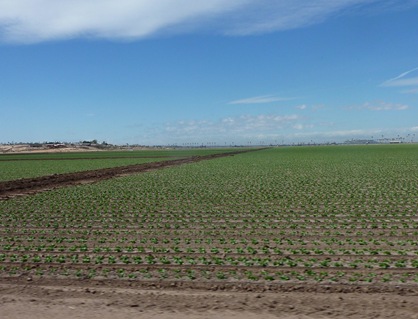 Joan and Al left yesterday to make their way back to Wisconsin and then head to Pennsylvania for the birth of their second grandchild.  Best wishes to everyone!

My cold is still hanging on so we’ve been laying low.  Some walks, some bike rides, some shuffleboard, some card playing and some relaxing.

I’ve also been doing some more work on oDesk.  Last summer I mentioned that I had been hired by a woman in Australia to do some transcription work.  I finished that job, but have since picked up a few more jobs.  I’m diligently working on this to build it to the point where I’ll have some steady income.  We’ll see how it goes.

Tomorrow we move on to Eloy, Arizona to spend a week visiting with Kevin’s Uncle Jack and Aunt Norrine at Los Colinos RV Park.

Posted by RV Khronicles of Kevelyn at 3:49 PM 3 comments: Links to this post