Yesterday we headed about 30 miles south to Padre Island National Seashore. Our first stop was the visitor center. As luck would have it, we arrived just in time to join Ranger Buzz in a guided beach walk.

Buzz was one of the most interesting National Park rangers we’ve ever heard. His talk was super informative without being boring. Before we knew it an hour had flown by and we had learned a lot about the park and the seashore. Padre Island NS is the longest undeveloped barrier island in the world. 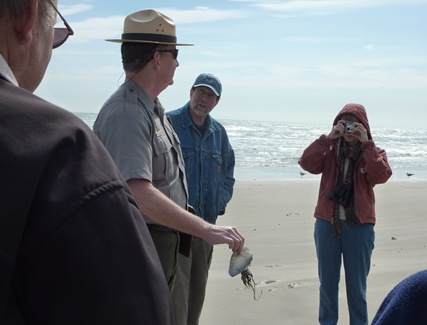 The beach was lined with thousands of Portuguese Man of War jellyfish. We learned they can have tentacles as long as 150 feet. Even if they look dead, you can still get stung by picking one up on the beach so be careful. 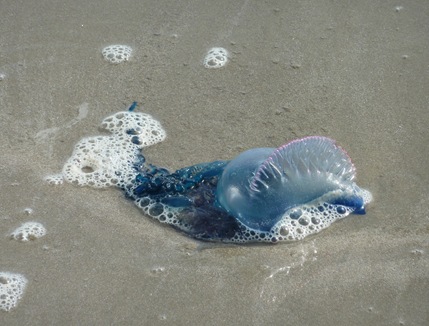 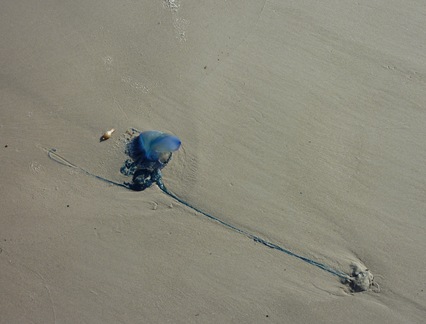 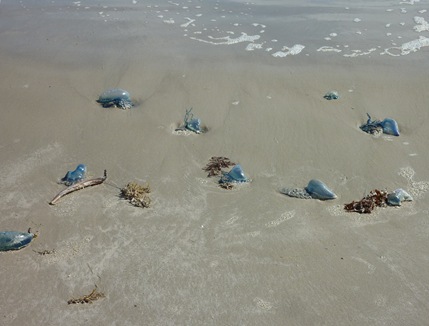 We spent about an hour just wandering along the beach. It was a beautiful sunny day. There were several fishermen along the shore. We saw what looked like a large bird up ahead.

Sure enough, there was a large Great Blue Heron standing right next to the water near one of the fishermen. I couldn’t believe it. I’ve seen lots of them in ponds and marshy areas, but never right on the beach. We got within a few feet of him before he walked away. He did not appear to be afraid of us at all. 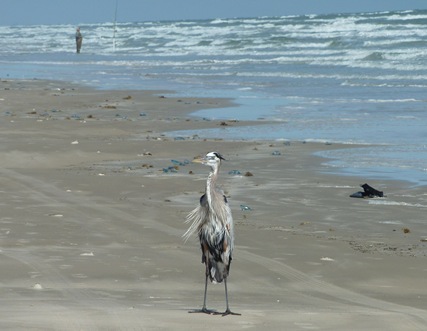 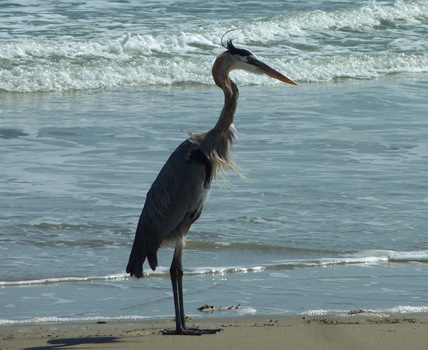 One of the volunteers at the visitor center told us there are several Blue Herons that hang out along the beach looking for handouts from the fishermen. Smart birds!

This flock of Snow Geese was just off the side of the road. 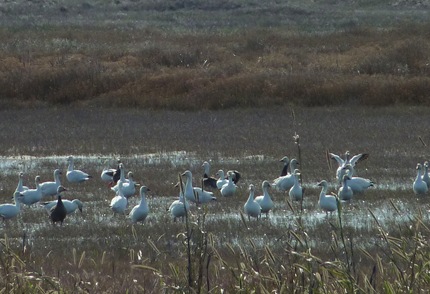 We drove further south until the paved road came to an end. You can drive for another 30 miles or so along the beach, but it is recommended for four wheel drive only. We parked on the beach and walked for another hour along the Gulf of Mexico. Beautiful!!

These birds lined up on the pilings made me think of the gull in the movie Finding Nemo. Mine, mine, mine :) 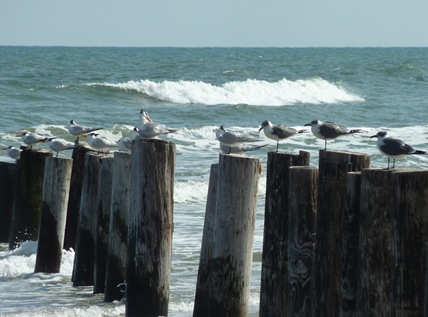 Lots of birds were hanging out along the beach. We saw them eating the jellyfish. They grab one, shake it until the tentacles come off and eat the bubble part at the top. 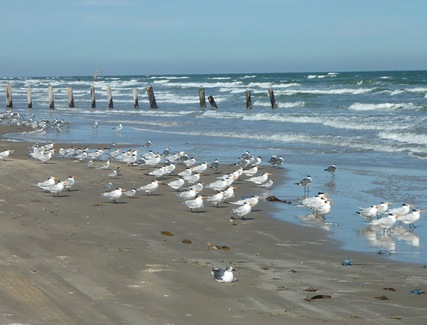 There was quite a bit of garbage along the beach. Ranger Buzz had told us that these beaches gets a lot of garbage due to some converging currents in this area. He said much a lot of it comes from the fishing industry and boats out in the gulf. This broken Styrofoam cooler was from Louisiana. As hard as they try, they cannot keep up with cleanup. In fact, the visitor center gives away free garbage bags for visitors to fill with garbage as they comb the beach. 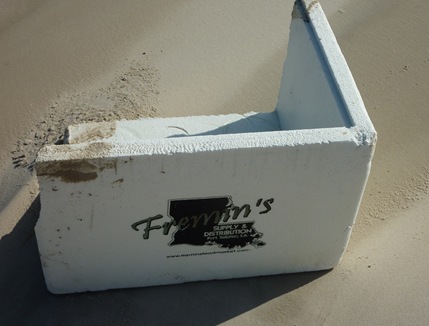 Our $10 admission is good for 7 days. We’re probably going to go back this week to join the afternoon birding tour.

On Thursday we rode our bikes to the 1,200 acre Port Aransas Nature Preserve. There is a mile long boardwalk and path through the marsh. 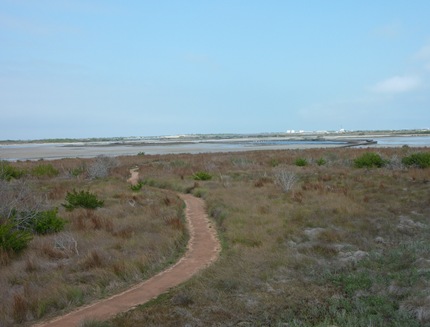 I liked this funny looking bird. I think it’s a Long Billed Curlew. 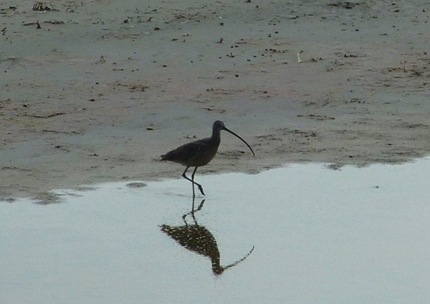 We rode our bikes along a very nice concrete path that led from the nature preserve to another park with a community pool and a skateboarding park. I’m so impressed with this small town of Port Aransas. They have several wonderful parks for their residents and visitors.

Along the path I saw this beautiful guy perched on a pole. I tried to figure out what kind of bird it was, but couldn’t find it. I’m thinking some type of hawk. He sure was pretty. 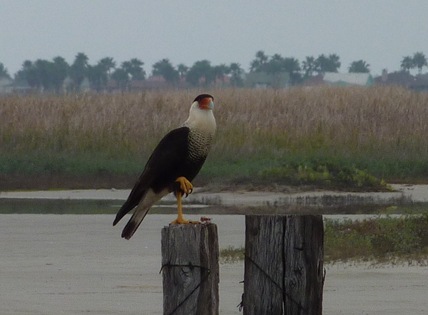 This birding stuff is becoming addictive. I’m discovering that I’m drawn to large or unusual looking birds. I don’t think I’ll ever be a die hard birder, but there are so many birds in Texas, that it’s kind of hard not to get caught up in it. As we drove the 30 miles from the seashore back to Port Aransas, I saw countless egrets and other birds in the little ponds along the side of the road. Amazing!

Posted by RV Khronicles of Kevelyn at 8:44 AM 5 comments: Links to this post