Since we began our fulltime RV adventure in 2010, we’ve had a standard definition DirecTV satellite dish and DVR. We’ve been debating for a few years that we might want to upgrade to HD.

Back in 2010, the installer that set up our system told us that it was much harder to zero in on the HD signals, and we should stick with standard definition. Since then, we’ve seen plenty of people with the HD dish on a tripod, and they told us it was not that hard to set up each time they move.

Yuma is an RVers mecca, and there are several satellite TV businesses. We stopped at RV Connections and spoke to a salesman about what we were thinking. He told us we should have no problem with the HD satellite, and recommended the wireless Genie from DirecTV so I could watch what is on the DVR from the bedroom.

Only problem was that we were not “qualified” for any free upgrades from DirecTV. I called and spoke to two people at DirecTV and got frustrated very quickly. Here’s where Kevin comes in and saves the days. After an hour on the phone with six different people and threatening to go to Dish Network, he got us a free upgrade to the HD system with a wireless Genie. We had to pay $99 for the wireless router, but that beats the over $400 they originally quoted us.

The installer came yesterday and everything went very smoothly. He even provided the eight cinder blocks for the stand. We will be getting a new tripod for this dish. We’re not wanting to haul around all those cinder blocks. 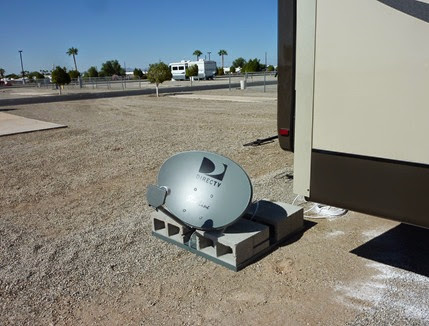 We’ve been relaxing at the resort, riding our bikes in the morning and swimming in the afternoon. All this exercise has helped me lose a few pounds. A never ending battle. There’s a group of people that hang out at the pool most afternoons. We’ve met some very nice Canadians.

It’s still in the low 90s during the day, but next week highs are predicted to drop into the 80s and lows in the high 50s. We have a tee time for Saturday morning at the golf course here at the resort. We’ve also been invited to a party given by the resort for first timers, and pickle ball lessons will start soon.

I’ve been working on some sewing projects during the heat of the day, but my sewing machine was acting up. It’s been giving me trouble all summer, so I found a repair place here in Yuma and took it in. Hopefully, it just needed a tune up. I’m supposed to pick it up tomorrow.

I’ve seen some really beautiful sunrises and sunsets while we’ve been here. Here’s just an example of one of the sunrises. I can never get enough of them! 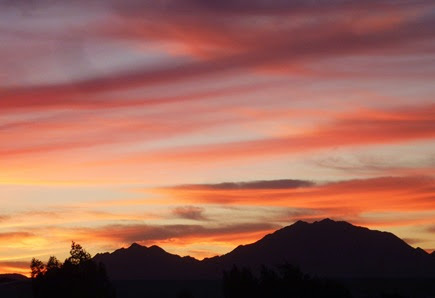 Posted by RV Khronicles of Kevelyn at 9:32 AM 2 comments: Links to this post