Today we drove to downtown Oklahoma City.  Our first stop was the Oklahoma City National Memorial site. I’m sure most of you remember the morning of April 19, 1995 when Timothy McVeigh parked a Ryder truck full of explosives outside of the Alfred P. Murrah Federal Building. At 9:03 a.m. the truck exploded and caused the death of 168 innocent people.

The memorial is a peaceful place to remember and honor the people who died, the survivors, the rescuers and everyone affected by this senseless act. 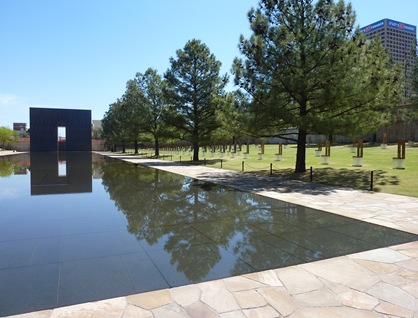 At the back right hand side next to the gate is part of the original wall of the building.  It has a plaque on it with the names of the 680 people who were injured, but survived. 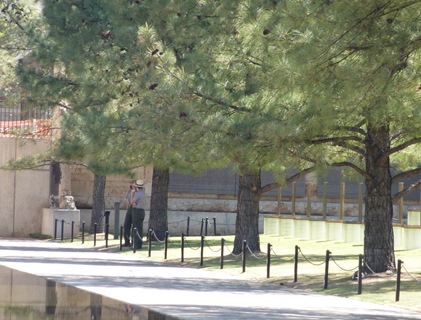 The names are on those plaques behind the trees. The plaques are made of granite rescued from the lobby floor of the building.

Across the street is a church.  The rectory of the church was destroyed by the blast.  In it’s place, the Archdiocese of Oklahoma City has erected this statue of Jesus. The words on the statue are a quote from the Bible, “And Jesus Wept".  The statue is facing away from the site.  This was a really moving visual for me.  I can certainly imagine that Jesus wept at the evil that happened at this place on that day.

Across the street behind the statue, you can see part of the original fencing that was placed around the site after the explosion.  Next year marks 16 years since the explosion, and people are still leaving memorials at the fence.

In addition to the outdoor memorial, there is also a museum on the site.  We didn’t go in the museum.  I really didn’t want to hear the audio and see the images of the tragedy.  Visiting the site and honoring those killed was enough for us. Prior to 9/11, this was the the most destructive act of terrorism on American soil.

On the way back, we drove past a church called LifeChurch TV. It has a massive cross outside of it.  They must be having a carnival or something.  There is this inflatable ape next to the cross.  It looks like King Kong is going to try to climb the cross.  We’ve noticed a great many crosses and churches in this area.  I’m wondering if it’s part of the Bible Belt. 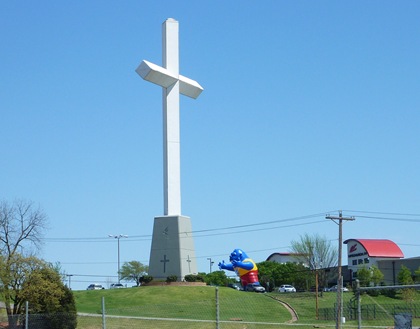 The weather today was gorgeous.  It was sunny with a high of 80 degrees and calm winds for a change.  Perfect.

When we got back to the camper, there were two new rigs next to us.  They’re from Wisconsin, too.  We spent a while sitting outside and visiting with them.  One of the couples ordered a new Jayco Pinnacle and is picking it up next week when they get back to Wisconsin.  Cool!

Posted by RV Khronicles of Kevelyn at 8:08 PM 2 comments: Links to this post