Even though the park campground was fully booked this past weekend, it was so quiet and peaceful.  Many of the people told us they were stopping here for the weekend on their way to the EAA Fly-In in Oshkosh this week.

It was still quite hot and there just weren’t many people outside. I think some people left for the day and others were fishing.  We only sold $34 worth of wood.  The last time we were fully booked for a weekend, we sold $198 worth of wood.  I think it was too hot for campfires.

I’m not complaining, it was sure a nice and peaceful weekend.  Just kind of strange to be outside and not hear anything.

Last week we didn’t golf at all. It was just too darn hot. So, this morning Kevin an I went back to Fox Lake Golf Club.  I was doing really well through the first six holes, on track to have my best score of the year.  You guessed it, I fell apart on the last three holes. I still had an okay score, but it could have been so much better.  Kevin also had an up and down day. Oh well, we still had a great time together. Sure beats going to work on a Monday morning :)

There are four parks with campgrounds in Dodge County (that’s the county we’re in.)  Each park has until August 1st to submit a budget proposal for next year. They are having a contest between the parks to see which park submits the best money saving, revenue generating ideas. The winning park gets an extra $500 for a project in the park.

We talked to our boss, Mike, and told him some of the ideas we have for improving the park. He told us to email our ideas to the Parks Director.  We’re hoping the budget for next year will include full hook-ups for our host site.  If we win, maybe the extra money can help us get those hook-ups. I’ll let you know what happens.

I don’t have any pictures again today. So, I’m showing you a picture of the hard work Kevin did today. The park has some teeter-totters and there were some tires laying on the ground under each seat. The Parks Director wanted them buried in the ground. So, here’s what Kevin did for a few hours today. Dug some pretty deep holes and buried the tires. Looks good, doesn’t it? 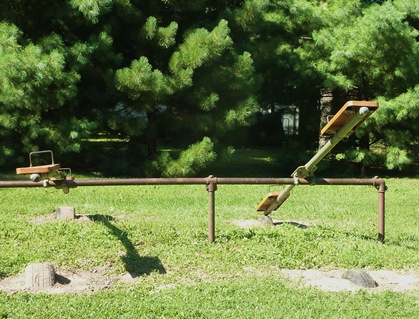 I tried to get a picture of a plane landing on the lake today, but I was too late. We’ve had quite a few planes fly over this weekend, I’m guessing on their way to the EAA.  I was looking out the window and all of a sudden a sea plane was landing on the lake. Cool! By the time I got out there, it was around the corner, so no picture.